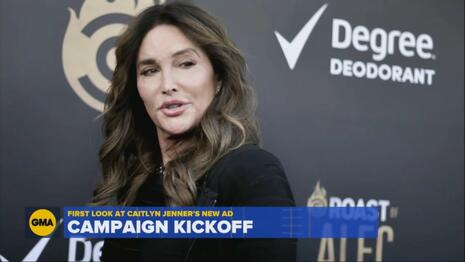 Deadspin has rudely downgraded Caitlyn Jenner from transgender icon to Republican villain. In 2015, Jenner was hailed by Deadspin as a more than fitting recipient of ESPN’s Arthur Ashe Award for Courage, but the honeymoon is definitely over. Now Jenner is trash because the California gubernatorial hopeful says it’s unfair for boys to compete in girls’ sports.

Sam Fels, the Deadspin writer, condemns Jenner (appearing in photo) for explaining why she opposes “biological boys who are trans competing in girls’ sports in school. It just isn’t fair. And we have to protect girls’ sports in our schools.” He wrote that Jenner “was all to happy to jump on the latest Republican Hey-Look-Over-There issue," making her just as bad as George W. Bush was for opposing same-sex marriage when he was president.

In condemning the 71-year-old Jenner, a Republican and the 1976 Olympic decathlon champion, Fels wrote:

“It’s disgusting and hateful and nakedly ignorant, but that’s where we are. Why anyone wants Jenner to comment on anything, much less even be anywhere near governing the state, is a mystery. But then again, logic packed up its bindle and stuck a thumb out of this place long ago.”

Nearly six years ago, Deadspin was defending Jenner for winning the Ashe Award after Bob Costas questioned ESPN’s choice for the honor. “No one should really be upset by this; nodding to the ideal of equality is a fine use of ESPYs airtime,” wrote Deadspin’s Tom Ley.”:

“ … Jenner is one of the most famous athletes in American history. A former Olympic champion who once was as big a deal as, say, Michael Phelps and at one time had a legitimate claim to being the finest athlete alive publicly coming out as transgender—an act which takes more than ‘some measure of personal courage’—is a very big sports story. In fact, Jenner seems like exactly the kind of person who should be receiving this award, which has previously been given to people with far more tenuous connections to the world of sports. …”

Deadspin no longer gives love to Jenner because the candidate has joined the latest Republican culture war folly. Sixteen years ago, it was gay marriage. The younger and “dumber” President Bush “didn’t have any answers on real issues that actually affected people’s lives, and was in the midst of two wars he was fucking up royally that costs hundreds of thousands of lives … ,” Fels ranted.

Furthermore, Republicans are “stupid” and “bonkers” for concocting a culture war on gay marriage. Bush used the issue to stir the base up just enough to win re-election in 2004.

Fels theorizes that gay marriage has not destroyed America’s heartland, and the Right needs a new hollow issue to support. “They don’t have any answers on how to make anyone’s life better. So transgender athletes have become the diversion,” he wrote.

Five states have implemented laws or executive orders aimed at protecting the integrity of girls sports. It this truly was a non-issue, as Fels insists, then the Left would have no need to get so worked up about the legislation. Instead, we see media hysterics and Jenner getting tossed overboard by the Left.