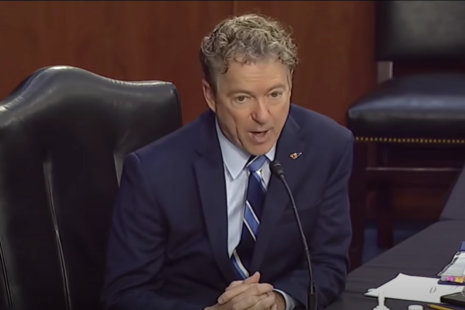 By attacking transgender rights, Republicans are dangerous, cruel and playing on fear and hate. They must be stopped, shrieked Deadspin blogger Jesse Spector on March 3.

The GOP is also engaging in “culture war bullshit” because they lost the marriage equality debate, Spector roars. “When they’re not busy trying to keep people from being able to vote, Republican state legislators these days are obsessed with the issue of transgender athletes in high school sports.”

Senator Rand Paul’s (seen in photo) recent confirmation hearing questioning of assistant health secretary nominee Rachel Levine (a male who identifies as a woman) is what triggered Spector. He slammed Kentucky’s “second-worst senator” for calling transition surgery what it actually is: “genital mutilation.”

Spector faulted Republicans because only one percent of Americans are confused about their gender, but that miniscule number actually plays into the hands of those who oppose bending gender rules for such a tiny group. Especially when it only appeases the LGBT movement while putting women and girls at a disadvantage in sports.

The stone throwing continues. The GOP is “full of shit” and cruel for purposely targeting trans kids because high school is socially tough. “It takes a special kind of asshole to be like, ‘yeah, there should be laws that make things even harder for these kids,’ ” Spector wrote.

Spector brought up a point used by The Associated Press as an attempt to discredit Republicans. AP said it found no examples that the Republicans pushing state legislation to prohibit transgenders from competing on opposite-sex teams in high school sports can cite "as justification for their proposed persecution of kids who just want to play sports.”

Spector adds that it basically amounts to “a couple of high school girls who were sprinters in Connecticut a few years ago and won some races, which led some bigoted sore losers to sue.” False. Those “girls” were boys, named Terry Miller and Andraya Yearwood, who literally were crowned state champions in girls’ track and field in Connecticut. The disadvantaged girls filed a lawsuit through Alliance Defending Freedom in an attempt to protect the integrity of female sports.

“Democrat” spin also whined and moaned about people who misgender transgenders. They are “bigots” trying to “invalidate trans people’s experience and existence.” It’s most obvious for those athletes who magically convert themselves from males to females, but not as much for female-to-male trans.

That AP story and Spector’s screed both referenced Mack Beggs, a girl who claimed she was a guy and suffered the indignity of having to win two state wrestling championships as a girl. Spector missed the point on Beggs, though, because the big complaint opponents had about her was that she was bulking up on testosterone and out-muscling female rivals. She’s now in her third year on a college men’s wrestling team, but has never competed.

In his takedown of Republicans, Spector says they are not serious people, but unfortunately, they have serious power. “Just because they’re full of shit doesn’t mean that they can be ignored, and just because these bills would affect the tiniest sliver of the population doesn’t mean that they aren’t a first step toward delegitimizing trans people’s existence entirely. They must be stopped.”

The Biden Administration is fully on-board with transgenders in sports, has withdrawn the Department of Justice’s past endorsement of the Connecticut lawsuit and, if confirmed, Levine will be the highest-ranking transgender in the federal government. USA Today said she faced “transphobia” in the “historic” Senate hearing.