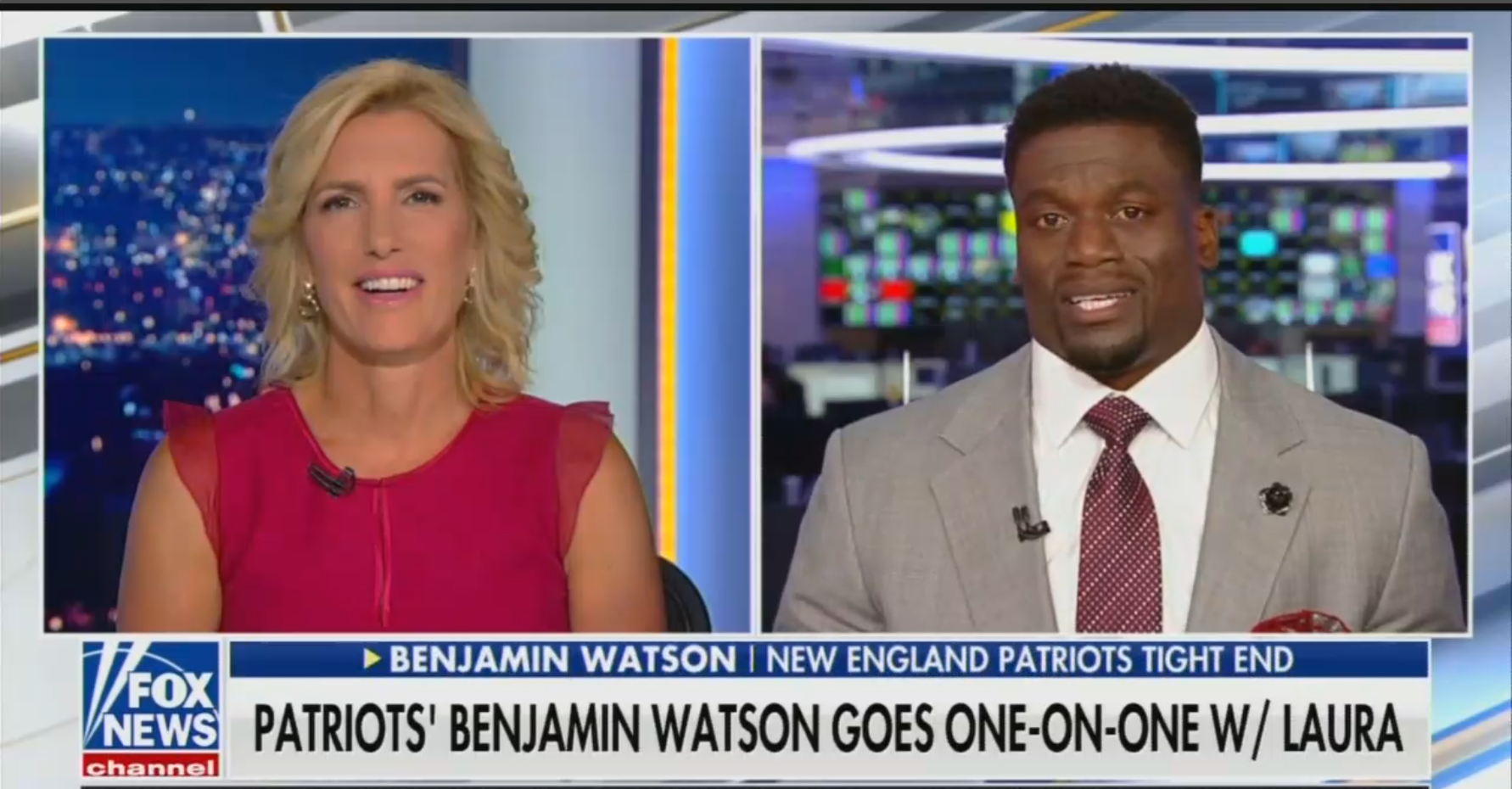 The Boston Globe, Yahoo! Sports and Deadspin may have established new lows Tuesday for sports media distortion. All three reported that, on Monday night's The Ingraham Angle, host Laura Ingraham's interview with guest Benjamin Watson, tight end with the New England Patriots, didn't go the way she wanted it to and she angrily cut off the conversation. That's far from the truth.

Watson followed Focus on the Family president Jim Daly's appearance, who defended his organization and New Orleans Saints quarterback Drew Brees for a Focus-sponsored PSA on Bring Your Bible To School Day that drew strong opposition from LGBT advocates. A devout Christian believer and former teammate of Brees, Watson also defended him, telling Ingraham that the media create headlines and pro football players support a lot of causes that, to some, are controversial.

The Watson interview lasted six minutes, the majority of which was spent talking about the Brees issue, but the three media cited above all ignored that part and focused on the final two minutes spent discussing Jemele Hill's recent article in The Atlantic calling for segregation in college sports. The two politely disagreed and as she wrapped up the segment, Ingraham said she'd gladly have Watson back on the show again to talk about an abortion documentary the pro-life NFL player is working on.

But read how the media mentioned above butchered it in an effort to intentionally bash Ingraham and mislead their readers. They portrayed it as a hostile interview cut short by an intolerant conservative talk show host based solely on a viral video tweet by The Daily Beast's Justin Baragona that didn't give the full context and made it look like the segment ended earlier than it actually did. It's pure distortion.

"When it became clear Watson wasn’t agreeing with her stance, Ingraham began rolling her eyes and trying to cut him off with dismissive 'yeah's. She then shut down the interview, saying 'Duke would have not been thrilled with your not being there.' But that wasn’t the point of Hill’s article; a Duke or an Alabama will be fine without one elite-level athlete, but that same athlete could completely change the face of an HBCU program.

"Watson (currently serving a brief drug suspension) will return to the field in October against the Redskins, but he might not be returning to Ingraham’s show anytime soon."

Busbee said Watson had been invited onto the show "with the apparent expectation that Watson, who played for Duke and Georgia—the bluest of blue-chip schools—would dunk on Hill’s argument. Instead, Watson came out in support of Hill’s arguments ... ."

The Yahoo! writer also attacked Ingraham for telling LeBron James (then with the Cleveland Cavaliers) to just “shut up and dribble” after he criticized President Donald Trump. Watson then went on CNN and said Ingraham's remarks had "racial undertones." So it was public knowledge that he and Ingraham disagreed on the issues of race and athletes talking politics. Also, last year Watson appeared as a guest on The Ingraham Angle, and the two had a cordial discussion about the NFL's controversial social justice initiative. They peacefully disagreed, and he was invited back on again this week.

The Boston Globe's Nicole Yang, whose story was posted five hours after Busbee's story and followed the same anti-Ingraham agenda, wrote that as Watson disputed Ingraham's claim of segregation, she "proceeds to cut him off multiple times, roll her eyes, and end the segment."

Yang's story said Watson was making "great points" in the interview and praised him for being vocal about race relations throughout his NFL career.

"It became clear almost immediately that Watson was expected to share Ingraham’s sneering contempt for Hill’s argument, and when he did not, Ingraham was reduced to blurting out middle-school-grade retorts and awkwardly shuffling Watson off camera. It ruled."