Hey, Tom Brady, while you and your coaches and teammates are preparing to take on the Los Angeles Rams in Sunday's Super Bowl, you would do well to trash that MAGA hat sitting in your locker. That's the advice you're getting from Daniel Radcliffe, star of the Harry Potter movies, who tells Brady he's terrific and he's behind him, but the hat must go. President Donald Trump is, after all, as bad or worse than Potter's disgusting antagonist, Voldemort.

On Sunday, Variety ran a story and tweeted video of Radcliffe, a Brit elitist, being asked if Brady should retire. He answers ...

"No. But, like, he should just stop winning things. And take that MAGA hat out your locker. I feel like that was the moment where, as a country, we were all like, ‘Oh come on, dude. We all want to be — you’re awesome — behind you, don’t put that in there.” 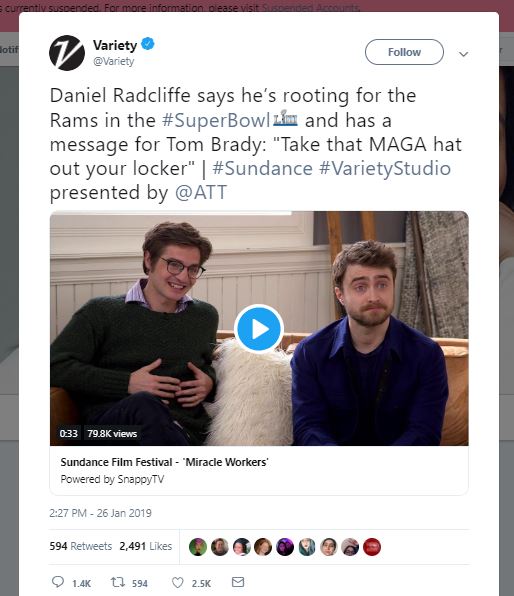 Brady, his coach Bill Belichick and Patriots' owner Robert Kraft have all had friendships with Trump.

Harry Potter movie people have a well established track record of bashing Trump and the right wing. J.K. Rowling, the author of the Harry Potter books, previously called Trump worse than Voldemort after the president's travel ban in 2017. She tweeted, “How horrible. Voldemort was nowhere near as bad.” In the Potter series, Voldemort is the archenemy of Harry Potter. Voldemort was an evil wizard and also referred to as "Dark Lord." Comparing Trump to this fiend is high insult.

The Trump-as-Voldemort meme was also thrown around by the left-stream media during the 2016 presidential campaign. Sky News, a British news outlet, asked Radcliffe then about the comparison, drawing this response:

“I sort of feel like Donald Trump might not be as ideologically pure as Voldemort. Because my thing on Trump is that, you know, he feels like more of an opportunist. I don’t know how much of this stuff he’s saying he actually really, really believes. And he sort of hides behind the sort of thing, 'Oh I’m just an entertainer,' and all that. But yeah, that comparison is certainly not without its merits.”

Radcliffe once predicted the “right wing” emphasis on national identity and “patriotism” would inevitably lead to terrorism. He also criticized candidate Trump as someone who "stirred up" feelings of "fear and hatred".

An actress from Potter fame, Noma Dumezweni, was asked last year at the Tony Awards if Trump should watch her play, Harry Potter and the Cursed Child. “No,” she said, “Anyone else, yes.” Dumezweni also said that the play is “very important” in the current political situation. Which is code language for progressives acknowledging an evil Republican lives in the White House.