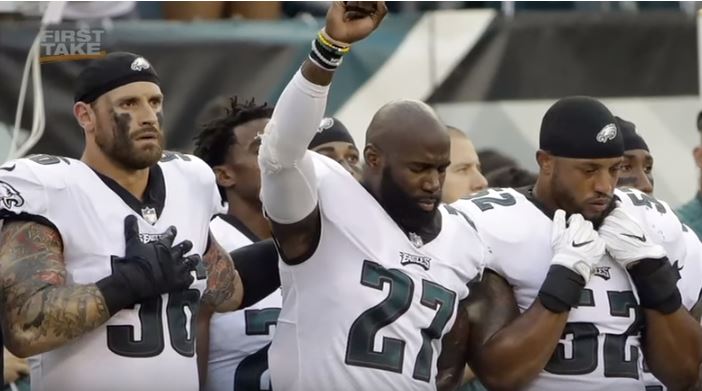 The very vanguard of the far Left media is reacting bitterly today to the NFL's new policy banning football players from disrespectfully kneeling during the national anthem. Editorialists for The New York Times and The Washington Post, as well as USA Today, acted as if the hated Republican Party had just taken over the NFL in their denunciations, and the ACLU condemned the NFL's actions as "un-American."

The quickly adopted narrative of the Left is that the league's white racist owners brought an end to the protests merely to please the president they fear, Donald Trump. Not that they had any other choice but to stop the serious loss of support from fans alienated throughout the 2016 and 2017 seasons. Many have sworn off the league forever. The owners foolishly allowed the protests to choke their lifeblood for two seasons, but finally came to their senses and decided to listen to the fans, come in from the rain and put an end to the foolishness.

Nevertheless, The Times' editorial board concluded it's all about the fantasy that owners were unable to resist pressure by Trump:

"The owners of the National Football League have concluded, with President Trump, that true patriotism is not about bravely standing up for democratic principle but about standing up, period.

"Rather than show a little backbone themselves and support the right of athletes to protest peacefully, the league capitulated to a president who relishes demonizing black athletes."

"(T)he NFL resorted to the Trump-pacifying language 'respect for the flag and the anthem.' That phrase is used four times in the policy statement. The words 'social justice' are used just once.

"Instead, it chose to talk about 'respect,' as if giving a shout-out to Trump, the man who hijacked the issue and turned it into an oversimplified referendum on patriotism."

An unnamed reporter asked Stephen A. Smith, a liberal talk show host on ESPN' First Take program: "Should the NFL be afraid of our President?" Here's the response:

"Yes, they should. Yes, they should. And that's exactly what I alluded to yesterday, talking to (co-hosts) Will (Cain) and Max Kellerman. ... The President, whether you like it or not, whether you like him or not, is the president of the United States of America. Over 62 million people voted for this man. And when you have the power that he has and you have the influence that he has, you have the ability to hijack an issue like the Colin Kaepernick protest and turn it into something that it's not about, turn it into an issue of patriotism."

One of the most un-American organizations in the country, the ACLU tweeted:

“Telling peaceful protesters to leave and do it behind closed doors is dangerous and un-American.

“The NFL players’ protests have never been about the military or the flag. They’re about police brutality and white supremacy. Failing to protest injustice in America is not patriotic; it’s dangerous.”

“It is a sad thing … a dark day in American sports. The thinking that this is somehow taking politics out of football is ridiculous.”

Aside from the Trump phobia and cries of un-Americanism, the media continued the same line of criticisms they've expressed toward those opposing the protests for the past couple years. Typified by this excerpt from The Times:

"Let us hope that in keeping with the league’s pinched view of patriotism, the players choose to honor the letter but not the spirit of this insulting ban. It might be amusing, for example, to see the owners tied in knots by players who choose to abide by the injunction to 'stand and show respect' — while holding black-gloved fists in the air.

"The owners responded in the grand old American tradition of blackballing people you disagree with."

"The league has now decided it will also override the best interests of America and try to substitute a phony pageant of solidarity for a powerful civics lesson."

"The NFL owners, most of them old white men who would rather be left alone to count their money, finally have figured out how they want to defuse player protests. They’re going to attempt to shove the issue into the bowels of stadiums and eliminate the powerful and controversial image of athletes making pleas for equality during the national anthem. Throw those problems in the closet and block the door. If nothing else, it’s less expensive than tearing up the turf to bury the players and their societal concerns."

Jarrett Bell of USA Today called the new policy the "Colin Kaepernick Rule," after the former San Francisco quarterback who started the protests. Bell doesn't believe Wednesday's policy change will squash the protests; he does think the NFL has merely added fuel to the fire. Furthermore:

"This is a bad look for the NFL wrapped in control and retaliation, with overtones of a racist mentality, to snuff out resistance."

Bell referred to another claim by the ACLU's Robinson:

“It’s like, ‘Go get in the back of the bus or sit in a dark, quiet room,’ because you’re not allowed to peacefully express yourself during the anthem.''

Straying from the topic of protest to something the NFL welcomes with open arms, Bell demonstrated his colors apparently don't run red, white and blue: "There apparently are no plans to alter the presence of military salutes on NFL stages, which often are accompanied by giant American flags. In crafting an anthem policy that punishes dissenters, the NFL is presenting quite the un-American display of patriotism."