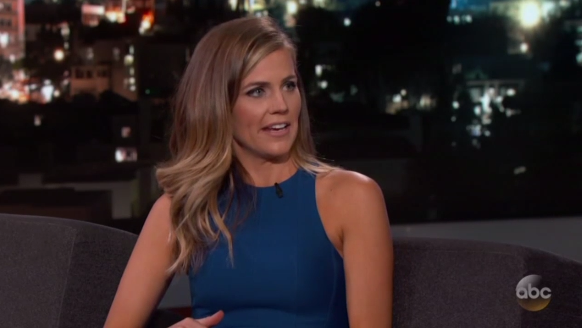 Mistake-prone ESPN just keeps making one bad decision after another. The list of errors in judgment is rapidly growing and badly damaging the sports network. In recent days ESPN finally got around to correcting its two latest mistakes: 1) suspending Sports Center co-anchor Jemele Hill for inappropriate tweets and 2) and ending a brief partnership with Barstool Sports.

One of several vulgar media catering to left-wingers, Barstool and ESPN entered into a partnership to create a series called “Barstool Van Talk.” After revelations of Barstool's 2014 misogynistic trashing of ESPN's Samantha Ponder (see photograph) came to light, however, ESPN ended the series Monday after one episode.

A Youtube video by Portnoy viciously attacked Ponder as well:

Every time she Tweets I wanna puke all over my computer. ... No one who watches Game Day wants to see a picture of her and her ugly kid. Nobody cares, Sam Ponder. We wanna see you sex it up and be slutty, not be some prude, f------ jerk who everybody hates, and is married to the worst quarterback (Christian Ponder) who wears the ring, and God-first in this and that. Shut up! That's not what you're there for. ... There's nothing worse in the world than in people who think we give a f--- about your kid. I don't give a s--- about any kid ever!

No self-respecting media organization would go within a hundred miles of people like this. But ESPN did and then, when the heat came, its president, John Skipper, initially stood by the partnership with Barstool Sports. Yesterday, though, he finally wised up and called it game-set-match with Barstool:

Effective immediately, I am cancelling Barstool Van Talk. While we had approval on the content of the show, I erred in assuming we could distance our efforts from the Barstool site and its content. Apart from this decision, we appreciate the efforts of Big Cat and PFT Commenter. They delivered the show they promised.

How nice that this disgusting group of vile misogynists delivered a show! And how bizarre is it that Skipper thought he could partner with Barstool and distance itself from it at the same time!

That's not surprising. Erring is what ESPN does best and it never apologized or admitted any error in several other lapses in judgment. This is the organization that gave the Arthur Ashe Award for Courage to Caitlyn Jenner, fired Curt Schilling for his personal views, politicized Sports Center and other programming, over-extended itself with mega-billion-dollar broadcasting rights resulting in mass layoffs, initially overlooked Hill's description of President Trump and his supporters as "white supremacists" and more.

Instead of just sticking to sports, ESPN is spinning its wheels covering for bad management. It's alienating a lot of its customers and may never win them back.

Portnoy and Barstool don't deserve any cover from ESPN's blunders though. Madani's post reveals that Portnoy is unrepentant. "Three years ago, I guess I called Sam Ponder a word that in hindsight I wish I took back so this didn’t happen. But I don’t take back the rift, I don’t take back any of it.” He claims ESPN cancelled the show due to pressure, but the "controversy reinforced the importance of Barstool Sports." And he added, "ESPN needed us more than we need them.”

Additionally, Ponder's complaint was only a "grudge move," Portnoy said without shame. "We attacked her. She waited for three years to drop revenge on our heads the night before and she got accomplished what she wanted to get accomplished.”

ESPN's shoddy performance in this episode and its so-called "commitment" to equality and inclusion can hardly be reassuring to the women employed at the network.