What a time to be alive! M&Ms has made its Green M&M mascot less sexy. All is well with the world. 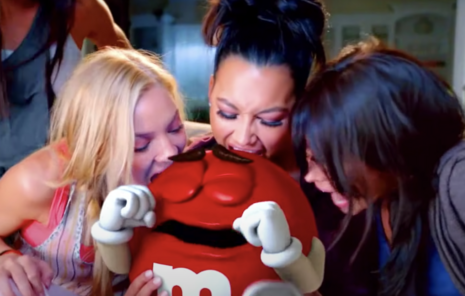 Yep that’s a real news development and it’s not just about the green M&M losing her high heels and having her “come hither” demeanor turned way down. All the zany M&Ms characters that fill the candy product’s ads are getting their toxic personalities adjusted for the sake of inclusivity, as declared M&M’s parent company Mars.

Well this is downright pathetic.

Global VP of M&M’s at Mars, Jane Hwang recently told business outlet Adweek, “We took a deep look at our characters, both inside and out, and have evolved their looks, personalities and backstories to be more representative of the dynamic and progressive world we live in.”

Ah yes that’s right because our decision to eat M&Ms heavily weighed on the character traits of the ad’s cartoon characters. I previously enjoyed M&Ms because I really loved objectifying the anthropomorphized piece of green candy-coated chocolate and her sexy voice.

Thankfully pervs like me will be snapped out of this lust by such soul-saving corporate decisions.

The outlet described how the other M&M cartoon characters will be lobotomized for the sake of appealing to a more sensitive generation. And no, we are not talking about M&M consumers’ dental problems. We are talking about their social justice sensitivities.

“Red, for instance, will be less bossy. Orange will acknowledge and embrace his anxiety. Green, who will come across as more confident, has traded in knee-high boots for casual sneakers,” the piece wrote. So red will be less toxically male, and orange will be the sugary poster child standing against mental health stigma.

And Ms. Green M&M isn’t the only sexpot that’s being told to put some clothes on. The brown female M&M has “transitioned from high stilettos to lower block heels and a fresh pair of glasses.” Oh yes, because she’s sexy AND smart.

Though I don’t know, Mars. You might be playing right into the hands of guys who fetishize the sexy librarian look. Might we suggest putting her in a brown paper bag to be completely safe. Or how about putting her in a Burka? Actually yeah! Think of it! You’d get even more diversity points!

Hwang added that the green and brown M&Ms will team up and be “force supporting women, together throwing shine and not shade.” Remarkable! Really makes me want to eat candy!

In addition to this marketing idiocy, Adweek mentioned that M&Ms “will stop attaching prefixes to the characters’ names to prompt people to focus more on their unique personalities rather than their gender.”

Well even if they removed peanut M&Ms from their candy lineup, M&Ms will always contain nuts. This is insane stuff.