Remember guys, conservative parents concerned about what their children are exposed to might be extremists, or worse, domestic terrorists. On the other hand the staff teaching kids pernicious CRT lessons, disturbing LGTBQ and trans orthodoxy and allowing Satanic afterschool programming are noble victims of the militant parents.

Yes, you read that correctly: a Satanic after school club is the latest abomination to pop up in a public school.

According to yaf.org, “Jane Addams Elementary in Illinois agreed to host multiple events sponsored by The Satanic Temple, specifically targeted at children.” In its piece the conservative outlet featured a photo of a disturbing club’s flier that was advertised to school children. 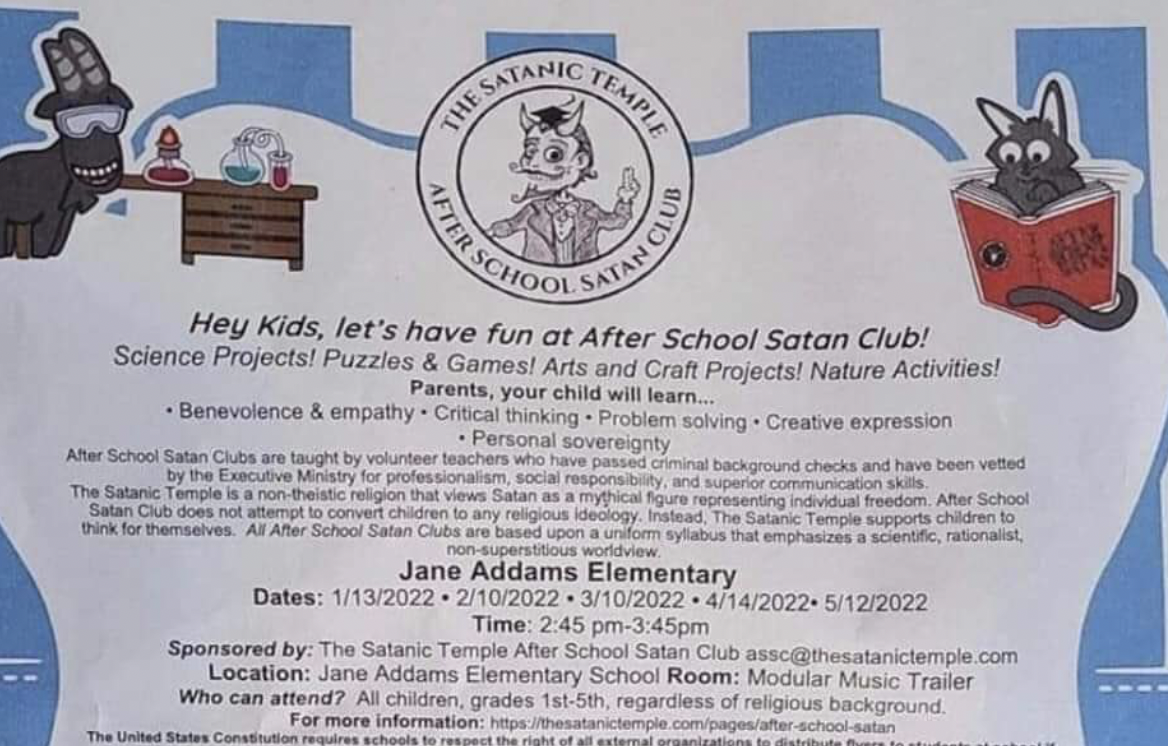 The club’s logo is prominent at the top of the flier. It depicts a cutesy, cartoonish Satan, dressed like a schoolteacher and adorned with goat-like horns. Oh how great that we get to make the devil appealing to schoolchildren! Around the image of lil’ Luci is a banner featuring the name of the club which is, “The Satanic Temple After School Satan Club.”

Ah so this is the K-12-oriented offshoot of “The Satanic Temple,” that group of religion haters that demand governments across the country remove Christian imagery from government buildings or courthouses, or give equal space to Satanic symbols. Most famously, the Satanic Temple placed a statue of Baphomet (a particularly grotesque depiction of Lucifer) near the Arkansas State Capitol in 2018 in protest of a statue of the Ten Commandments that had been erected there.

The Satanic Temple people describe themselves as less Satanic and more pro-free speech and pro- religious freedom, in the sense that they hate when America recognizes the Christian God that gave its people their rights. That’s not separation of church and state, man.

Really, they’re invoking Satan for the destruction of Christian imagery. And, whether they worship Satan or not, they’re still doing the job for him at the end of the day.

Back to the diabolical after school program. The club’s flier features a disturbing tagline which reads, “Hey kids, let’s have fun at after School Satan Club!” Yeah kids, that doesn’t sound weird at all.

The paper then tries to reassure parents that at the club they will teach kids “Benevolence and empathy, Critical thinking, Problem solving, creative expression, and personal sovereignty” – of course outside the Judeo-Christian framework of morality. That sounds like a recipe for disaster.

You know who else pursued “personal sovereignty” outside of God’s kingdom? Yeah, the devil himself.

Also what systems of “benevolence and empathy” divorced from Christianity have we seen crop up in recent years? Black Lives Matter and Antifa. And we all know what kind of fulfillment those groups brought to our society.

Towards the bottom of the flier, there’s a permission slip for parents to sign to allow their kids to join the club. The line they can agree to literally says, “Yes, my child has permission to attend the After School Satan Club.”

Any parent who signs their child up for this should receive their “dumbest parent of the year award” upon turning in these permission slips.

Teachers are making kids eat outside in sub-freezing temperatures while they eat in the warmth... because of "safety."@RealBrittHughes has a few things to say to these failures of teachers putting themselves over kids in the latest episode of Reality Check! pic.twitter.com/qfT1iJyPVL