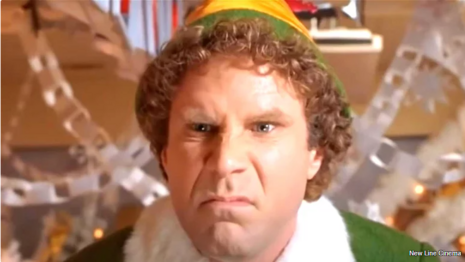 If Business Insider writer Esme Mazzeo goaded me into calling her “‘elf’ one more time” and threatened me with anger and maybe even violence for doing so, I'd still be tempted to call her an “angry elf” because that’s what she is for her insane attempts to get a classic holiday movie cancelled on Christmas.

Yes, online publication Business Insider went for its best Ebeneezer Scrooge impression (or was it the Grinch?) on Christmas Day. The outlet’s “Entertainment/TV Fellow” Esme Mazzeo sat down and watched the Will Ferrell Christmas movie Elf, let herself be offended by it and is now condemning the movie as mocking “cognitively-disabled adults.”

Uh, okay? How about Ms. Mazzeo is offensive because her piece, NOT Elf, insults our intelligence?

In a December 25 piece titled, “Elf makes fun of disabled adults through Buddy — whether purposefully or not,” Mazzeo wrote, “almost 20 years later, it still baffles me how offensive it is to cognitively disabled adults.”

First of all, who publishes a negative piece like this on Christmas Day? Even on the most happy of days, some people can’t find a moment of joy. She should have just written “Bah Humbug” and been done with it. And, secondly, how is Buddy the Elf, the character played by Mr. Ferrell, cognitively disabled? Wasn’t he just a human who had issues because he had been raised by magical elves?

Mazzeo wrote, “But I couldn't sit through Elf for more than 10 minutes without feeling offended. After forcing myself to sit through the whole film, I'm even more confident that purposefully or not, ‘Elf’ makes fun of cognitively disabled adults through Buddy.”

Mazzeo sits on a throne of lies. Again, the movie provides us no proof that he’s mentally challenged. Although, we do learn that he can be a self-proclaimed “cotton-headed ninny-muggins.”

Merry Christmas everyone! Sorry to ruin your good cheer but I worked really hard on an essay about why I can't sit through #Elf unless I must and y'all should read it. https://t.co/jgRtXxAEqM

She/Her just had to do it!

Anyways, we’re not going to fixate on it. We’ll leave that to Mazzeo who is now using her platform to show how Hollywood exploits the health problems of fantasy holiday characters. Thank heavens for the media, right?

Mazzeo explained, “He's referred to as ‘special’ several times while at the North Pole. His toy-making skills are not up to par and he has to take a post reserved for ‘special’ elves.”

Again, isn’t he just “special” because he’s a different biological entity to elves and therefore does not adapt to life on the North Pole as well? And, conversely, since he’s been raised in North Pole culture, that makes him strange in the eyes of cynical, busy New Yorkers.

“Buddy eating cotton balls, running toward moving taxi cabs, and even exposing a department store Santa as fake doesn't inspire me to laugh. Instead, these moments made me wish he had a real support system in his life.” Does someone need a hug?

Wow, we wish Mazzeo the best, but if even a simple movie about spreading Christmas cheer offends her, she may have bigger problems than Buddy the Elf’s fish-out-of-water Christmas antics.