Little Miss Champagne Socialist and Congresswoman Alexandria Ocasio-Cortez (D-NY) could have violated congressional ethics with her recent attendance at the uber elitist Met Gala in her designer “Tax the Rich” ball gown. 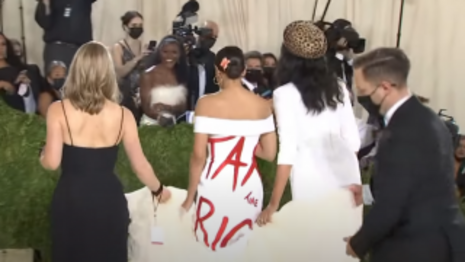 According to The Washington Times, one watchdog group has filed an ethics complaint with the Office of Congressional Ethics on September 14, after the U.S. Congresswoman attended the exclusive high-society party, for which tickets are $30,000. AOC insists she never purchased a ticket. A Met spokesperson confirmed that she was there as a “guest of the [Metropolitan] Museum [of Art].

The American Accountability Foundation asked the congressional office to “immediately open an investigation” into whether AOC received a ticket as an illicit gift.

AOC’s attendance at the gala was a wildly successful publicity stunt that paradoxically drew attention to her hypocrisy. Here was a politician, who constantly cries about rich people and their abuse of the system, going to one of their parties, schmoozing it up with them, and then telling people she was trying to hold said rich people accountable with the not-so-subtle “tax the rich” messaging on her dress.

Conservatives didn’t buy it, accusing the politician of enjoying elitist prestige while using her dress to virtue-signal against said privilege as a shield from criticism.

Apparently it wasn’t enough of a shield. According to the American Accountability Foundation (AAF), AOC’s attendance may have been more than just irksome in its hypocrisy, it violated a couple standards of what is an acceptable gift given to a U.S. representative.

Despite AOC’s insistence that her attendance to the gala was part of her “official duties”, AAF appealed to House of Representatives rules which say that receipt of such a gift “must fall under one of two exceptions:” the event must be “widely attended” or be a “charity event.”

The Met Gala is not widely attended, obviously, its guest list includes only the wealthiest and most influential celebrities and is personally and “carefully presided over by Vogue editor Anna Wintour.” Considering Wintour won’t even do Vogue spreads on glamorous Melania Trump as first lady, we know how picky she is.  So as far as “widely attended event” that’s a no on that exception.

Though technically the gala -- put on by for-profit media corporation Conde-Nast, the people who own Vogue Magazine -- is a charity event for the Metropolitan Museum of Art’s Costume Institute. So maybe AOC’s attendance falls under that exception in the Congressional Ethics Office rules for gifts.

Still the AAF claimed AOC’s attendance meets neither exemption. We’ll have to wait and see if their argument holds up.

And even if it ends up being technically true that AOC was welcome to attend,  it doesn’t change the fact that AOC looks like a total hypocrite.