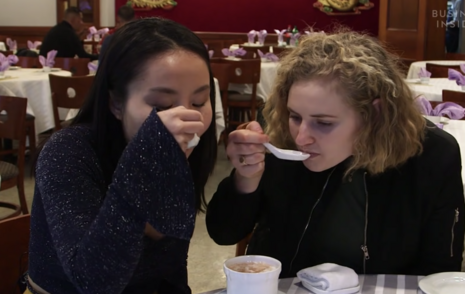 Hear ye, Hear ye! A new promulgation from the Fathers of the Church of Progress has just been handed down via their all-hallowed tome, The Washington Post. According to their latest edict, all foreign foods are to never again be referred to as “exotic” from this moment forward.

So speaketh the high priests of Holy Wokeness.

In all seriousness though, this is actually the latest referendum on our backwards, nationalistic and brutal culture of yester-minute. The Bezos-owned rag is now telling us it’s not politically correct to refer to food as “exotic,” as it promotes “xenophobia and racism.”

We wouldn’t want to be exclusive now, would we? Though this is to be expected. We all got the memo recently that we are global citizens, right? That all 7 billion people on earth belong to each country, and each country belongs to each of them? In short, you'd better acknowledge that grubworm cuisine from sub-Saharan Africa is as commonplace as a cheeseburger, you bigot!

Washington Post “Food Section” staff writer G. Daniela Garza complained about the anachronistic use of “exotic” to describe uncommon foods in our society with her article from July 7, in which she mentioned two main reasons as to why it’s impractical and insensitive.

“The first problem with the word is that, probably within the past two decades, it has lost its essential meaning,” Garza wrote, citing "experts" who claim the word made more sense in olden times. For example, NYU food studies professor Krishnendu Ray told her via email, “The word came into use during a time period in world history when the migration and movement of people and things was limited.”

Oh, so because we are so connected in the global community these days, then it makes no sense to refer to a lychee nut as an exotic fruit, right? Even though a midwestern American may have seen one perhaps once in his life? Are we not allowed to have a word to describe food from 4,000 miles away? When I go into H-Mart and the feeling of “I’ve never seen this before in my life” washes over me, should I castrate myself for attaching the idea of “exotic” to that feeling?

According to these people, probably. It seems my ability to distinguish foods based on my familiarity with them is rooted in whiteness.

Well, yes. And Garza then gave her second reason as to why.

“The second, more crucial problem is that its use, particularly as applied to food, indirectly lengthens the metaphysical distance between one group of humans and another, and, in so doing, reinforces xenophobia and racism,” she claims.

Oh yes, what a surprise!

The author then cited Serena J. Rivera, an assistant professor of Portuguese and Spanish at the University of Pittsburgh, who claimed that the use of the word “exotic” is “completely tied to the history of colonialism and slavery.”

“If you are exotic, if you’re automatically an ‘other,’ you’re not one of us,” she purported.

And, of course, Garza adds that in the historical context of “European explorers who traveled the world in pursuit of wealth, spices, coffee, tea, chocolate and places they would colonize or people they would enslave.”

And you know what? That very patriarchal, enslaving group of white men also originated and developed THE SAME English language that The Washington Post uses for their condescending holy writ.