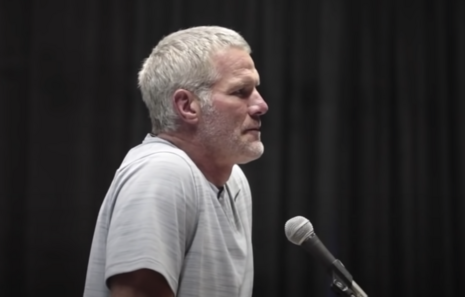 On the latest episode of his podcast “Bolling with Favre” (which he shares with former Fox News host Eric Bolling) the former Green Bay Packers and Minnesota Vikings quarterback said that trans women – biological men – competing in women’s sports is “unfair.”

“It’s a man competing as a woman,” Favre stated, clearly not giving any credence to LGBTQ propaganda that claims there’s no difference between a man post-sex change and a biological woman.

Of course, Favre was referring to the case of trans athlete Laurel Hubbard, a biological man who made it onto the New Zealand Women’s Weightlifting Olympic team after going through a sex change. FoxNews.com reported, “Hubbard, 43, has met all the International Olympic Committee’s requirements and has been competing since she transitioned when she was 35.”

Hubbard has competed and won as a trans woman in various women’s weightlifting competitions in the past. “She won a silver medal at the 2017 World Championships and gold in the 2019 Pacific Games,” the outlet added.

Again, this is obvious insanity. Here you have a man looking to beat women in an official weightlifting competition. It’d be comical as hell, if it weren’t so tragic and deluded. And Favre wasn’t ignorant to the insanity. “That's unfair,” he stated, adding, “It's not fair for a man, even if this person wants to be a woman or feels compelled — if you want to become the opposite sex, that's fine. I got no problem with it. But you can't compete against — males cannot compete against females."

The former pro-football star also sympathized with the poor female Olympians who may have to deal with losing to a biological man in a weightlifting competition. He said, “If I was a true female — I can't believe I'm saying that — and I was competing in weightlifting and lost to this person, I would be beside myself.” Yeah, it would be unbelievable to be in that woman’s shoes. To witness your competitive dreams dashed by a man in a female Olympic uniform would be a hellish farce.

Favre also went after another trans athlete who has been the topic of recent headlines, tearing into American BMX Freestyle Rider Chelsea Wolfe, a trans woman who has qualified to be an alternate on the U.S. Olympic team for this summer’s games in Tokyo. Wolfe garnered notoriety in recent days after her anti-American Facebook posts from a year ago resurfaced. Wolfe was apparently angered at Trump LGBTQ policy, and in the posts wrote, “My goal is to win the Olympics so I can burn a US flag on the podium.” Wait, we’re confused. Is she riding for America or ISIS?

Either way, Favre blasted Wolfe, saying that if it were up to him, "she" would be pulled from the team. “I wouldn't have her participate in my Olympics; go participate for somebody else.” he said, adding, “To say that is such a slap in our country's face. I can't believe this person can be allowed to participate for our country.” Sounds like we need to make the American Olympic team great again.