Far left outlet Daily Beast is leading the way in the media’s anti-Christian bias, now targeting new members of congress for trying to spread the good news of their Christian faith. 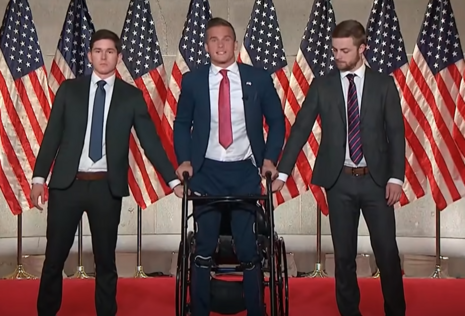 Madison Cawthorn, the youngest member elected to the U.S. House of Representatives in history, was raked over the coals by The Daily Beast for his Christian faith this week, because that seems to be a legitimate grievance in the eyes of the left these days.

It’s more anti-Christian bigotry from the left and, considering America is still roughly 70 percent Christian, it’s somehow one of the few acceptable prejudices.

The outlet mounted an attack against Cawthorn’s desire to spread the Good News of Jesus Christ with people of other faiths during his younger years. Of course, it’s one of Christ’s New Testament mandates that His followers spread the truth to all corners of the globe. But for the nuts at The Daily Beast, this might as well be another odious manifestation of white Christian colonialists messing with the beautiful and equally sophisticated customs of other tribes.

In the piece titled, “Newly Elected GOP Congressman Madison Cawthorn Has Tried to Convert Jews to Christianity,” Beast contributor Pilar Melendez went after the North Carolina Republican for an interview during which he said he feels obligated to convert his Jewish and Muslim friends. Oh, THE HORROR!

At the outset of the hit piece Melendez wrote, “In an interview with Jewish Insider, the 25-year-old, who came under fire for selfies he took at Hitler’s vacation retreat in Germany, claimed he had converted ‘several Muslims to Christ’ and several ‘culturally Jewish people.’” Is this supposed to be scandalous?

Like we said, it’s a Christian thing to tell other people about their religion. Well it’s actually pretty characteristic of any religious person ever. How else are more followers propagated? Then again, the left hates Christianity, so its spread of abhorrent to them, especially when it undermines religious beliefs that are aggressively anti-Christian, like Islam.

Also it flies in the face of the left’s mantra that all beliefs, no matter how contradictory, are perfectly equal.

Ironically, readers of The Daily Beast probably think it’s a sin that Cawthorn doesn’t have one of those pathetic “Co-Exist” stickers on his pick-up truck.

Of course, the piece appeared to mock Cawthorn’s claim that he has read “just about every single religious work there is” and even went after the poor, paralyzed-from-the-waist-down U.S. representative for his story on converting someone down in Atlanta when he was undergoing physical therapy for the life-altering injuries he sustained in a car accident. Ten years ago, everyone would have called him brave, and a hero for sharing his gifts amidst all that, but today they consider him a smug, entitled colonizer.