Supreme Court Justice Neil Gorsuch drove social media lefties into a frenzy on Tuesday all because of a little innocuous Season's Greetings on the Fox News Channel. The Trump nominated Supreme Court Justice wished the cable news network a “Merry Christmas” and inclusivity-obsessed progressives flipped their collective wig, accusing the statement of being a "talking point of the GOP.” 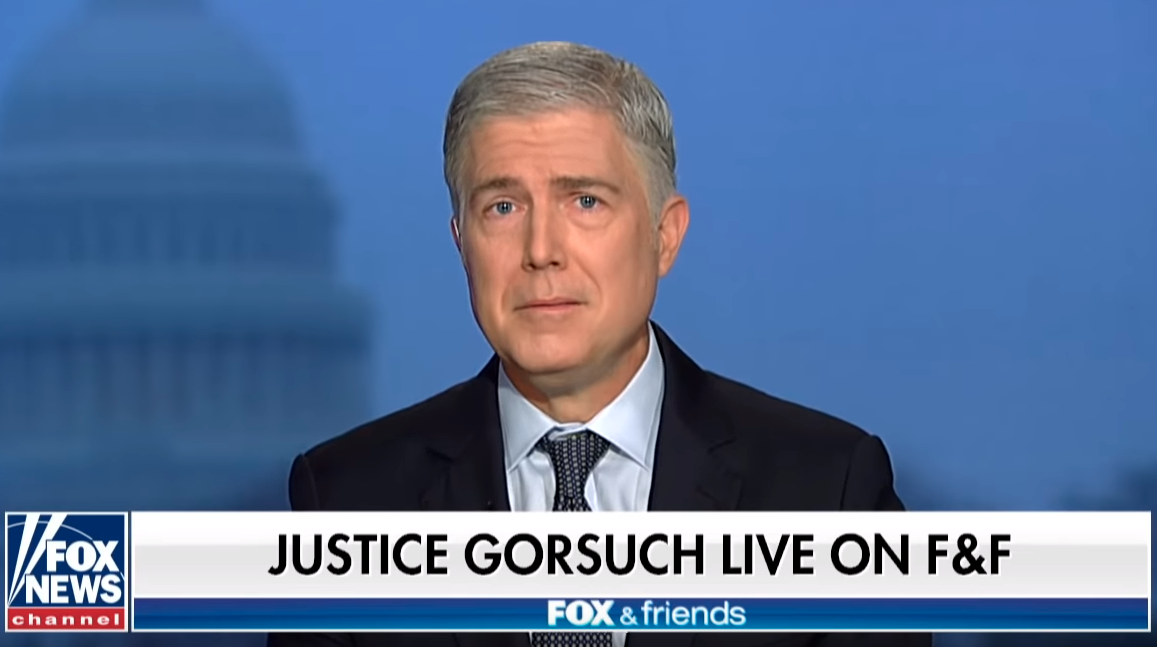 Imagine believing that “Christmas” is only a right-wing thing? These people are insane.

Gorsuch, the second most-recent Supreme Court pick and a conservative judge, appeared on Tuesday morning’s episode of Fox & Friends to talk about his recent book A Republic, If You Can Keep It, though he only made it fifteen seconds into his interview before triggering a few Twitter lefties.

Host Ainsley Earhardt introduced the Justice, saying, “A rare live interview. Supreme Court Justice Neil Gorsuch. Good Morning to you.” Gorsuch responded with an earnest “Merry Christmas!” to which Earhardt replied, “I love that you say that!”

And that's all it took.

Playboy writer and BBC commentator Amee Vanderpool began the kvetching. Her partisan ire for the conservative SCOTUS Justice prompted her to compose one of the most senseless tweets of all time: “Supreme Court Justice Neil Gorsuch just appeared on Fox and Friends this morning, making a point to parrot the ‘Merry Christmas’ talking point of the GOP.” Really? The most widely-celebrated holiday for 2000 years is really just a GOP talking point? Talk about an embarrassing take.

Vanderpool added, “If he's willing to go on Fox and throw a shout out to Republican narratives, what else is he willing to do?” What’s that supposed to insinuate? He celebrates Christmas so that means he’ll sanction death camps? Utterly ridiculous.

A stand up comedian harboring apparent contempt for Gorsuch, Trump, and Christmas, Sean Kent was triggered by the innocuous greeted. He tweeted, “On Fox News, Neil Gorsuch made a point to say ‘Merry Christmas’ like he just gained the freedom to say it under Trump. This guy is such a worst case scenario of a stolen Supreme Court seat.” Or he’s just celebrating Christmas, dude. So unhinged and we’re not even going to mention “stolen Supreme Court seat.”

Senior writer for progressive outlet The American Independent, Oliver Willis tweeted, “Fox News anchor hails Supreme Court Justice Neil Gorsuch for greeting her with 'Merry Christmas' to start their interview. Fox News has for years lied to viewers and claimed there is a ‘war’ on Christmas.” Oh, because these tweets show nothing but love for the holiday? Give us a break.

And, finally, we were privy to the lofty thoughts of Twitter lefty Tony Posnanski, who was just generally annoyed by Gorsuch’s existence in general. Following the Justice’s F&F visit, Posnanski tweeted, “Neil Gorsuch can eat shit. He is a partisan hack who stole a Supreme Court seat. Fuck him and his shit book.”

Merry Christmas, you lefty clowns! Our thoughts and prayers are with you during this season of Jesus' birth!