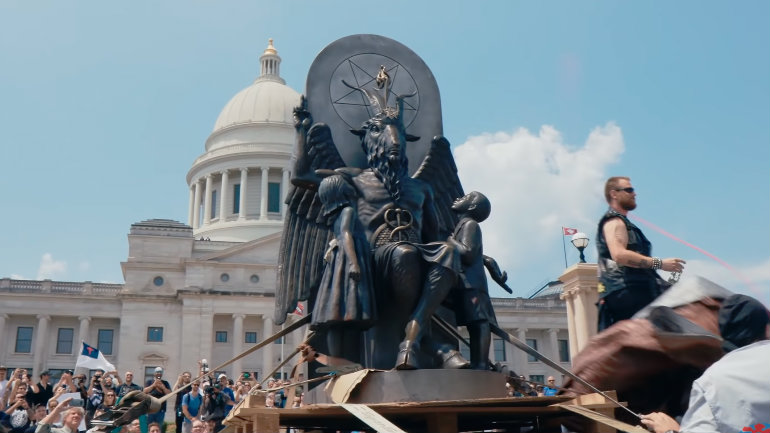 Hail Satan?, the indie documentary Deadline.com called “devilishly compelling,” and which Rolling Stone described as a “funny, nuanced, and sympathetic look at the people behind The Satanic Temple,” slated both its L.A. ArcLight and Landmark Theater premieres for Friday, April 19, which falls on this year’s day of remembrance for the crucifixion of Jesus Christ.

Deadline reported the story, claiming the premiere is happening “not so coincidentally” on Good Friday. The Satanic Temple, as NPR writes, is all for “a poke in the eye of religious conservatism.”

Directed by self-described “all around lunatic” Penny Lane, Hail Satan? gives audiences “access to this enigmatic movement, which has grown to more than 100,000 members around the world in just five years.” The Satanic Temple, as Lane and its leader Lucien Greaves want viewers to know, is not all about devil worship and dark esoteric rituals, but also about fighting “for equality,” and focusing “on community and its devilish sense of humor.”

According to the film’s true believers, America’s Judeo-Christian values have failed to secure goodness and peace in our times. Thus the Satanic Temple was wrought in order to promote peace and love throughout the new age. An excerpt from the film’s synopsis reads, “In an era when founding principles and institutions can’t be trusted to work on behalf of all people, these progressive satanic crusaders advocate to save the soul of a nation.” Sure.

Lane explained the group’s ideas to Deadline, stating that “Satan is more of a rebel figure.” The church is “not anti-Christian,” she insisted, but rather exists to subvert “the unquestioned supremacy” of Christianity. You know, the oppressive institution that promotes loving thy neighbor and laying down one’s life for another, even if he’s your enemy. Lane insisted that in this way the Satanic Church is “Post-religion.”

The Satanic Temple famously railed against an edifice of the Ten Commandments outside Little Rock, Arkansas capitol grounds in 2017, petitioning the local city council to erect a statue of Satan instead because they claimed it better asserted the principle of separation of church and state, rather than some tyrannical Mosaic mandate.

But don’t get too riled up. The goat-headed, winged statue was just a provocative troll tactic. Even though the Ten Commandments statue was destroyed less than 24 hours after erection by some (probably) possessed motorist, remember, Satan’s really just a misunderstood, funny guy. And what better way is there to honor peace, “equality” and “community” than by mocking the day Jesus died for all those things? Good prank, guys!