What’s the best way to look like a raging hypocrite? Well there are plenty of options. A good one might be to openly applaud vandalism against a celebrity’s Walk of Fame star, and then turn around and preach the lefty gospel of peace, love, tolerance. 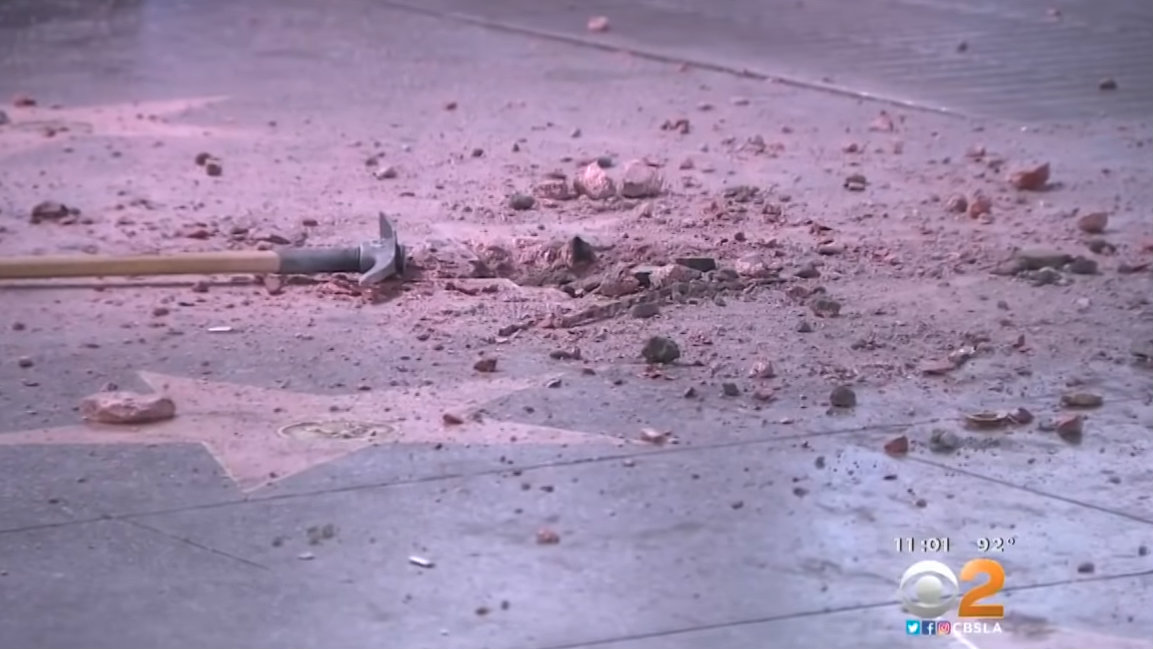 Several big celebrity names took to Twitter to express their glee over the fact that Donald Trump’s Hollywood star had been destroyed by some vengeful lefty freedom fighter.

Electronic artist Moby, while reminding everyone that he still existed, stated that he found pleasure in the destructive act. With a picture of the destroyed star, he tweeted: “This was @realdonaldtrump‘s star on Hollywood Blvd. and yes, petty vandalism is petty, but if we’re being honest it’s also deeply satisfying.”

Chelsea Handler also made a quick quip. She wrote: “Quick question: Is the man who vandalized Trump’s star on the Hollywood Walk of Fame single?”

Actress, singer, oh, and self-proclaimed “Darwinian Feminist,” Minnie Driver added to the mockery, throwing in her own little joke about the vandalism and Trump’s approval rating. She hyped: “Ah. The current state of #IMPOTUS’ star on Hollywood Blvd. I see his popularity has soared to sledgehammer.” Wow, someone should strongly advise Ms. Driver to add “comedian” to her Twitter bio as well.

Mia Farrow asked why Donald Trump even had a star on Hollywood Boulevard in the first place. She posted a picture of her journalist son, Ronan, standing over John Farrow’s star, and tweeted a self-congratulatory caption. It stated, “My parents were proud to be awarded their stars on the Hollywood walk of fame. They had worked hard and over their lifetimes made scores of fine films. But why does Donald Trump who was in one single cheesy TV show, even have a star?”

Of course, George Takei had to get in his two cents as he often does. The uber liberal, former Star Trek actor revealed his aptitude for children’s fantasy novel knowledge with a disparaging tweet. He wrote, “Overheard: ‘Someone smashed Trump’s star on the Hollywood walk of fame. Now he’s down to six horcruxes.” So Twitterdom. What are the other six? Write and vote up your favorites in the replies. Ready? Go.”

Thank you for that hip reference Mr. Takei. No need to worry though, everyone knows you’re at least young at heart.

Josh Gad, everyone’s favorite Disney musical sidekick, expressed a bit of biting sarcasm towards the star’s defacement. He tweeted Ryan Parker’s picture of the rubble and quipped, “Hmmm. What a bummer.”

Ah, glad tidings from a bunch of people who would never let Donald Trump count himself as one among their throng. Something tells me the man is more than okay without the Hollywood association anyways. It just breeds anger, resentment, and bouts of crying; all the major symptoms of lefty derangement syndrome.