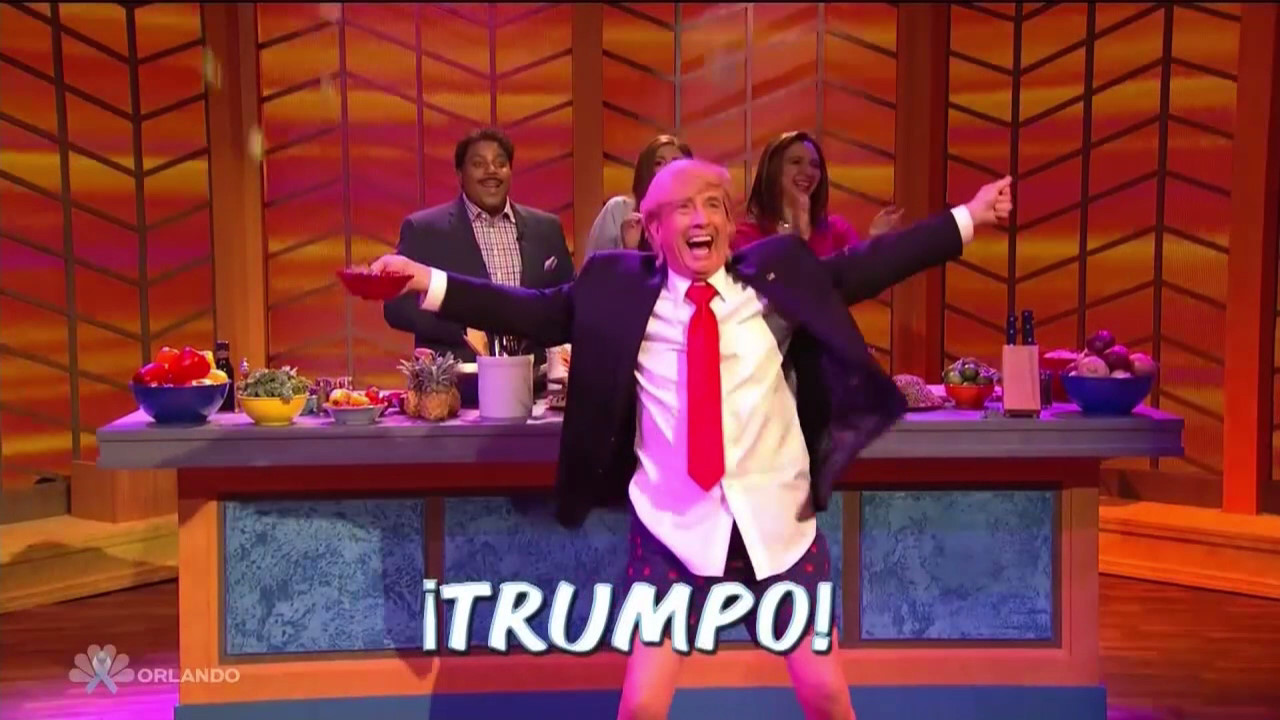 After opening the series by mocking Donald Trump’s wife, NBC’s Maya and Marty decided to turn the lens on the presumptive Republican nominee himself in last night’s politically charged episode. When a stereotypical Hispanic morning show’s guest chef begins to the extol the virtues of fiber for scrubbing the intestinal wall, she is immediately drowned out by blaring music as Donald Trump, sans pants, bursts from stage left and begins tossing her ingredients around the studio.

Chef: So, I have several vegan dishes from my cookbook "The garden of youth." And the first one is a wonderful chickpea arugula salad.

Chef: It doesn't take long to make. You just start with 3 to 4 cups of organic greens. This dish, guys, has so much fiber. Which gently scrubs your intestinal wall.

Keenan: You said wall. It's trumpo.

Chef: Who, Who was that?

Maya: That was trumpo. He's so naughty.

Keenan: He make a mess of everything, yes?

Chef: Yeah, he sure did. A little weird. He comes on the show a lot?

Keenan: It is a political year, so we must address the politics too.

Maya: Yes, we must. Our audience expects it.

Keenan: This is a satire. But please continue with your cooking demonstration.

Chef: I, uh, well. I can't do the salad without the greens. Well, let's move on to the Thai peanut soba noodles with snap peas. This is actually my most requested recipe on Twitter.

Chef: Yeah. I suppose. But I can't really show you these recipes if he's going to throw everything around like a maniac.

Did the writers script Keenan’s pronouncement that “this is satire?” If so, they should have known that if you’re preemptively defending a comedy sketch as “satire,” you might want to consider a rewrite. I can only imagine the outrage mob that would be forming over Keenan and Maya’s over-the-top accents and broken English if the bit weren’t mocking Donald Trump.

To be fair, the Hillary Clinton was given the obligatory “Hillarito” treatment at the end of the segment when the guest foolishly mentions "e-mail," but unlike Donald Trump’s character, Hillary was fully clothed and the hosts joined her dancing instead of ridiculing her.