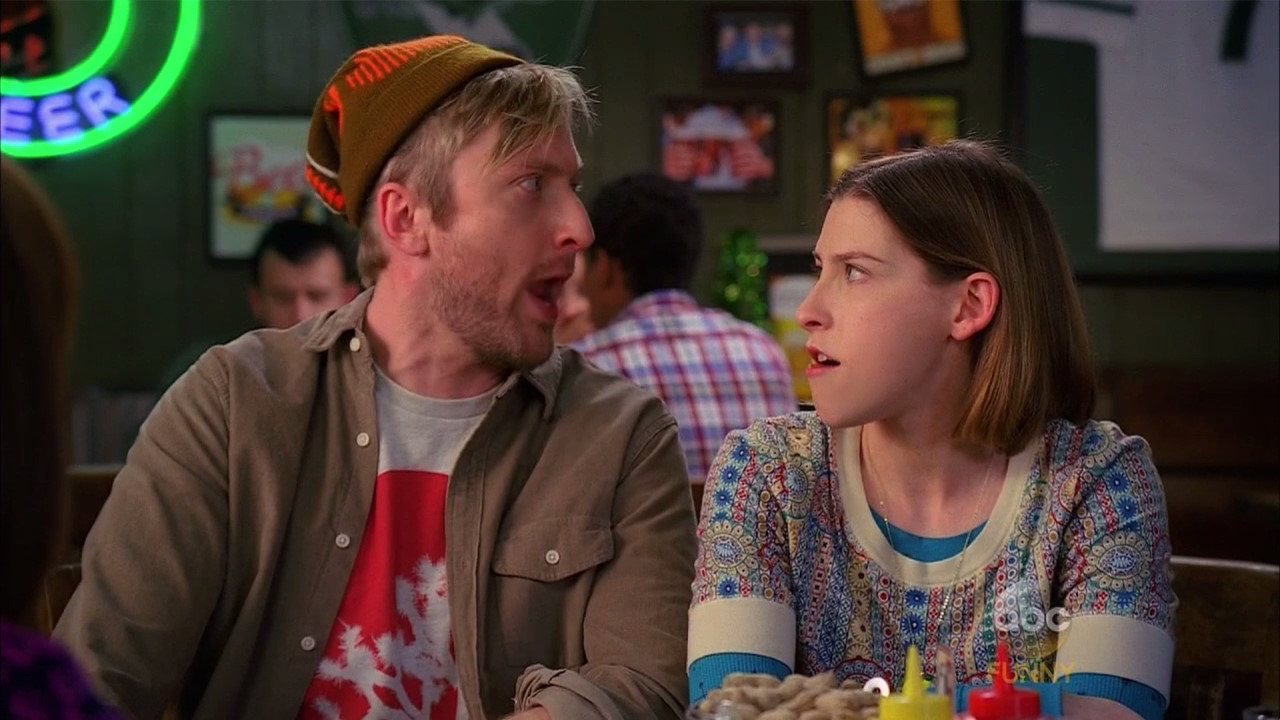 In the midst of a 2016 campaign in which students claimed to be “frightened” and “in pain” because they saw pro-Trump messages scrawled in chalk around campus, Indiana University was plunged into a panic at the presence of a Dominican Friar, a Dartmouth sorority canceled its annual Kentucky Derby party after protesters cried “racism,” and the University of Southern California student government attempted to impeach school senator Jacob Ellenhorn for inviting a conservative speaker to campus, last night’s episode of The Middle on ABC couldn’t be more timely.

In "Survey Says..." series mother, Frankie Heck (Patricia Heaton), just wants to get out of the house and have a relaxing afternoon with her daughter Sue (Eden Sher). To Frankie’s dismay, instead of a quiet lunch with her daughter, she’s immediately introduced to Jeremy (Will Green), “the man her daughter likes.” Jeremy doesn’t order anything, freeing him up to explain how everything from mozzarella sticks to Horton the elephant is somehow problematic.

Frankie: So, then, that's a no on the mozzarella sticks for the table?

Sue: Oh, no, no, no. Jeremy only eats raw food. He's not getting anything. He's just here for the company.

Frankie: Oh, well. More for me. So, Jeremy, where are you from?

Jeremy: I don't like to say I'm from a particular place. I'm against all kinds of tribes. I think we should all just be citizens of the Earth.

Sue: And he's not just saying that because he's from Iowa. He really means it. Jeremy only says what he means, and he only means what he says. He is like Horton the Elephant but with broody eyes.

Jeremy: Don't get me started on that book.

Sue: Ugh. Ooh! Tell her what you were saying about Plastic Island. There is this island in the middle of the ocean the size of Texas that is filled with all of the plastic items that we throw out -- plastic bags, plastic containers, plastic bottles.

Frankie: Plastic Island sounds great. You never have to wash anything. Am I right?

Jeremy: It's not a joke.

Jeremy: If she's smart, she's at the ACLU, fighting for a decent living wage.

Frankie: So, Jeremy, what does your dad do?

After peeling her away from Jeremy, Frankie hopes she can salvage some quality time with her daughter with a trip to the movies. Unfortunately, everything Frankie says merely ramps up the righteous indignation that has infected her daughter. Everything is problematic, and nobody gets it but Sue!

Sue: So, we're all gonna protest outside the science building. It's just not fair to inject rats with the flu. Rats have it hard enough. And putting makeup on rabbits? Not okay. I mean, it was kind of funny when Bugs Bunny did it to look like a lady rabbit, but now that just seems like they were mocking transgender bunnies. Mom, are you even listening to me?

Frankie: Yeah, yeah. Hey, how about we catch a movie or something?

Sue: Pbht! Why? So we can see how few black people there are in films?

Frankie: Okay, we'll put a pin in that. Oh, ooh! You're gonna love this. I found this yesterday. Actually, I stepped on it.

Sue: Ugh, the shoe of unrealistic expectations. If you took that Barbie's measurements and put them on a real woman, she would fall over. She literally wouldn't be able to stand up straight. Did you just roll your eyes at me?

Sue: You did it again.

Frankie: Look, you seem to think you're the only one who cares about anything.

Sue: Ugh. Mom, you just don't get it. Your idea of caring about something is burning your bra.

Frankie: How old do you think I am? That was Grandma's generation. And she didn't burn her bra. She just switched to light support for a while. Look, I used to be your age. I understand righteous indignation, but eventually you get to be my age, and you realize you can't fix everything. And sometimes you just got to kick back, relax, and enjoy a movie with too many white people in it.

Sue: I am outraged that you think my outrage is just a phase.

Frankie: Okay, you know what? I am done. I have put up with this all afternoon, and I want my Sue back -- happy Sue, sweet Sue.

Sue: Well, sweet Sue can't save the arctic foxes, but angry Sue can, and they are first on mine and Jeremy's list, partly because that's where they come alphabetically but also because they need us.

Frankie: You know, you don't have to think things just 'cause your new boyfriend does.

Frankie: Oh, please. Look, I know it's exciting to care about things when you're young, but trust me, one day, you're gonna be me. Yeah, I'm your Ghost of Christmas Future. Or do you hate Christmas now, too?

Sue: Oh, I love Christmas, but I hate the merchandising of it.

Sue: And I will never be like you. Jeremy and I are gonna change the world.

Frankie: If Jeremy wants to change the world, he should start by being less of a douche.

Sue: Oh, you just want me to be with some boring, un-deep Ken doll. Well, guess what. I will not be Barbie, barefoot and pregnant in her Malibu prison.

Frankie: It wasn't a prison. It was a dream house. It's in the name. And the only reason she was barefoot is 'cause you couldn't keep her damn shoes on.

It would be funnier if it weren’t such a painfully accurate depiction of the culture of outrage that has consumed American universities like the plague.