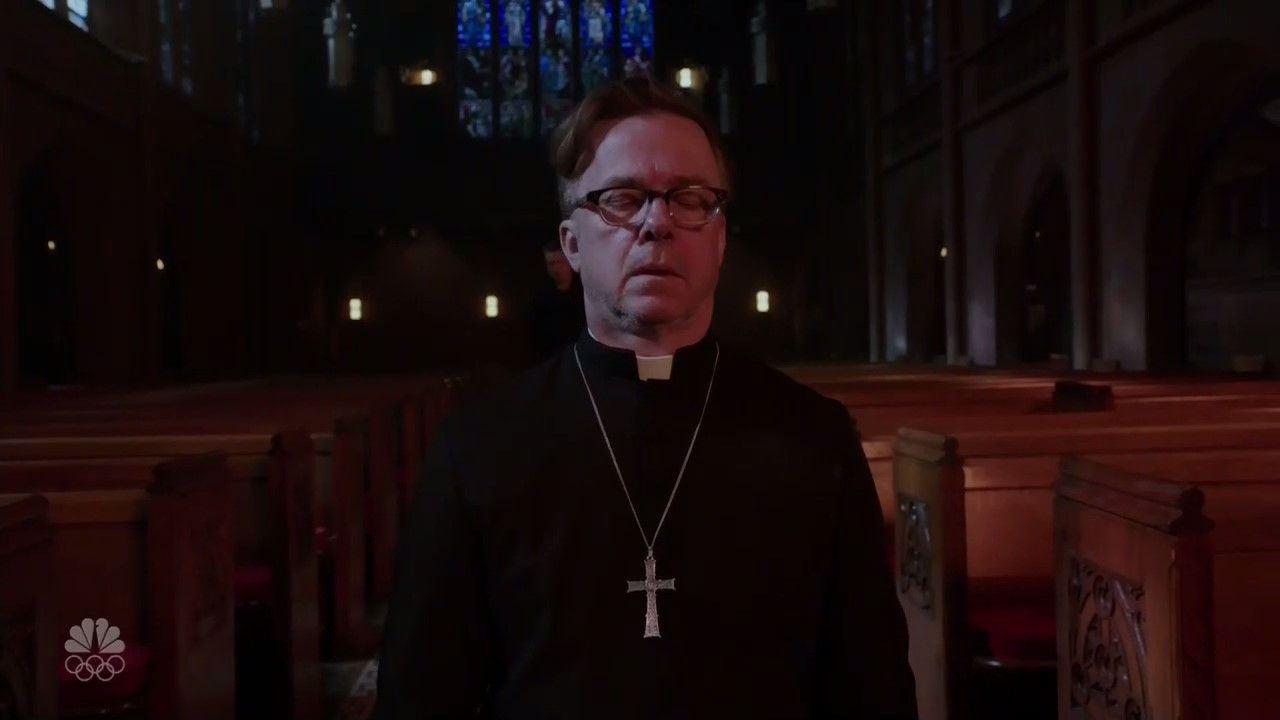 Holy Week is a time for reflection, prayer, and bashing the Roman Catholic Church on network television, apparently. The previous episode of Law and Order: Special Victims Unit, "Manhattan Transfer," ended with the sex crimes unit bagging two undercover vice cops, a nun, and numerous public and church officials in an underage sex trafficking sting, but the episode left audiences with more questions than answers. Here’s a recap:

Tucker: So you bust a sex party and find a nun.

Nina: You saw who was there. Politicians, police.

Barba: The Johns, they must know who threw the party.

Olivia: They're not saying. Somebody knows how these girls got caught up.

Tucker: Is there someone at the school we should be looking at?

Barba: He has made some very serious allegations against Tucker.

Tucker: They really set me up good. [Cell phone buzzes]

Olivia: 1pp wants to see me.

After a three-week hiatus, those questions were finally answered. Last night’s episode, “Unholiest Alliance,” left no doubt that the church is an irredeemably corrupt institution that protects its clergy above all else. Under the direction of its leadership, the fictional church facilitated a massive cover up of child sex trafficking, murder, and blackmail, and very nearly got away with it. Those few Catholic priests and nuns not in on the conspiracy are, with few exceptions, portrayed as too gullible and stupid to understand they’re being played.

In between jabs at the faith, “Unholiest Alliance,” depicts a police department that—outside of the Special Victims Unit—is too cowardly to stand up to its bosses and just wants to sweep the abuse under the rug and move on.

Catalano: Words cannot express my sorrow for the abuse our precious children of God have suffered.

William Dodds: You're lucky. As of now, you're not bloodied up. Quit while you're ahead.

Mike Dodds: What, you mean stand down? The monsignor's the one who was running this ring. He had his own priest put a hit out on Sister Nina.

William Dodds: The one from West Africa? They'll claim he was a rogue thug.

Mike Dodds: All right, what happens to the Vice detectives?

William Dodds: No judge, cop, or Ada's going to jail for seeing a hooker. They'll plead out. Now, Father Eugene, the Church will send him to some sanatorium on the Isle of Skye to work on his anxiety issues.

William Dodds: He went to see his cousin, by himself, and told him the name of the girl who was cooperating. She'd be alive if he weren't so stupid.

Mike Dodds: So he's under the bus now too? The hierarchy calls, everybody backs off, and it's all just taken care of.

William Dodds: Do you have any idea how much heat there was even before this? It's a career-killer. Walk away.

Fortunately for the audience, and the show’s fictional victims, Mike Dodds (Andy Karl) does not take his father’s advice. Catholic detective Dominick Carisi (Peter Scanavino) makes one final appeal to Father Eugene (Michael O'Keefe), the Catholic school's guidance counselor who was blackmailed by his superiors into identifying vulnerable girls. Father Eugene breaks down, and reveals the location where evidence of the conspiracy has been buried.

Only once the evidence is recovered is the true extent of the crimes committed by the clergy revealed: two decades of abuse conducted not for profit, but purely for the humiliation and torture of innocent girls.

Dodds: Girls in compromising positions with priests, cops, and Johns.

Barba: Photos of the Johns are good for blackmail, but why take pictures of themselves?

Rollins: They get off on it.

Carisi I found Eugene's psychological profiles of the girls they trafficked, a few other counselors' too. It's like a tip sheet for predators.

Barba: How much are they making?

Barba: Then what's the point?

Rollins: They want to humiliate the girls, control them, force them to service their powerful friends, who, in turn, owe the church.

Barba: Why keep all this?

Carisi: 'Cause they're Catholics. They don't get rid of anything, they just bury it.

It’s telling that Law and Order: SVU’s writers not only chose to—once again—attack the Church, but NBC’s producers chose to time the release of this anti-Catholic episode with one of the most holy weeks in the Christian liturgical calendar.

Even more striking is the episode’s eerie similarity to a real tragedy, scandal, and massive cover up. Law and Order is known for “ripping stories from the headlines,” and the events of the past two episodes have a real-life parallel: the Rotherham Sex Scandal, in which the rampant sexual abuse and trafficking of children by Islamic gangs was ignored and swept under the rug because government officials were terrified of being labeled “racist” if they took action. More than 1,400 children are believed to have been abused in the scandal. When an investigation finally began, the British Muslim Youth organization encouraged Muslims to boycott the police.

But Rotherham is an inconvenient storyline for SVU’s writers. Islam is not an approved subject of criticism. It’s far safer to condemn the Catholic Church, even if it is Easter.