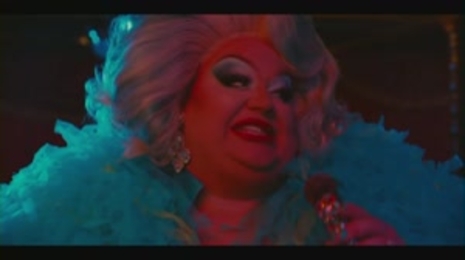 The show's overt LGBTQUIA+ content originally premiered only on Hulu, but this year Disney decided to premier the entire series on both Hulu and the more child-oriented Disney+ streaming service.

“We’re excited to be on Disney+. It expands our audience in a really exciting way. Disney+ is a huge platform,” Love, Victor's head writer and Executive Producer Brian Tanen told Indiewire.

Disney should just rename Pride Month "Groomer Appreciation Month," because the third and final season of Love, Victor again promotes inappropriate interactions between minors and adults. It also insults the beliefs of major world religions and even makes a joke in one episode of risky homosexual promiscuity involving teen boys.

"Lucas and Diego" are fake names the boys use on their gay dating apps. Both boys initially think they are meeting an anonymous male they texted through the app, not knowing it's really their ex. Victor lied about his age on the app, saying he was twenty-two. Having the teens on the show lie about their ages on homosexual dating sites is glossed over as no big deal.

Victor: Okay, Lucas. What did you major in?

Victor: Oh. My ex-boyfriend was a musician.

Victor: Uh, did you have anyone special like that?

Benji: Nah. I only dated duds.

Drag Queen: Oh! Damn! (siren, applause) (cheering) Get your pretty young tush on up here! I got a prize for you. (laughs) Oh...You look even better up close. You look like one of those teenage movie vampires. All pale and hоrny. (giggles, cheering) Here's your prize.

Tanen, the show's producer, is clearly aware that he's dealing with with characters who are still kids, but that fact only encourages him.

"But at the end of the day, as you’re saying: Yes, they are still kids," he told Indiewire. "And we kept coming back to that idea that they have stuff to learn. They have to move through difficult situations to learn how to grow and grow up."

Prior to this episode, Victor had quickie sexual encounters with a promiscuous boy named Nick (Nico Greetham), who he met through his parents' new "open" church. (In season two, Victor's mother yelled at a Catholic priest for not embracing her son's active homosexuality.) The two boys routinely meet in various semi-public locations and Victor even brags to a friend that "Nick and I hooked up in his little sister's playhouse while his whole family was home."

After worrying he got a sexually-transmitted disease from Nick, Victor is relieved to find out it's just poison ivy on his penis from getting naked outside under a neighbor's porch.  "Put some cream on the ween and get back out there" his straight friend Felix (Anthony Turpel) tells him. Felix's former girlfriend from previous seasons is now dating another female.

While last season attacked the Catholic faith, this season sets its sights on Islam. In the episode "It's You," the mother of Victor's gay Muslim friend Rahim (Anthony Keyvan) encourages him when he uses his Muslim prayer beads (tasbih) to pray for a boyfriend.

Mother: Morning. I saw your tasbih on your dresser. Was somebody praying last night?

Rahim: Yes, Maman. But...I don't think it worked. Pretty sure you're not supposed to pray for a boy to show up. Isn't that, like, a big Muslim no-no?

Mother: When I was pregnant, I prayed every day for a boy to show up, and God delivered the greatest gift of my life. Your brother Nasser. Okay, Rahim. I know it may not feel this way right now, but I believe God has a plan for you. And that plan includes someone who will love you with all his heart. So, it is written.

A script in which a Muslim male teen uses prayer beads, shown earlier on his desk, to ask God for a boyfriend was definitely not on my Disney bingo card.

Tanen says he wanted Love, Victor to explore the experiences of a "queer person of color," but whether it's Rahim's Iranian Muslim family or Victor's Latino Catholic family, the writers seem determined to merely stamp their own LGBTQUIA agenda onto different cultural backgrounds, not really explore those backgrounds with any honesty. Any character who doesn't rush to celebrate homosexuality is merely dismissed as a homophobe.

All things considered, this series should not be encouraged for "family-friendly" audiences. Its boyish-looking star and happy, light-hearted opening music give it the appearance of an innocent tween show. But with its troubling content and tendency to wink at boundaries between adults and minors, it is anything but harmless.