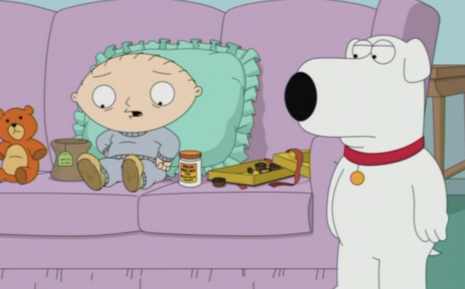 Family Guy creator Seth MacFarlane is reliably leftist, but one issue where his show resists the woke narrative is on trans insanity. On Sunday, Family Guy did it again, premiering a new episode making fun of current transgender madness.

In the episode, 'First Blood,' Stewie (Seth MacFarlane) injures himself on a slippery slide during a barbecue, but thinks blood in his underwear is because he is having his period for the first time. Brian (Seth MacFarlane) refuses to go along with Stewie's delusion.

Stewie: I'm having my period. It's like 'The Shining' elevator down there. My 21st Century Box has been conquered by Eric the Very Red.

Brian: Yeah, this is getting dangerously close to a 'Will & Grace' now. But if you're bleeding down there, it's clearly because you hurt yourself on the Slippery Slide.

Stewie: Oh, yeah? If I'm not having my period, then why am I drinking herbal tea from a large earthenware mug with no handle on it?

Stewie: Brian, it's 2022-- there's no such thing as a boy anymore. Or a girl. Just a vast sea of chubby "Theys" and "Thems," so coddled by their sanctimonious woke parents who think activism is virtue-signaling on Instagram. If Martin Luther King could come back, and see what they were doing in his name, he'd never stop throwing up. (Slurping)

Brian: Maybe...Maybe you are having your period.

When the wound heals later in the episode and the blood stops, Stewie think he is pregnant. He gives up the delusion, however, after a nurse gets angry at him for asking for an ultrasound.

“Oh, I-I had no idea,” the bartender apologetically answers, “Do whatever you want all the time.”

This week's 'First Blood' was another hilarious episode which poked fun at a lie that needs to be mocked more often.