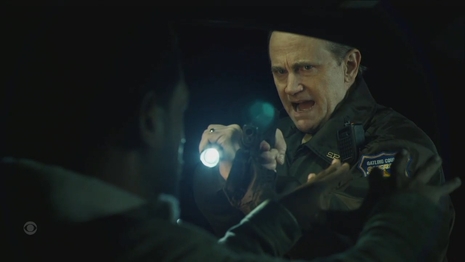 For much of the 2020-21 television season, network dramas bombarded the public with endless Black Lives Matter (BLM) and "anti-racist" propaganda. A notable exception had been CBS' The Equalizer which stuck with old-fashioned storytelling and kept the lecturing to a minimum. But this season, the show is determined to make up for lost time by pummeling its audience with endless left-wing messaging.

In the episode 'D.W.B.' on Sunday, the show relied on the tired BLM myths about out-of-control racist cops targeting innocent black men.

The episode began with two officers in a rural county getting a message from the dispatcher about an armed robbery by a black suspect driving an SUV. It just happens to be that this night Marcus Dante (Torey Kittles), a black detective from New York City and personal friend of Equalizer Robyn McCall (Queen Latifah), is passing through and gassing up his SUV.

The two local deputies, Barnes (Lee Tergesen) and Morales (Brandon Espinoza), assume Dante, a black man casually stopped at a well-lit gas station in town, must be the suspect who fled. They taze Dante and beat him up.

Barnes: You! In the SUV! Put your hands outside the window! Now! All right, here we go. What are you doing out here? Where are you coming from?

Dante: Hey. Whoever you're looking for, I'm not him.

Dante: Whoa. You will not search my trunk. Not without a warrant.

Barnes: Out of the car. Now.

Dante: Tell me. Why am I being detained? Let me guess. You saw a black man who fit a description. That it? Don't bother to find out who I might be? I want both your names, badge numbers and name of your immediate supervisor.

Barnes: I said shut it! Check his car.

Dante: Do not enter my vehicle. I am an NYPD...

Morales: What the hell?!

After Barnes and Morales realize Dante is actually a cop, they fear reprisal so they kidnap Dante and make plans to kill him. Yes, the episode is completely over-the-top. It turns out that Deputy Barnes had a previous case 27 years earlier of beating and kidnapping another innocent black man.

Robyn McCall finds the elderly black man that Barnes once held hostage. He tells her that the world was not, in his words, "woke" then. (Apparently, the writers want you to believe cops were kidnapping black men in the 1990s en masse and that the word "woke" means progress.)

The local sheriff is also depicted as a racist who refuses to help McCall in her hunt for Dante's kidnappers. But when the sheriff finds out that Barnes and Morales drove by the gas station where Dante disappeared, he does confront them.

Barnes makes up a story for the sheriff and cites fear of Don Lemon and Al Sharpton as reasons to keep quiet about his concerns.

Barnes: Here's what happened. We saw the guy. We spoke to him. He identified himself as a cop; we went on our way.

Sheriff: Don't BS me. Why didn't you call it in?

Barnes: We didn't have time. We were moving so fast trying to catch that assault suspect who attacked Charlie. Look, if we went public with that, in today's climate, and that guy went missing, we're instantly guilty. You want those Black Lives Matter people protesting here in Gatling? Al Sharpton and Don Lemon camped out on your front lawn?

The sheriff lets the matter go, but McCall is ultimately able to find and help save Dante. The episode ends with Dante handing in his NYPD badge because he believes he can no longer be a cop in good conscience.

The Equalizer became a hit following its debut after the 2021 Super Bowl, but with recent episodes like these one wonders how much longer such a new series can maintain its success.