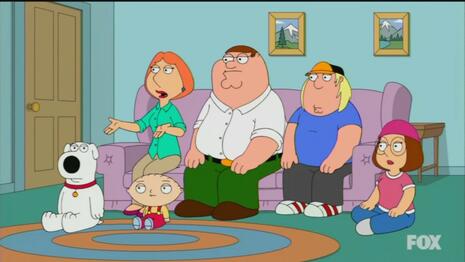 In the episode, Brian gets a job as a "journalist" for a "pop culture site."  Brian's interview does touch some third rails the left usually avoids.

"You're really good at sexualizing children," the interviewer tells him, after Brian mentions he has created names like "Abigail Breastlin".

"I-is that a problem?" Brian asks.

"No, no, no. That's a big part of online journalism," he answers.

While researching an article for his new job, Brian accidentally discovers that Quahog's local hero and brewery founder, 'Pawtucket Pat,' stole his beer recipe from Native Americans and then killed them. This leads to a controversy about the town's statue of Pat.

Brian wants the statue removed, but Peter wants it to stay, while Lois briefly offers a rational argument.

Brian: Peter, we can't leave a symbol like that in the town square. Pawtucket Pat was a horrible racist.

Peter: Well, so is Tucker Carlson, but we still say hi to him at the company picnic.

Lois: Brian, if you apply the values of today to people who lived almost 300 year ago, uh, doesn't that mean we'd have to take down the statues of pretty much everyone? I-I mean, where do you draw the line?

Family Guy creator Seth MacFarlane clashed with Carlson and criticized Fox News when he was with the company. After spending most of his career with Fox, MacFarlane signed a deal with NBCUniversal earlier this year. Family Guy, of course, continues to air on Fox which is under Fox Corp. with the Fox News Channel.

Peter buys red MAGA-like hats for his friends with the letters "KUTS" (Keep Up the Statue) and Kid Rock shows up for a rally. "Whenever there's a town debate with racial overtones, I'm there on the wrong side," Rock says.

Stewie suggests to Brian that he tear down the statue himself. "You know what? That's a great idea. Like not separating immigrant children from their families," Brian answers.

After the townspeople discover the statue was torn down in the middle of the night, they angrily gather at its empty bust. The only people in the crowd are mad white men. A store across the street is selling tiki torches. Fox News shows up with a Dukes of Hazzard car.

Eventually, native American tribesmen show up and Lois convinces the crowd of white men to apologize.

Lois: No, no, you know what? No. Quahog is a wonderful town, because of who we are and what we do, not because of some guy who stole beer 300 years ago. Especially when he did horrible things to some of our fellow citizens.

Peter: Yeah, I guess you're right.

Lois: Thank you, Peter. Now, crowd of angry whites, I think we all owe our Native American friends an apology.

Peter: Well, Brian, I guess I owe you an apology, too. You were right from the start. Sorry things got so heated between us and that I took a dump in your dog food.

The idea that debate about whether historical statues should stay or go can come down to "angry whites" versus sympathetic minorities is a nasty, simplistic caricature popular among the left. Democrats, of course, ignore the crazy leftist mobs that tore down statues of everyone from Abraham Lincoln to Frederick Douglass this summer. The "Where does it end?" question has certainly been proven valid in 2020. Unfortunately, that rational discussion was never given a chance to happen.

Surprisingly, the episode alludes in the end to its own bias and the larger bias of Hollywood during a final Griffin family conversation on the sofa.

Lois: Well, thank God this whole controversy is behind us.

Brian: Yeah. And Peter, I'm glad you came to your senses.

Peter: Me, too. You know, we might even win an award for this.

Peter: Yeah, award voters love it when someone with a right-leaning viewpoint admits they're wrong. They declare it's good storytelling and character development.

Peter: Yeah, all those. And many more. But can anyone name a single movie where someone on the left took on a more Republican-leaning viewpoint? Doesn't even have to have won an award. Just has to exist. Anyone? Anything?

The dialogue manages to make a point while being incredibly offensive at the same time. None of the films mentioned represent a character with a "Right-leaning" or "Republican-leaning" viewpoint. Must we constantly remind the left that it was the Democratic party that enforced Jim Crow laws? The white supremacist KKK was the terror arm of the Democratic party in the south for decades. Do Hollywood writers who lean Democrat ever acknowledge that party's horrible role in U.S. racial history or the role the "progressive" left played in promoting eugenics and white supremacy through much of the 20th century?

Now, having said that, it is still notable that Family Guy at least attempts to acknowledge an elephant in the cultural room. Beyond a few directors like Clint Eastwood, Hollywood almost never creates content with right-leaning or Republican-leaning heroes. The cultural bias is part of the reason movie-going was in decline even before COVID.

So, Family Guy created an episode using all the usual obnoxious leftist tropes about white men and conservatives and then admitted Hollywood generally only creates entertainment filled with left-wing tropes. Well, at least the writers are honest about the bubble in which they live.

This rant was brought to viewers in part by Kay Jewelers. You can fight back by letting these advertisers know what you think of them sponsoring such content.