President Obama spoke out about NFL quarterback Colin Kaepernick’s ongoing protest of the National Anthem on Monday. Because, what else would you do at a gathering aimed at the promotion of international financial stability? 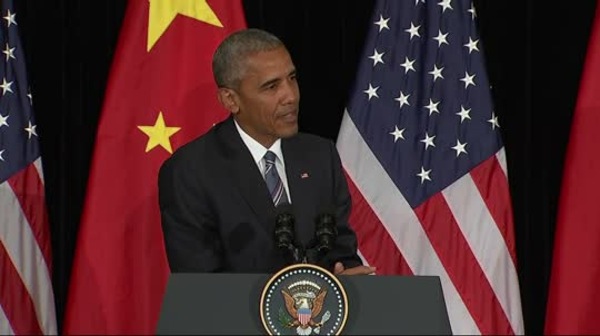 “In terms of Mr. Kaepernick, I’ve got to confess that I haven’t been thinking about football while I’ve been over here and I haven’t been following this closely, but my understanding, at least, is that he’s exercising his Constitutional right to make a statement. I think there’s a long history of sports figures doing so. I think there are a lot of ways you can do it. As a general matter, when it comes to the flag, and the national anthem, and the meaning it holds for our men and women in uniform and those who fought for us, that is a tough thing for them to get past, to then hear what his deeper concerns are. But I don’t doubt his sincerity, based on what I’ve heard. I think he cares about some real, legitimate issues that have to be talked about. And if nothing else, what he’s done is he’s generated more conversation around some topics that need to be talked about.”

Obama also went on to praise what he called Kaepenick’s “active citizenry.” Saying, he’d “rather have young people who are engaged in the argument than people who are just sitting on the sidelines and not paying attention at all.”

Of course, Citizen Kaepernick’s activity will be spent primarily on the sidelines this year, as opposed to the football field.

As for what exactly Kaeperick is protesting, perhaps POTUS can offer some insight on that. Because in recent days, Kaepernick has gone out of his way to say he’s not protesting the police, in addition to not protesting against the military. Which, leaves us no other choice but to see the quarterback as simply a symbol of some Mulligan Stew of America-loathing, unpatriotic fervor.

Something which the President believes is, “a conversation around some topics that we need to talk about.” Whatever that means.