Salon is scared of a girl. Okay, I’m scared of this girl too, but for a completely different reason. According to Salon, though Rousey is a woman and has become one of the most dominant athletes in any sports, male or female, she shouldn’t automatically be considered a role model on that basis. Because…wait for it…transphobia: 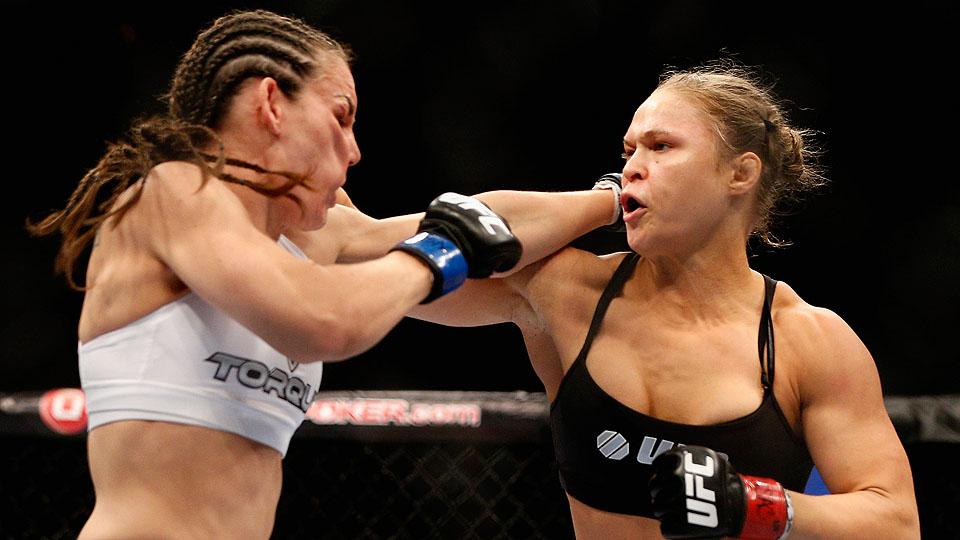 “While Rousey is all people say she is (and more) athletically, outside of martial feats, her role model status is questionable. First, Rousey has a history of highly transphobic remarks and flat-out ignorance when it comes to trans athletes. In 2013, when UFC fighter Matt Mitrione made offensive comments about transgender MMA fighter Fallon Fox, calling her a “lying, sick, sociopathic, disgusting freak,” the New York Post asked Rousey for her thoughts on Mitrione’s words. Rousey said he expressed himself “extremely poorly” and that she could “understand the UFC doesn’t want to be associated with views like that.” But in that same interview, Rousey didn’t exactly demonstrate a predilection for sensitivity. “She can try hormones, chop her pecker off, but it’s still the same bone structure a man has,” Rousey said about Fox. “What if she became UFC champion and we had a transgender women’s champion? It’s a very socially difficult situation.”

It’s only a “socially difficult” situation thanks to people like Rousey. Earlier this year, Rousey tried softening her words — though not changing her opinion — in an interview with the Huffington Post. “From what I’ve read, it seems if like you’ve already gone through puberty as a man, even if you really want to rid yourself of those physical advantages, I just don’t think science is there yet.”

Rousey studied the wrong “science,” because claims of supposed transgender superiority in athletics are categorically false and have zero scientific backing.”

Zero scientific backing of transgender superiority you say? Okay, well let’s ask someone who has actually felt the power of a female fighter and a transgender fighter, and see what they say.

Here’s what MMA fighter Tamikka Brents had to say after suffering a fractured orbital socket and a concussion at the hands of transgender fighter Fallon Fox:

“I’ve fought a lot of women and have never felt the strength that I felt in a fight as I did that night. I can’t answer whether it’s because she was born a man or not because I’m not a doctor. I can only say, I’ve never felt so overpowered ever in my life and I am an abnormally strong female in my own right,” she stated. “Her grip was different, I could usually move around in the clinch against other females but couldn’t move at all in Fox’s clinch…

“I still disagree with Fox fighting,” Brents stated. “Any other job or career I say have a go at it, but when it comes to a combat sport I think it just isn’t fair. At least not until we have more scientific proof that it is or isn’t fair. More research is needed for sure. Like I said, I am not a doctor, I can only say my opinion and I don’t believe that she should be allowed to fight other women. If it were strictly BJJ or wrestling or something like that sure, but MMA is a completely different sport.”

Hmm. Could it be that “his grip was different” because his gender was different? Apparently concussions and fractured orbital sockets aren’t science.

But that’s not the only thing that bothers Salon:

“But her insensitive musings go beyond transmisogyny and transphobia. This summer, Rousey decried what she called a “do-nothing b*tch”:

“I have this one term for the kind of woman that my mother raised me to not be and I call it a ‘do-nothing b*tch.’ The kind of chick that just, like, tries to be pretty and be taken care of by somebody else. That’s why I think it’s hilarious, like, that people like say that my body looks masculine or something like that. I’m just like, listen, just because my body was developed for a purpose other than f*cking millionaires doesn’t mean it’s masculine. I think it’s femininely badass as f*ck. Because there’s not a single muscle on my body that isn’t for a purpose. Because I’m not a do-nothing b*tch.

Being proud of your body is great. Burying other women because they have a different body than yours is not. As Alanna Vagianos noted in the Huffington Post, Rousey’s DNB speech is “certainly not empowering, and it certainly does nothing to combat the large issues that create a society where athletic bodies like Rousey’s are judged as less than.”

Wha? I thought libs didn’t want women to just “try and be pretty, to be taken care of by somebody else?” I thought libs wanted women to be self-sufficient, with an identity that wasn’t dependent on a man? Has their anger and rage at Ronda Rousey’s refusal to kiss the transgender ring contorted them into a rear-naked choke of stupid? To the point where they’re actually contradicting their own feminist talking points in order to shame her into wearing their militant feminist crown?