One of television’s most sacred and central responsibilities is making sure they only display images that are “right and appropriate” for the viewing public to consume. Yet, judging by NBC’s decision to not show the post-game prayer gathering of players on the field after the Patriots’ 28-21 victory over the Steelers in the Thursday night Kickoff Special, NBC clearly believes public displays of the Christian faith are not suitable for all audiences.

It isn’t as if the prayer didn’t happen. Despite the heavy downpour, members of the Patriots and some of their coaching staff knelt and bowed their heads. MRCTV’s Eric Scheiner and Dan Joseph were at the game and captured it on video:

NBC, however, immediately cut to commercial and didn’t show the prayer thereafter.

But why? The sports media constantly bemoans the violence and brutality of football, plus all the criminal and sometimes tragic off-the-field issues involving players. Why wouldn’t they want to show a peaceful –and predictable (prayers happen after most games and usually involve members of both teams) – moment where players aren’t hurting others or themselves, and giving thanks?

Especially, when the post-game prayer has its roots in opposition to violence?

Nearly 25 years ago, after a hard fought Monday night game between the Giants and the 49ers in 1990, a fight broke out at midfield between the two teams. Just when it looked like things were going to get completely out of control, off to the side a group of players from both teams gathered to take a knee and give thanks.

Like the Christian faith itself, from that small group of believers surrounded by chaos an event launched that caught on like wildfire. Players loved it and duplicated it at football games from the pros all the way down to the high school.

Everyone loved it. And it's been a feature of NFL games ever since. 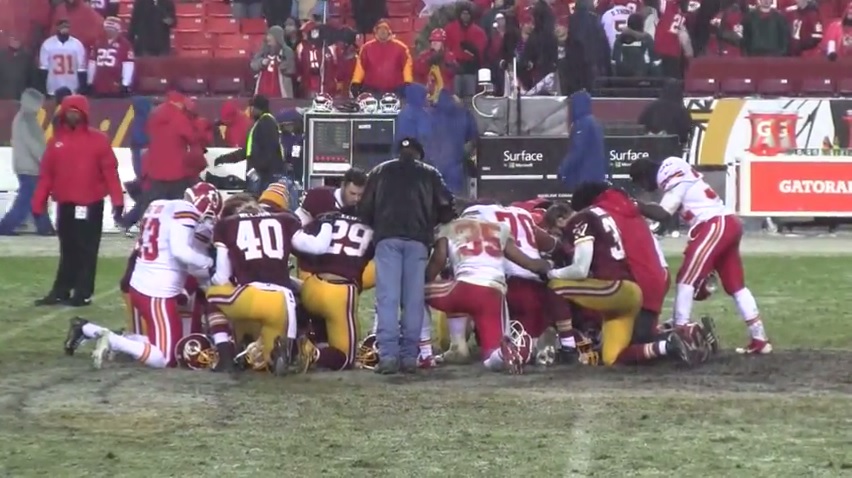 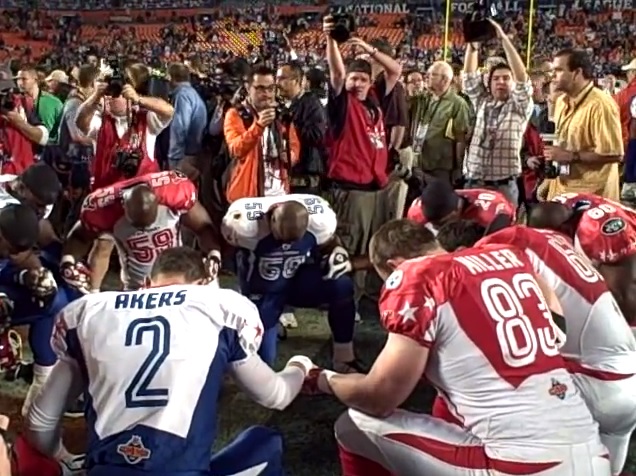 Everyone loved it that is, except for the sports media and the NFL. Shortly after the first on-field prayer gathering Rick Reilly, then of SI, penned a column titled, “Save Your Prayers, Please.” Where he ripped what he called the “heavenly huddle.”

"I don't think your average fan goes to football games to be touched. I don't think that when he loads up the Thermos and pays $10 to park, he's looking to get proselytized," he wrote. "The only conversions he cares about are extra points. I hope that the NFL will have the good sense to curtail these huddles."

Though Reilly’s appraisal of Americans attitudes toward public prayer are highly suspect, this had to end and the NFL tried it’s best to do so. At the 1991 NFL owners meeting, the owners bowed to the media secularists and vowed to enforce the seldom enforced non-fraternization rule, where players would be given limited time to clear the field, or be fined.

However, when the Giants and 49ers met again on Monday Night Football in September of 1991, those same players from those same teams defied the league anti-prayer rule and took a knee regardless. The fines that had been threatened by the NFL never materialized.

Which brings us to today where the anti-religion secularists in the sports media, unable to count on their apparently less dedicated secularists in the upper reaches of the NFL, are left to do the one thing they can do to stop the most benign and harmless act a football player can ever take part in: put the gag order on God.