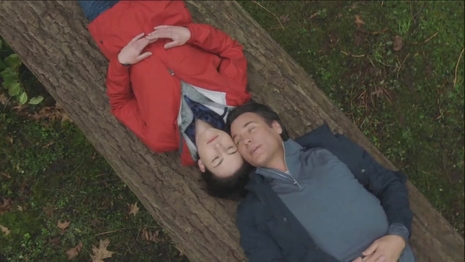 Disney-owned ABC continued its anti-parental rights storyline on Wednesday’s A Million Little Things as trans student Madison/Maddox (Ash Spencer) snuck out of her house after her parents told her they were pulling her from her school, Sussex Prep. Panicked, her father Clark (Sebastien Roberts) reaches out to her teacher Rome (Romany Malco) in a desperate attempt to find her. And like an old ABC After School Special, Clark begins to see the woke light after Rome schools him about his trans daughter.

When we left off last week, Rome found out that Madison/Maddox’s parents had threatened to pull their funding from Sussex Prep if Rome wasn’t fired. In this week’s episode, “Just in Case,” Rome hands in his resignation letter to avoid the loss of funds, but the dean refuses to accept it, claiming, “all you did was protect a child that couldn’t protect themselves":

Regina: You sure you want to do that?

Rome: I don't know what else I can do.

Rome: It's my resignation. Look, I know Maddox's parents blame me for him being trans. I'm sorry, man. I was only trying to help, and obviously, I just made things worse.

Dre: I'm not accepting this. I thought about it a lot, and all you did was protect a child that couldn't protect themselves. The fact that you had to defend them to their parents is heartbreaking. You're doing exactly what I brought you here to do. I'm just sorry the Ainsworths don't see it that way.

Rome: But I thought you said if I wasn't fired, the Ainsworths would stop donating to the school.

Dre: I think that's happening either way. Clark called me this morning. They're pulling Maddox out of Sussex.

Oh, the horror! (#eyeroll) This storyline has gotten so absolutely ridiculous it would almost be laughable if it wasn’t such a serious issue. Though it may not seem possible, it continues to get even worse as the episode progresses.

After Rome gets home, he receives a knock at his door and finds Madison’s father Clark standing there asking where his daughter is:

Clark: This morning, Isabelle and I told Madison we were taking her out of Sussex. She got upset, stormed up to her room, which is where we thought she was. She must have snuck out. I thought maybe she was with you. I mean, you're the one who put all those ideas in her head.

Rome: Look, I know you're upset, but I didn't put any ideas in his head.

Clark: "His?" See, this is exactly what I'm talking about. Madison wasn't talking about any of this stuff until you started teaching her.

Rome: Listen. Mad-- Your child came to me for help, and I was determined to make them feel safe. That's why I came back to Sussex, to look out for kids in the way that my teachers didn't look out for me when I was there. Yeah, yeah, I know. You think that the little stunt you pulled at the water fountain was just an innocent prank. But what y'all did to me back then has stayed with me to this day.

Clark: Is that what this is? You came back to Sussex with a vendetta, and you're taking it out on our kids?

Rome: No, I came back to Sussex to protect other kids who might be a target like me! Ever since I left that place, every restaurant I walk into, every job I apply for, in any situation where I'm the minority, I'm wondering if it will embolden someone enough to disrespect me in the way that you and that institution did.

Clark: I said I was sorry.

Rome: It's not about me! I'm talking about your child! My classroom didn't make Maddox trans. If anything, it was the first place he felt safe enough to be who he really is, and this morning, you and your wife decided to take that away from him.

Clark: I love Madison. And I'm not trying to keep her from being who she is. I just feel like I don't know my daughter anymore. When she was little, and the way she looked at me, just that look in her eye, she could convince me to give her anything. She was Daddy's little girl. And now I just feel like I'm losing her.

Could it be more obvious where this is heading? We clueless conservatives of the world would be so lost without people like Rome’s character to 'wokesplain' things to us so we can learn how to think, vote and act as they do. And if we fail to see the light, then we’re just racist, homophobic, transphobic, etc.

Of course, the writers are preparing to have Clark learn from Rome’s leftist wisdom because every liberal story needs a liberal happy ending, amirite?

Rome: Clark, I know that you love your kid. But right now, you're the one who's hurting him the most. Maddox is the same child that you raised. He is smart. He's ambitious. He advocates for himself. You say with one look, Madison could convince you to give her anything. In this moment, all your kid wants is for you to show that you will love him for whoever he is.

Every child should absolutely be loved unconditionally. But in the minds of liberals, you can only do that by handling a situation as they see fit. No other views but their own will be tolerated. Hence Rome’s 'wokesplaining.'

As Rome and Clark rush to a spot in the woods Madison/Maddox likes to escape to when she’s troubled, Clark finally gives into “proper pronoun” pressure while Rome smiles at him proudly:

Clark: When Madison's little brother was born, just to get some special time, I used to take her here on Sundays. She loved to climb the fallen trees. She and I would look up at the clouds and forget about everything. Come on.

Rome: No, no. I think you both could use some more of that special time.

Clark: I don't know how to talk to him.

It was heartwarming to later see father and daughter finally communicating while lying opposite each other on a fallen tree at the end of the episode. Every child should feel safe and loved like that in real life, no matter what.

But it’s cringey that it took a liberal teacher playing the role of hero standing up to ignorant, racist parents to get to this point. If the writers had decided to have Madison/Maddox’s parents seek mental health treatment for their daughter’s gender dysphoria, we wouldn’t be seeing such a heartfelt moment. In liberal Hollywood, happy endings only happen when liberal ideology is obeyed.

As we’ve said before, it’s obvious propaganda meant to squash parents’ rights and make it appear as if teachers should be allowed to involve themselves in matters that should only be between a child and his/her parents.

Despite poor season average ratings (this episode came in last place among all major networks), it was recently announced that A Million Little Things has been renewed for a fifth season. So, we can unfortunately expect A Million Little Agendas to continue when season 5 releases in 2023.

Conservatives Fight Back! This episode was sponsored by AT&T, Progressive, and State Farm. Click each advertiser for their contact information so you can let them know how you feel about this propaganda. Your efforts appear to be working as a few earlier sponsors such as Toyota, Liberty Mutual, and GEICO have not appeared in these latest episodes, so, be sure to thank those former sponsors, and keep up the good fight!