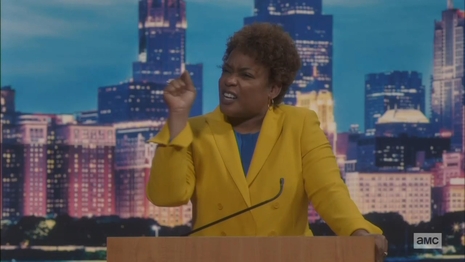 AMC’s super woke, anti-cop drama 61st Street has continued to pour it on thick with their extremist, far-left, Black Lives Matter (BLM) agenda. In the past two episodes, the show has falsely claimed that police presence in schools is a “declaration of war” and that the system can't be reformed, because it supposedly began as a slave-catching patrol and is therefore "functioning as it should." It also denounced the justice system for “locking (black) people up.”

In last week’s episode, “Chess Moves and Poker Chips,” the show’s annoyingly self-righteous character Martha (Aunjanue Ellis), who is running for alderman on Chicago’s South Side, spoke at a church about police officers in public schools, ranting, “they pay for the people who kill our children to be in school with them":

Martha: My beautiful son David has autism. His needs aren't met by regular teachers, so he has a social worker. Her name is Carmen. Before the end of next week, I am going to have to tell my son that Carmen has to stop being his daytime mom. Why? Because our schools have lost the funding to pay her. At the same time, they pay for more police to be in our schools. Now, what does that say? They pay for the people who kill our children to be in school with them. That is a declaration of intent if I ever heard one. No, no, no, no. Let's call it what it is -- It is a declaration of war.

Ironically, after making it appear as if police had killed her autistic son when he was wandering lost in a white neighborhood, this week’s episode, “Over the Wall,” showed they brought him home safely, albeit after scaring him by demanding he show his hands as officers need to do in any situation to protect themselves and the public.

They somehow failed to see the irony in their own storyline. Removing officers from her son’s school leaves him more vulnerable and unprotected. A social worker won’t do much good if a school shooter shows up or if a fellow student tries to assault her son with a weapon.

Martha continued preaching in her typical haughty manner in this week’s episode at a televised debate with her opponent in which she pushed for the complete eradication of our entire justice and police system despite the fact her husband is a lawyer. In Martha’s opinion, bringing bad police officers to justice isn’t good enough and holding black criminals accountable is wrong:

Martha: I would like to ask my opponent a question, please.

Martha: Yeah, do you know the name Rufus Porter?

Martha: Yeah, he was a child who was shot by the police in our ward, and you don't know his name. I don't think it's because you don't care. I think it's because you stopped listening. Because there are too many Rufus Porters to remember. See, I don't want the cop who shot Rufus Porter to go to trial. I don't want the justice system to lean into prosecuting police officers. I'm not interested in reform. The origins of policing in America began as slave-catching on plantations. You cannot reform a system that is functioning as it should. You have to scrap the whole thing! If you are part of this justice system that is locking our people up, shame on you! Shame on all of you.

Pushing the false narrative that policing has origins in slave-catching on plantations is rather dubious of the show, but it’s a typical straw man argument used by SJWs in an attempt to bolster their position. Of course, black lives matter, and any cop who is racist and/or abuses their power needs to be held accountable.

But, if 61st Street truly cared about black lives, they wouldn’t be depicting the South Side as an innocent, safe neighborhood as they have. If the show is to be believed, police are the only real threat to residents, when in fact, less than half a percent of black lives are taken during police conflicts.

What they should be showing is the reality that crime is the biggest threat to black lives and that more black lives are lost weekly to criminal violence than all lives lost weekly at the height of the Vietnam War. Defunding police has only made things worse as crime rates have skyrocketed, standards in hiring officers have been lowered, and the attrition rate has soared.

BLM initiatives are actually destroying black lives, yet 61st Street wants to promote them? AND do away with the justice system that has held bad officers accountable? In what kind of world would any of that make sense?

Oh, that’s right. Liberal Hollywood. Too bad their harmful propaganda isn't self-limiting. It has far-reaching effects across the entire country. All the more reason to cancel this dangerous show immediately.

Conservatives Fight Back! These episodes were sponsored by T-Mobile, Mercedes-Benz, and Capital One. Click each advertiser for their contact information to hold them accountable for supporting this propaganda. Your efforts appear to be working as a few earlier sponsors such as Acura, Geico, and Popeyes have not appeared in these latest episodes, so, be sure to thank those former sponsors, and keep up the good fight!