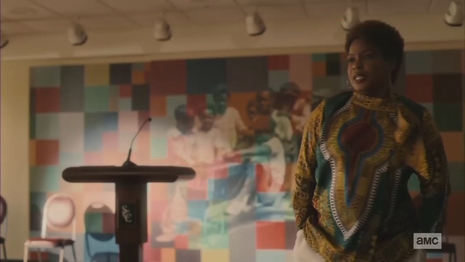 How many liberal talking points can Hollywood writers fit into one scene? Apparently a lot if we go by AMC’s new anti-cop drama 61st Street, which managed to rant about feminism, white people, and the police all in one brief scene on Sunday’s episode, “Barefoot and Dangerous.” They even went so far as to claim policing is “just personal security for rich, white folks.”

The scene in question featured Martha (Aunjanue Ellis), who is running for Alderman in Chicago’s South Side, and who last week demanded abolishing the police to protect her community. This week, Martha gets a glimpse of an article by a reporter titled “Barefoot and Dangerous,” just before she’s about to speak again. (She was given advice last week to put her bare feet on the ground as a way to overcome her nervousness with public speaking).

Spotting the reporter in the crowd, who is a white man, she decides to scold him. And in the process, she claims that police only exist as personal security for white people:

Martha: Yeah. Mr. Sessions is saying that I am "barefoot and dangerous." No, it's alright. He's right. I am dangerous. Women have always been judged in this way. Jeannette Rankin ran for Congress in 1916 and they said that her gowns were too "severe." Hillary Clinton -- they said that she was "confused about her gender" because her pantsuits were too baggy. After all of this time, they are still more comfortable with women carrying babies than ballots.

Martha: And here I come, shoeless, barefoot me, and he is more concerned about what is not on my feet than what is coming out of my mouth. So, we have to ask ourselves, what is hiding underneath the cheap headline? I know. Every woman in this room knows.

Martha: It's fear. It's fear because I am demanding accountability from the Chicago Police Department.

Martha: Fear that I want to end policing that's just personal security for rich white folks. Fear that I am demanding an end to the executions of black and brown children. Fear I want to build a movement. I want to build a future where black and brown children can be children and where they are safe and where they can thrive. And Mr. Sessions here is afraid because, in that future, he has to lose his first place in line. It ain't about my shoes! It ain't about my shoes. Don't get distracted! It's about my ideas.

As long as dangerous shows like 61st Street keep spewing such dangerous rhetoric, none of us are safe.

Conservatives Fight Back! This episode was sponsored by T-Mobile, Mercedes-Benz, and Capital One. Click each advertiser for their contact information so that you can let them know how you feel about this episode!