Marriage Is Just a Business Proposition According to 'The Catch'

ABC's new series The Catch is certainly rife with the seven deadly sins, but that doesn't stop them from sharing their “wisdom” when it comes to marriage. The mid-season finale of the cat and mouse-style drama entitled “The Happy Couple; The Wedding” features a heist at a high end wedding. Two con-men, Ben (Peter Krause) and Rhys (John Simm), attempt to weasel their way into the wedding by helping the couple (Stephanie and Morgan) plan the rehearsal dinner. Things take an interesting turn however when Morgan assumes Ben and Rhys are a gay couple.

Morgan: But it's not about us. At this point, it's not even about the marriage, you know? How about you guys? Are you married? 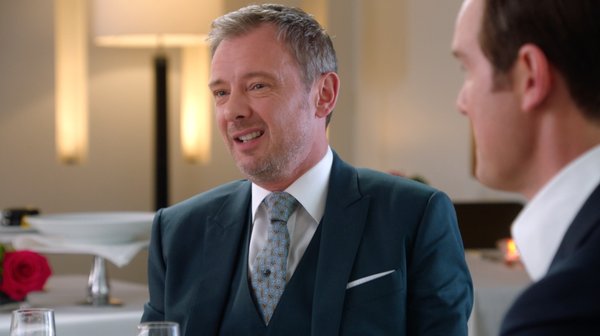 Stephanie: You see? Honey, why can't we do that? You know, make the commitment to each other without the circus and the politics?

Morgan: Yeah, I know. How long have you been together?

Stephanie: How do you do it?

Stephanie: Mm-hmm. I knew it. Why can't straight people have that?

Morgan: Well, you know, we -- we have hit a bit of a road block. We're trying to write our vows right now...Mm-hmm...And it just feels disingenuous.

Stephanie:Yeah, because, you know, you have to promise forever, and... I can't promise that.

Morgan: I can't, either. I really can't.

Rhys: No, no. You can't promise that. What you can promise is that you will grow tired of each other.

Rhys: You will have an affair with your personal trainer. You know, who knows? We just don't know.

Rhys: You're right. Thank you. He's right. Marriage is not about love.

Rhys: Is what it is.

Yeah, that whole promising forever stuff is really hard! No, it is really hard. That's why it takes a covenant to make it actually work. It is not simply a business proposition. If you enter marriage as simply a merging of capital then you will eventually find your assets in a hostile takeover. To his credit, Ben does try to make this point but often the voice of reason is shouted down by the voices we really want to hear. We want marriage to be more like a business so we can justify our poor behavior and have an opt out clause.

The reality is, our culture increasingly views marriage this way. Open marriage, gay marriage, common-law marriage, etc. The true meaning of the word is gone. The fact that you put adjectives like open or gay in front of a word which by definition excludes such activities is an oxymoron.

What often gets overlooked is the fact that love is a choice, not a feeling. Disney and Hollywood in general have done love a huge disservice. People feel they have fallen out of love which justifies falling out of marriage. Staying married is a choice and it must be the intention of both the husband and the wife from day one. If divorce is an option, it will likely be one that is exercised. We need our media to be honest that marriage is difficult but it would be nice if they also said it was worth the fight.