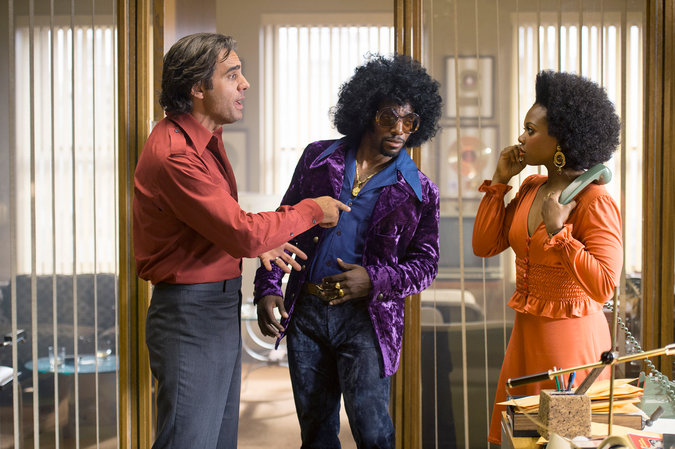 Let's be honest. There is never a shortage of topics to write about where the HBO show Vinyl is concerned. As stated previously, it is a brutally honest look at the 70's record industry. So rather than write each week about how much drug use there is or how many sex scenes we see, it makes more sense to wait until the show crosses a line that isn't white and powdery.

In this week's episode “Rock and Roll Queen,” we get an interesting glimpse into the repercussions of sexual promiscuity. American Century's secretary, Cece, was having an affair with one of their more successful artists, Hannibal, but he eventually left the struggling label for greener pastures. In a meeting about new artists, Hannibal's name comes up and Cece bursts into tears and leaves the room. The reason soon becomes obvious to everybody. She is pregnant with Hannibal's child. Andrea, the new no-nonsense executive at American Century, is furious at how the business has been run and lets everyone know about it.

Andrea: This one, too? Nobody told you girls not to f##k the American Century artists?

Richie: Yo, lay off her.

Andrea: You lay off her. All the guys in the world, she's got to pick Hannibal? Suddenly the rest of us can't discuss an act in a meeting without the secretary dissolving in tears?

Richie: We'll talk about this later.

Andrea: And this one's banging the singer.

Jamie: Which has nothing to do with anything.

Andrea: No one wants to make girls a&r reps because a&r reps give direction and criticism, which is almost impossible to do with a c##k in your mouth.

Andrea: She's... Are you pregnant? F###ing Hannibal? Are you kidding me? Why are the women such stupid f###ing twats?

Andrea: What? You want me to hold her hand? Walk her to the Sanger Center?

An offer to take her to the Sanger Center, as in Planned Parenthood. What is interesting, though, is how back then it was actually a big deal! If Vinyl was called iTunes and filmed in today's society, this scene wouldn't even make the rough draft. Cece would have already had a couple abortions and a “My body. My choice.” t-shirt to show for them.

But apparently, Richie feels somewhat responsible for the whole ordeal because he encouraged Cece to keep an eye on Hannibal. Thus the episode concludes with Richie offering her money to take care of it.

Gee, what an honorable guy....