Hulu Travels Back in Time to Mock Nixon

Hulu's latest mini-series “11.22.63” released its first of eight episodes this week and honestly... it's excellent so far. Based on the book by Stephen King and produced by J. J. Abrams how could it be anything but good? Even James Franco, who plays the main character Jake Epping, is unusually decent.

To this point “11.22.63” is your standard time travel tale but one can only imagine there will be more to it as the episodes unfold. Franco travels through “The Rabbit Hole” and goes back to the 1960's in an attempt to prevent the assassination of JFK. While there he encounters occasional characters who tell him, “You don't belong here,” and the universe itself seems bent on stopping him from intervening. Only seven more episodes will reveal what is actually going on.

The only downside to the first episode is two jabs at Richard Nixon. This is still a Hollywood production, after all, and being set in the politically charged era of the 60's, they just couldn't help themselves. The first occurs as Franco is getting a new suit in order to remain inconspicuous.

The nerdy tailor states: “When I vote it comes down to character. Richard Nixon has it. You look at him you think, ‘There’s a good man.’”

Franco, of course, can only give a less than enthusiastic, “Yeah.”

Later, as Franco is parked along the road he spies a political billboard with the unfortunate slogan “They can't lick our Dick. Vote Nixon.” But considering that's an actual campaign button people wore back then, one can hardly blame Hollywood for throwing it back it him. 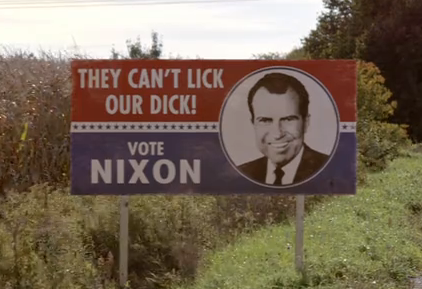 It seems likely the jabs at Republicans will continue throughout the series. In the end, perhaps Nixon will even be implicated in JFK's assassination. If you've read the book you already know. Please keep all spoilers to yourself.