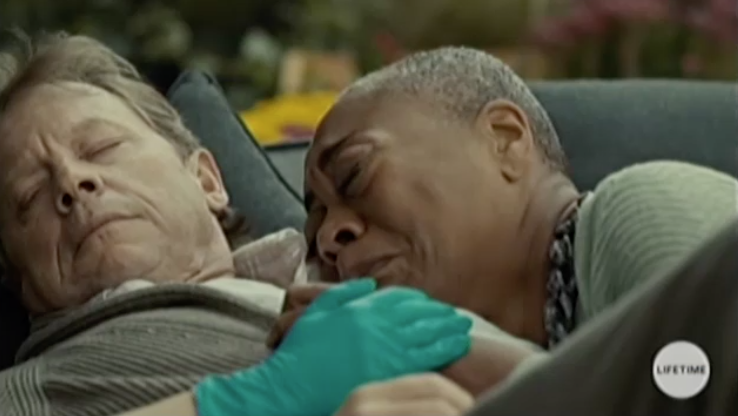 Lifetime’s euthanasia Drama, Mary Kills People, is no longer just championing the cause of assisted suicide for the terminally ill or those suffering from intense physical pain. Now, the show supports euthanasia for those enduring great emotional pain, such as due to the death of a loved one.

ER nurse Mary Harris (Caroline Dhavernas) helps people kill themselves so that they can die “with dignity.” Monday night’s second season premiere, “The Means,” had Mary justifying her decision to euthanize both a man dying from mesothelioma and his perfectly healthy wife because they want to die together.

Fortunately, Mary’s partner Des (Richard Short) points out the absurdity of murdering “perfectly healthy individuals who happen to be a bit sad.” Mary defends herself by claiming, “we shouldn’t be the ones to decide that Betty’s suffering is any less real than Victor’s.” Apparently Mary is capable of making the decision to end two people’s lives, but she’s not capable of differentiating between sadness and terminal cancer.

Mary: Betty and Victor want to die together. We've discussed it, and I support their decision.

Des: Mary, what are you talking about? Our service is for people who are dying.

Betty: Oh, we're all dying. It's just a matter of timing.

Victor: Trust me, son. I've tried to talk her out of it. We both have. She won't be swayed.

Des: Well, then let me be the one to sway you, Betty, because this is mad.

Betty: Listen, I know that there's a very popular opinion out there that choosing life is superior to choosing death. Believe me when I tell you I have no interest in any life without my husband.

Des: Mary, I'm gonna need a word. This is not what we do.

Mary: Yes, it is. We help people who want to die.

Des: No, we help the terminally ill shuffle across that rainbow bridge a bit faster. We don't murder perfectly healthy individuals who happen to be a bit sad.

Mary: Look, when they first asked me, I had the same reaction.

Des: I would hope so!

Mary: But then she explained it to me. Her life would be meaningless without him.

Des: She just needs a hobby. Knitting or birding or something.

Mary: And I've been through all of that with her, of course. You know that look that they have when they're ready, when death is their only option. She has that look. And we shouldn't be the ones to decide that Betty's suffering is any less real than Victor's.

Des: You know what? Two bodies equals suspicion equals investigation equals cops equals jail time. You know, I know you're all for pushing boundaries, Mary, but there are some boundaries that don't need pushing.

Des finally convinces Mary not to kill Victor’s healthy wife. However, after Mary euthanizes Victor, Betty becomes overcome with distress and jumps off the building, allegedly killing herself.

A quick Google search is sufficient to confirm that most suicides are due to impulsiveness. According to the New England Journal of Medicine, “more than 90% of people who survive a suicide attempt, including attempts that were expected to be lethal (such as shooting oneself in the head or jumping in front of a train), do not go on to die by suicide.” Additionally, numerous survivors of Golden Gate Bridge suicide attempts recall regretting their decisions to jump almost immediately after jumping.

At the end of the episode, it’s revealed that Betty’s suicide attempt failed, and she’s still alive, despite sustaining serious physical injuries. Mary visits her in the hospital room and asks, “I've heard when people jump, sometimes as they fall, they regret their decision. Did you?” In the pro-euthanasia world of Mary Kills People, Betty responds, “I regret waking up. He's gone. I would take my life again and again. I just don't have the means.” Mary then helps Betty kill herself in the hospital room.

It’s one thing for Mary Kills People to support euthanasia for people close to death. But to support killing healthy people while they’re emotionally unstable after suffering the loss of a loved one? That is completely absurd. While deaths of family members are incredibly heartbreaking, a system of allowing people to kill themselves due to emotional tragedy is clearly not sustainable for a society.