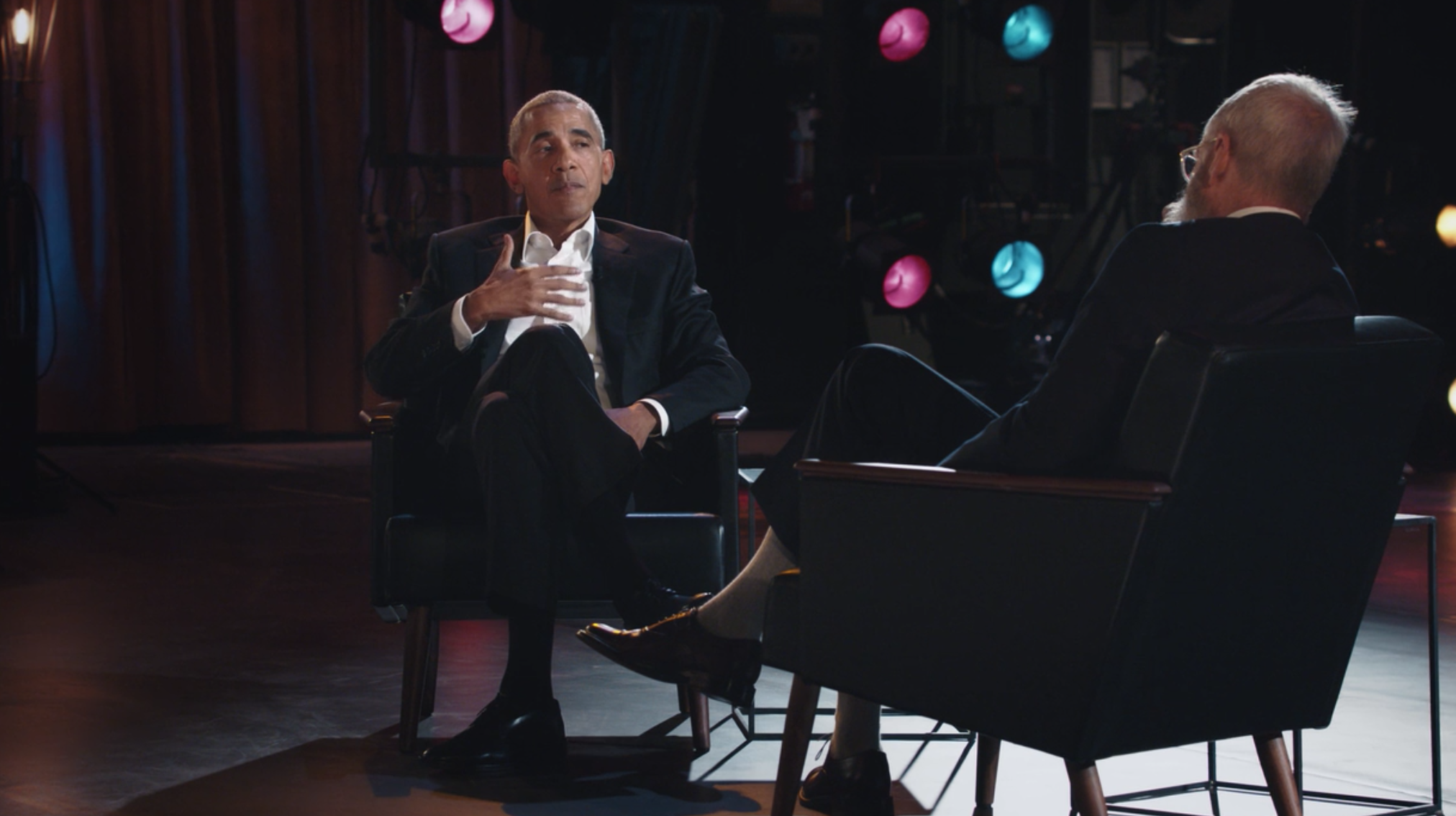 In an hour long, mind-numbing interview, David Letterman interviews former President Obama for the first episode of his 6-episode Netflix original series, My Next Guest Needs no Introduction. The January 12 debut episode concludes with a heartfelt message from the 70-year-old Letterman to the 44th president: “You are the first president I truly and fully respect.”

In the episode, titled “It’s a Whole New Ball Game Now,” Letterman discusses the “palpable sadness” he endured at the end of Obama’s presidency. Throughout the episode, Letterman makes various jokes acting as if Obama is still the president. At one point he mentions that Obama’s answer to a question “just makes me so happy you’re still president.” Later he fantasizes about Obama returning to the Oval Office after the interview. Obama cutely dashes Letterman’s hopes by explaining that if the Constitution didn’t prevent him from running again, his wife would.

Letterman asks Obama about his record in office, noting that Obama became president with two wars in motion and a collapsing economy. Obama proudly explains, “One of the things I'm proudest about is the fact that, within a year, we had the economy growing again and within about a year and half we were actually adding jobs again instead of losing them.”

Of course, the two neglect the massive debt and overregulation left behind by the Obama administration. Or the fact that during his administration’s final six quarters, the economy turned in annual average growth of 1.5 percent, much less than the beginning of his term.

But Obama continues to propound his success, claiming that while the cost of college and healthcare has been going up, the cost isn’t rising as fast anymore thanks to him, completely ignoring ObamaCare’s skyrocketing premiums.

The interview takes a brief intermission for Letterman to speak with Congressman John Lewis (D-Ga.), famous for leading the march on the Edmund Pettus Bridge in Selma. Lewis and Letterman gush about how Obama would have been a leader of the Civil Rights Movement had he been around at the time. Lewis also praises the 44th President: “[I] never saw a president so committed, so fair, so dedicated.”

Because a liberal TV show can’t say no to an opportunity to bash President Trump, Letterman bravely asks Lewis, who refused to attend Trump’s inauguration, “How big a setback is the current administration?” Lewis responds, “It is a major setback to the hopes, the dreams, and aspiration of a people. Not just African American, but all Americans, because I think what has happened in America today is a threat not just to our own country but to the planet.” The two proceed to discuss the setbacks America faces today, flashing pictures of white supremacist marches, while also flashing images of the Women’s March as a sign of hope for the country.

Early in the interview, Letterman and Obama briefly discuss Russian interference with the election through the media, which leads to a conversation about facts in the news. Obama asserts to roaring applause and laughter, “If you watch Fox News, you are living on a different planet than you are if you listen to NPR.” It’s not difficult to guess which “planet” Obama thinks is truthful.

Interestingly, despite giddy promotions by CBS, NBC, and ABC, reviews for the debut episode of Letterman’s show are mostly negative, with the Washington Post stating the show “fall[s] flat,” and USA Today calling the interview “half-hearted.” Perhaps liberal TV will learn that gushing for liberals and attacking conservatives isn’t a surefire way to garner success.