It appears as though Colin Kaepernick, Eric Reid, and Jeremy Lane will have some company next time they decide to kneel, or sit, during the playing of the National Anthem.

At least that’s what’s being reported by these two ESPN NFL reporters: 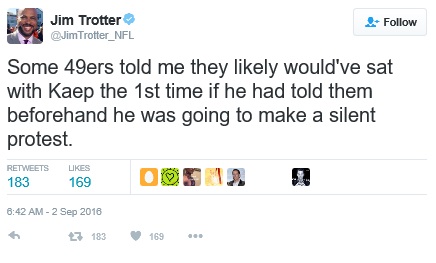 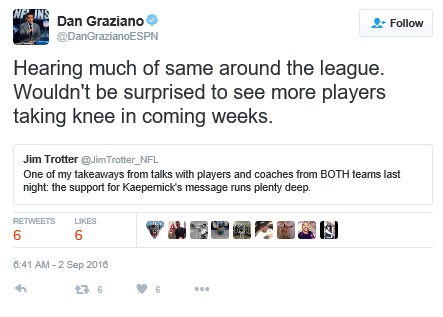 Which means, of course, that your hopes and dreams of soon being able to finally embrace your Sunday, Monday, and Thursday escapism have been thoroughly dashed.

There was a time when the NFL had an opportunity to nip this budding activism. Though, when they failed to punish Browns running back Isaiah Crowell for posting a pic of a cop getting his throat slit on Instagram, in addition to refusing to punish Kaepernick for wearing socks which depicted cops as pigs, the league sent a clear message to their players that they in no way would interfere with any attempts to turn the football field into a Social Justice Warrior Convention.

And the players were listening.