ESPN: Kaepernick Reminds Us America Is a 'Damn Good Place to Live'

Someone needs to get ESPN and 49ers Quarterback Colin Kaepernick a room. Preferably a room in another country. Yet, a room nonetheless.

Late Saturday night, ESPN’s Ian O’Connor continued the four-letter network’s praise of Kaepernick’s refusal to stand during the National Anthem, in response to what he calls “a flag for a country that oppresses black people and people of color.”

Though, O’Connor says don’t you dare call that un-American:

“Colin Kaepernick stood tall while sitting down, which is not an easy thing to do. In fact, what he did in benching himself for the national anthem on Friday night was the hardest thing he could possibly do. 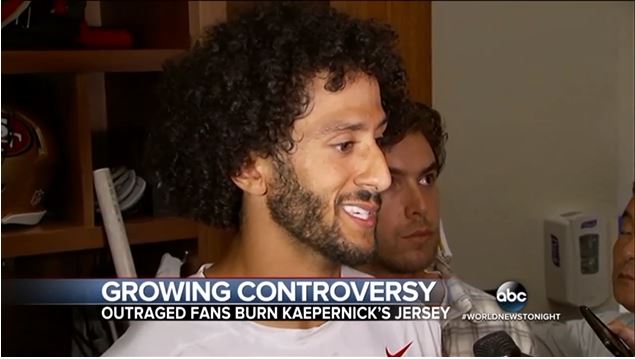 The easy thing? That would be standing silently with his teammates on the San Francisco 49ers sideline, cutting against the grain of his conscience. Nobody would've known the difference. Nobody would have reason to challenge his patriotism, to call him all kinds of nasty names, and to remind him, by the way, that he has devolved into a lousy quarterback who should be spending more time with his playbook anyway.

But he planted himself among the Gatorade buckets, understanding that in an age of 24/7 surveillance, he would be outed soon enough. Kaepernick didn't strike the kind of dramatic pose made by Tommie Smith and John Carlos at the 1968 Summer Games in Mexico City, and that was OK. He made his statement loudly and clearly.

"I am not going to stand up to show pride in a flag for a country that oppresses black people and people of color," Kaepernick told NFL Media's Steve Wyche, confirming Pro Football Talk's original report. "To me, this is bigger than football, and it would be selfish on my part to look the other way. There are bodies in the street and people getting paid leave and getting away with murder."

An unscientific survey of Twitter reaction from players, fans and observers offered more evidence that the country is divided, perhaps still broken, along racial lines. This emerged as the one undisputed truth about a story that will have legs as long as the quarterback doesn't use his during the pregame anthem:

Kaepernick is a 28-year-old biracial man who was raised by the white parents who adopted him, and who believes he can no longer remain silent in a country where young, black men are too often shot by overheated cops, and where blacks are forever asked by whites to rise above obstacles that whites themselves created.

African-American athletes are often asked (unfairly, perhaps) to speak out on social issues and, well, Kaepernick just did. If you don't like what the man did or said, that's your prerogative. But telling him that what he said and did was un-American is to lose sight of what it means to be an American.

In some corners of the globe, Kaepernick might face prison time or worse for publicly "disrespecting" his country. Only the quarterback didn't disrespect the United States. While pointing out its fatal flaws -- socioeconomic and justice systems still tilted against African-Americans after all these years -- Kaepernick unwittingly reminded the world that the U.S. is still a pretty damn good place to live.

His team released a statement praising what the anthem represents but recognizing that Kaepernick's boycott matched up with "such American principles as freedom of religion and freedom of expression." His league said players are encouraged but not required to stand for the anthem. His coach, Chip Kelly, said he had no right to tell any player how to honor, or not honor, his country.

This is what American servicemen and women have defended here and abroad -- Kaepernick's right to sing the national anthem at the top of his lungs, and to refuse honor it altogether. As long as he's not interfering with his teammates' right to make their own red, white and blue choices, what's the problem here?

But yes, people had problems. A lot of people. Matt Hasselbeck, former NFL quarterback and current ESPN analyst, tweeted this of Kaepernick's move: "Easy way to make sure you're NOT the starting QB on opening day. #Sept. 11."

On the job front, perhaps some broad-minded Niners players, coaches and executives were less concerned with the real-world "distraction" they'd have to deal with and more impressed by the fact Kaepernick showed some courage and leadership at great personal risk. "If they take football away, my endorsements from me," Kaepernick said, "I know that I stood up for what is right."

Rebranding disrespect to America and its flag as patriotism is, of course, verbatim from the leftist handbook. If people call Colin Kaepernick un-American, it’s not because they think he doesn’t have the right to speak. They say it in response to his actual words and actions.

Also funny is that O’Connor feels Kaepernick’s protest will remind the world that the United States is “still a pretty damn good place to live.” Really? How is telling the world that our nation oppresses black people and minorities a good thing? Upon reading Colin Kaepernick’s protest, will people in Africa or Central America more likely think, “Hmm, maybe I’ll go to America where I’m free to speak my mind?” Or, “Holy cow! American cops ruthlessly murder minorities with impunity, and nobody does anything about it!” 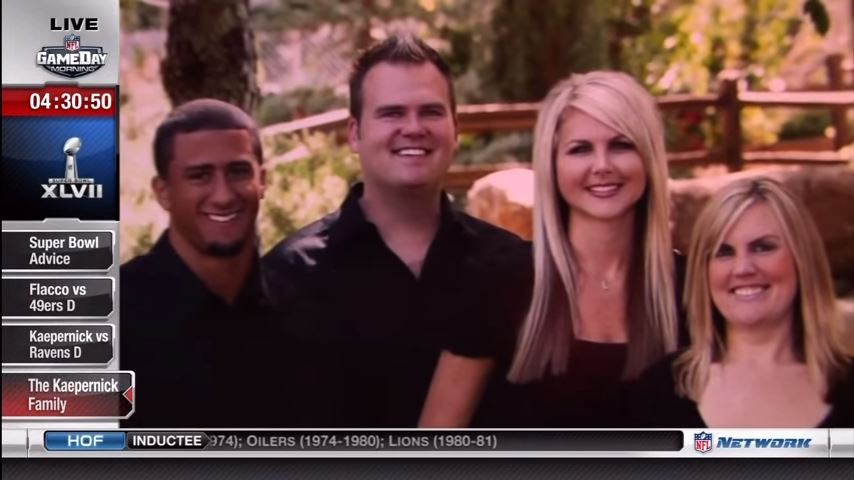 O’Connor, honestly, likely has no idea himself what he meant when saying that whites forever ask blacks to overcome obstacles “that whites themselves created.” Just remember the important things here: a white family adopted Colin Kaepernick, who was drafted into the league by a white head coach and General Manager, paid millions of dollars by NFL owners who happened to be white, a majority white country has now twice elected a black President, and you’re all racists.