‘The Crown’ on Margaret Thatcher: 'She’s Destroying the Country!' 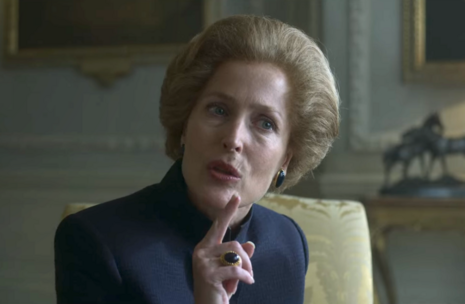 In the fourth season of Netflix’s The Crown, released November 13, the audience gets a couple of storylines they’ve been waiting for. This season heralded the entrance of Lady Diana Spencer (Elizabeth Debicki, The Night Manager) and her tumultuous beginning as Princess of Wales. For those more interested in the political intrigue than the romantic, season four also brings us Margaret Thatcher (Gillian Anderson, right) as Prime Minister.

While the portrayal of Mrs. Thatcher is hardly positive, it was much more balanced than might be expected from a major addition to pop culture that is likely to be the first introduction to Thatcherism for many viewers. Still, she’s portrayed as cold and uncaring, and the show talks about the rise in unemployment as the Prime Minister tries to unravel decades of government reliance. One scene, though, goes completely over the top.

In episode 5 “Fagan” common man Michael Fagan (Tom Brooke, Preacher) breaks into Buckingham Palace to tell the Queen that Thatcher has destroyed his life - and the very fabric of Britain. It’s the most openly melodramatic (and perhaps the most historically false) depiction of the Iron Lady in the season.

QUEEN ELIZABETH: What is it you'd like me to do?

FAGAN: Save us all from her.

FAGAN: Thatcher! She’s destroying the country. We’ve got more than three million unemployed; that’s more than at any time since the Great Depression. Doesn’t that bother you?

QUEEN ELIZABETH: Yes, it bothers me greatly, but there’s nothing I personally can do about it. When you’ve been in my position as long as I have, you see how quickly and how often a nation’s fortunes can change. Joblessness, recession, crises, war- all of these things have a way of correcting themselves. Countries bounce back. People do. Because they simply have to.

FAGAN: That’s what I thought. That I’d bounce back. And then I didn’t. First the work dried up, then my confidence dried up. Then the love in my wife’s eyes dried up. And then you begin to wonder, you know, where’s it gone? Not just your confidence your happiness, but your…they say I have mental health problems now. I don’t, I’m just poor.

QUEEN ELIZABETH: The state can help with all of this.

FAGAN: What state? The state has gone. She’s dismantled it along with all the other things we thought we could depend on growing up. As sense of community, a sense of, you know, obligation to one another. A sense of kindness. It’s all disappearing.

QUEEN ELIZABETH: I think you’re exaggerating. People still show kindness to one another, and they still pay their taxes to the state.

FAGAN: And she spends that money on an unnecessary war and declares the feel-good factor is back again.

It is worth noting the real Fagan says that he never talked to the Queen about Thatcher at all during his famous break-in. As for the mental health problems, he spent three months in inpatient psychiatric care after breaking into Buckingham Palace.

Despite this ridiculous scene, Thatcher also has a chance to defend herself in the series, although she's still portrayed as frigid and unfeeling. In episode 8 "48:1", she confronts the Queen after hearing reports that the sovereign doesn't much care for her personally.

THATCHER: "Uncaring, confrontational, and socially divisive." That's how these sources so close to the Queen describe me.

THATCHER: That I lack compassion. And that my government has done irretrievable damage o the country's social fabric. My responsibility, for the time I have in office, is to put sentimentality to one side and look after this country's interests with the perspective of a cold balance sheet and, while I greatly admire your sense of fairness and compassion for those less fortunate than us-

QUEEN ELIZABETH: Do you? Really?

THATCHER: Let us not forget that, of the two of us, I am the one from a small street in an irrelevant town with a father who could not bequeath me with a title or a commonwealth, but only grit, good sense, and determination and I don't want peoples' pity or charity or compassion. Nothing would insult me more. My goal is to change this country from being dependent to self-reliant and I think, in that, I am succeeding.

QUEEN ELIZABETH: I have had to learn many difficult lessons as sovereign...

THATCHER: Britons are learning to look after number one, to get ahead, and only then, if they choose, to look after their neighbor.

QUEEN ELIZABETH: Of those...

THATCHER: No one would remember the Good Samaritan if he only had good intentions. You see, he had money as well.

In the final episode "War", the Queen admits her respect for Mrs. Thatcher after the PM is ousted and honors her with the Order of Merit.

Thatcher is complimented in the series for not being afraid to do difficult work that will make her unpopular, although her unpopularity could be debated seeing as Britain’s first female Prime Minister held that position for eleven years.

Of course, they went over-the-top in their censure and were more reserved in their praise, but at least Thatcher got the chance to defend her legacy (on-screen, at least). That's more than most conservatives get in Hollywood.