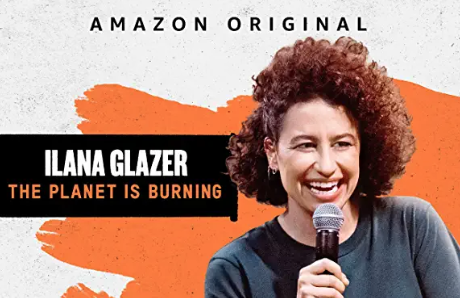 I had the displeasure of watching Ilana Glazer's (Broad City) standup comedy special "The Planet Is Burning," released January 3, which earned its low 2.5 star rating on Amazon Prime.

I wasn't expecting to find the humor particularly to my liking, but I wasn't expecting to find it so objectively unfunny, either. It looked like it was filmed in a pretty small venue, and the meager audience barely even laughed at her jokes. That is, if one can call them jokes. Glazer really just sort of said things, frequently without discernable punch lines, while the audience laughed uncomfortably when they guessed it might be the right time.

Glazer started the special by entering the stage to Rihanna's "Sex With Me" while twerking and it pretty much went downhill from there. Her first real joke doesn't appear for four minutes, and it's basically a retread of a joke we have all heard a thousand times. It's not just that it isn't funny; it's not clever at all.

So, the government is on fire, and so is the planet. The planet is on fucking fire and the mean dinosaurs in office just don't seem to mind. No. I think they want us to die because they're about to die. That is the ultimate FOMO.

That's pretty much as funny as it gets.

From there, she starts talking about how great it is that people are non-binary now. She shares the percentage which she feels she is female (60 to 70 percent, if you're curious) as well as her ratio of straight to gay (2:1). She then shares her thoughts on "Guys who, like, resentfully fuck their wives and then run to work and create policy against women's bodies. Those guys are gay? I have no idea. I don't know what's going on there. What's the diagnosis?"

Perhaps the only genuine moment in the special was when she talked about how much she enjoyed making her house a home for her husband. Unfortunately, she began that section by saying "don't tell my feminist friends" because, as well all know, feminism in 2020 is not about women doing what makes them happy but by conforming to what feminists think should make women happy.

What did not make this woman happy was the full ten minutes that she took to discuss periods. Ten whole minutes out of a one-hour special! Is that female comedy now? A lot of it was just a description of menstrual cups and how to use them with no comedic value whatsoever. It wasn't that the jokes fell flat, there were simply no jokes. Just a how-to video, really, with some awkward laughter.

We were also subjected to Glazer's thoughts on Nazi's in today's America. She is disappointed that they don't have cohesive branding like Hitler's Nazi's did. No stylish Hugo Boss uniforms, just "a red hat." Need I say more?

Like I said, this special earned its low rating. That was one long hour.