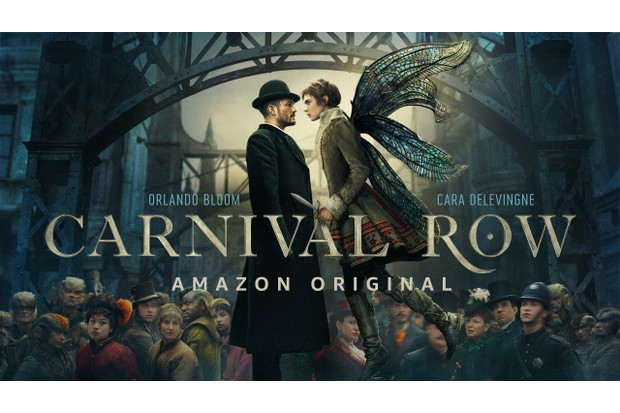 Carnival Row, a new series on Amazon Prime, could have been an entertaining murder mystery featuring star-crossed lovers but was, instead, a heavy-handed immigration allegory in which anyone who advocates for laws to be enforced is just a racist.

Rycroft "Philo" Philostrate (Orlando Bloom), a human man, and Vignette Stonemoss (Cara Delvigne), a fairy woman, met and fell in love when he was a soldier occupying her land, Tirnanoc. When the show opens, Philo and Vignette have been separated by the war. He has gone back to the Republic of Burgue and she is left as a rebel in her land, which has fallen to invading forces, The Pact. She, too, ends up in the Burgue in episode one, the sole survivor from a shipwrecked boat of refugees from Tirnanoc.

In the Burgue, non-human creatures, called the “critch,” are treated as second-class citizens and, in episode one "Some Dark God Wakes," the government debates how to handle the influx into the city. It sets up the conflict of the entire series.

LONGERBANE: The critch are swarming our city. They are changing the very fabric of our society- and not for the better. They bring vices, wantonness, the scourge of lixer addiction, the worship of strange gods. Our streets are safe no more. Whole boroughs have become off-limits to decent citizens. The people look to their chancellor for relief. What do they find instead? A majority content to do nothing!
BREAKSPEAR: It would seem that the good proctor Longerbane has forgotten why the fae folk were forced to flee their lands in the first place. Because the party he leads chose to let Tirnanoc fall into the hands of the Pact!
LONGERBANE: Let's not forget which party dragged us into that misbegotten adventure in empire making.
BREAKSPEAR: It was a war we could have won. It was a war we should have won!
LONGERBANE: See how he dodges the issue at hand. Burguishmen can't find honest work because the critch do their jobs for a pittance.
BREAKSPEAR: If Proctor Longerbane wishes to send the fae folk back to whence they came let him amass the majority of votes to do so.

How many times did you roll your eyes?

Vignette earned her way in as an indentured servant and is forced to wear a corset that binds her wings (The lady of the house also has to wear a corset, for what it’s worth). Vignette acts as though she’s being abused because she’s asked to do things like clean the bathroom and can’t come and go as she pleases. When the man of the house offers her a trade of sexual favors in exchange for her freedom, she refuses. He tries to force her and she escapes, turning to a life of crime.

This puts her at odds with Philo, who is a police inspector. And the police, of course, are on the side of humans, turning a blind eye to the problems of the critch, when not being outright abusive towards them. In one case, the wrong group of beings is accidentally deported, as though the deportation process is not rigorous.

Of course, things are not always as they seem. Philo has been hiding a secret that only Vignette knows--he is half fairy, but had his wings shorn as an infant so he could pass as a man, which becomes a key part of the story. "[O]ur own world is also a place of bigotry and prejudice, in which white actors get the plum roles even in stories about the experiences of the oppressed," groused an NBC News THINK piece about the casting.

As season one draws to a close, the critch are being forced into internment camps. Both Longerbane and Breakspear are dead and their children have taken over the Burgue, determined to work together against anyone non-human. Season two has already been green-lit, so I can only assume things will be even more heavy-handed.

I found the show much easier to watch if I imagined the critch to be conservatives and the humans to be leftists determined to do anything to keep them off their campuses, television shows and, really, anywhere else. It was much more realistic.