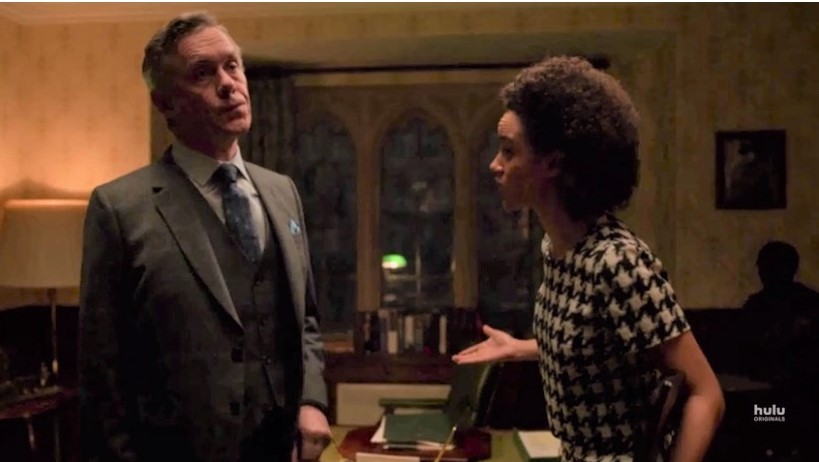 Hulu's Four Weddings and a Funeral has been largely apolitical since it premiered, but they made up for that in episode 7 "The Sound of Music," on Wednesday, a large portion of which was spent taking cheap shots at conservatives.

Maya (Game of Thrones' Natalie Emmanuel), is a liberal American woman working for a conservative Member of Parliament in London, Andrew Aldridge (Alex Jennings), the first openly gay MP of his party. When Maya runs into him at a gay club with her friends Ainsley and Tony (Nathan Stewart-Jarrett), things get ridiculous.

Andrew starts to tell the story of his coming out in 2002, and Tony says that, since coming out, Andrew has done nothing for gay people. Andrew replies that Tony is mistaken, his voting record is impeccable. Tony replies, "Yes, on issues like cutting inheritance tax for millionaires, and 'keeping Britain British.'" He concludes, "You may have been brave once, but now you only help rich, old, white people. You're a gay dinosaur. That's why everybody calls you LGBT-Rex."

Immediately thereafter, we find out Tony's real problem. He and Andrew spent the night together two years ago and Andrew doesn't remember him. This isn't about politics at all, Tony's feelings are hurt. Perhaps rightfully so, but the show decided to have Tony make a political speech as a reaction.

Later, Andrew goes to see Tony and apologize. Tony replies, "For what? Brexit? Austerity? Fracking? That waistcoat?" Andrew invites Tony to a production of The Sound of Music at a community theater of which he is personally funding the renovation. Although he's partly paying for the renovations to help his public image, Andrew doesn't tell Tony that he's behind it, so Tony turns him down.

However, politics ends up getting in the way. The theater isn't in his district, so another member of parliament gets upset that Andrew is stepping on toes. Andrew doesn't know if he can go to the show anymore, but Maya is incensed because his attendance is needed to raise the profile of the production and help them sell tickets to raise money. She storms into his office to yell at him about it and, during her tirade, tells him, "My generation is drowning in your generation's debt and we're all gonna die of climate change!"

Andrew: Don't lecture me. I've been in office since before you were born. The problem with your generation is you don't know what a hard choice looks like.

Maya: First of all, my generation is drowning in your generation's debt, and we're all gonna die of climate change. Second of all, "It is incumbent on us as public servants to give voice to the voiceless."

She then reminds him of a speech he gave when he was a young, idealistic MP. He decides to go to the show after all and -  wouldn't you know it - Tony shows up to give him a chance. Andrew isn't such a bad guy after all. None of the anti-conservative stuff had anything to do with, well, anything. They just smashed it into the show to make themselves feel better.