Woke NBC Drama: Teens ‘Over Binary Language,’ Bisexuality ‘Part of Who I Am’ 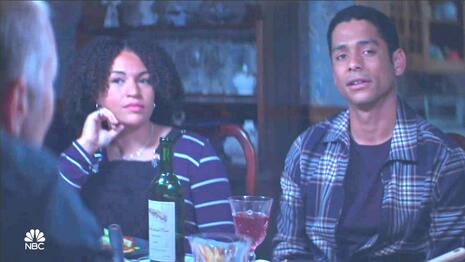 During the October 18 episode “Mask On Mask Mask Off,” a flashback memory shows Eric revealing to Joe that he is bisexual when they are younger teens. (The show follows Joe on each of three different paths he could have chosen for himself, based on decisions he made at his college graduation.) The new revelation of Eric’s sexuality comes up in two of the three timelines and is just as “woke” as you’d expect.

In one path, Eric (Charlie Barnett) is helping Joe's (James Wolk) wife run her Congressional campaign. Eric has a crush on and begins to date Sai, a staffer who is gay, who also warns the candidate against using "binary language:"

Sai: Can we cut the "ladies and gentlemen" at the beginning? A lot of teen voters are gonna be there and they're over binary language. Maybe just say "esteemed guests" instead.

Eric is a single father to a baby girl after his gay partner split because, as Joe puts it, he was “too dumb to realize how awesome fatherhood is." (At least, this is something the show gets right.)

In a separate timeline, Eric is married to Mallory (Gabrielle Byndloss), who is pregnant with their child. He expresses frustration about how Mallory may have applied for a preschool too late for their yet-to-be-born child, and so they may be shut out. Eric brings up the race and sexual orientation of the families whose children attend the preschool to knock it as not being diverse enough while over for dinner with Joe, Joe’s mom, Gwen (Anne Ramsay), and his Uncle Frank (David Warshofsky) and Aunt Meg (Sarah Charipar):

Mallory: So the admissions director tells me our chances are low because I applied too late. Our kid isn't even born yet. It's a preschool.

Gwen: I'm sure they would change their position if you gave them a hefty donation, 'cause...

Mallory: I do too.

Eric: Right? Two Black families, and not a single queer parent in the entire school.

Frank: So just don't tell them you're queer.

Frank: What? Oh, I'm sorry, Eric. Is that one of those words that only you're allowed to say? Because times are changing fast for an old man like me.

Eric: No, it--it is not that. Queer is my preferred word, but I love you for asking.

Meg: I don't see what the big deal is. Back when I was in college, all the girls were bisexual.

Eric: The thing is, Frank, I don't want to have to live in a closet. I can't hide that I'm a biracial black man, right? Why should I hide that I'm bisexual? Even in a monogamous marriage with Mallory, it's still a part of who I am. Does that make sense?

Considering that Eric himself acknowledges that he is in a monogamous relationship with his wife and is thus only having sex with a woman and choosing not to act on his bisexuality, that it would come up at all is cause for confusion in this woke storyline. Nobody needs to know what kind of sex someone likes, especially not a preschool. It may make “perfect sense” to Uncle Frank, but it doesn’t make ANY sense to the rest of us.

Conservatives Fight Back! The show was Microsoft; Olay; Capital One; T-Mobile; Amazon; and Samsung. Contact them to let them know what you think about this bisexual, non-binary episode.