Capitalization Is Oppression: Using Only Lower-Case Latest Act of ‘Resistance’ 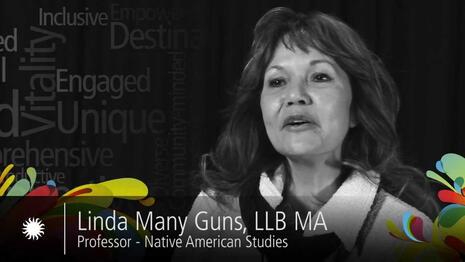 This outlandish notion comes from Dr. Linda Manyguns, the new associate vice-president of Indigenization and Decolonization at Mount Royal University in Calgary, Canada. In one of her first acts of decolonization, on August 30, she put out a statement about the use of lower case as “resistance.”

The poorly written piece starts: “this [sic] is a beginning effort at describing the use of lower case on the website of the office of indigenization and decolonization.” So far, the effort is not going well. But, at least, she seems to acknowledge this nonsense will take a long-term effort to attempt to explain.

the goal of equity, diversity and inclusion of all people is synonymous with the interests of Indigenous people. we support and expand the goal of equality and inclusion to all forms of life and all people. we join leaders like e. e. cummings, bell hooks, and peter kulchyski, who reject the symbols of hierarchy wherever they are found and do not use capital letters except to acknowledge the Indigenous struggle for recognition.

The last sentence implies that those “leaders” use lower case in solidarity with the Indigenous cause, but E. E. Cummings (his name is correctly stylized in caps) played with typography and punctuation as part of his poetry, it had nothing to do with native peoples. Bell Hooks’ university biography says “she has chosen the lower case pen name bell hooks, based on the names of her mother and grandmother, to emphasize the importance of the substance of her writing as opposed to who she is.”

Peter Kulchyski, a professor of Native Studies, is most in line with this ideology. He has written, “my refusal of capital letters as in part a refusal of grammatically inscribed hierarchies, will 'i' hope be read in the spirit of [Gilles Deleuze’s] own inventive and creative approach to written expression,” and has been said to refuse use capital letters to “reject the symbols of hierarchy.”

Apparently, it’s not only hierarchical, but capitalization is oppression, according to Dr. Manyguns:

we resist acknowledging the power structures that oppress and join the movement that does not capitalize.

the office of indigenization and decolonization supports acts that focus on inclusion and support the right of all people to positive inclusion and change.

Far from supporting positive inclusion, this deconstruction of language and grammar is exclusionary for those who depend on standard orthography for their reading comprehension. Not to mention, this grammatical terrorism from minority activist groups is an editor’s worst nightmare.

Language is what helps us to communicate and understand each other, why would they want to create further barriers that create confusion and division? Like BLM protesting the National Anthem, this nonsensical demonstration puts up unnecessary barriers and shifts attention away from the cause they are trying to highlight so the focus is instead on their ridiculous and offensive antics.

Let's hope this latest Canadian craze doesn't catch on south of the border.