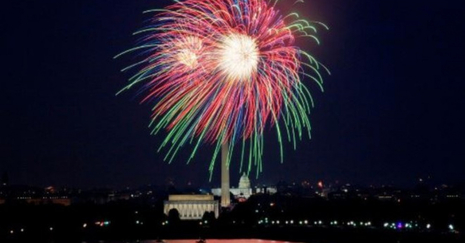 The woke scolds at National Geographic who want to play the race card unsurprisingly also want to take the joy out of celebrating the Fourth of July with fireworks.

On Friday, ahead of Independence Day weekend, author Madeleine Stone bemoaned “The hidden toll of July Fourth fireworks.” And, because this is 2021, the reason is because “vulnerable people and communities of color are disproportionately exposed to air pollution from firework celebrations.” Cancelling fireworks for racial AND environmental justice – that’s a twofer!

The article is even more specious than you’d expect.

Cautioning about air pollution from fireworks, Stone confidently warned, “But not everyone is equally at risk from the noxious particles that suffuse the sky during our pyrotechnic light shows. In California, for example, vulnerable populations are more exposed to fireworks pollution on the Fourth of July.”

Paradoxically, she later wrote, “Not much is known about who is most exposed,” and quoted an air pollution researcher saying, “There are very few studies that have looked at the association between fireworks related air pollution and health.”

So, take the new study involving “environmental justice” by University of California – Irvine researchers with a large grain of salt.

As National Geographic told it, for this study, they used a sample of only 751 “home air-quality monitors” across the entire state of almost 40 million people encompassing almost 164,000 square miles to conclude that “Fourth of July fireworks pollution, although transient, can be significant.”

Vulnerable populations appear to be more exposed to this pollution: On average, the authors found that PM2.5 spikes around the Fourth of July were higher in urban census tracts in Southern California, areas that tend to have higher asthma rates, more older individuals and small children, and more Black and Hispanic residents, compared with rural census tracts and those further north…

In other words, there are more fireworks in urban places, where there are more kinds of people more densely concentrated, than in rural areas. Shocker!

With no public fireworks last year due to COVID, all the increased pollution (“Los Angeles County pollution levels soared up to 10 times higher than average on July 4, 2020”) was due to urban communities harming themselves by lighting off illegal fireworks, but lack of law enforcement is blamed (gee, wonder why police would’ve taken a step back in cities in July 2020):

The consequences of poor enforcement of fireworks regulations were laid bare last Fourth of July, when the cancellation of municipal fireworks displays due to the coronavirus pandemic prompted many people to purchase online and shoot off illegal fireworks, including bottle rockets and aerial shells at home. (In California, only non-aerial fireworks like sparklers are allowed for at-home use.) As a result, fireworks pollution was elevated across California in 2020 compared with 2019. Considering the established link between air pollution and more severe COVID-19 outcomes, [Jun Wu, senior author on the study] says last year’s pyrotechnics might have worsened the pandemic.

Add “prolonging COVID-19” to the list of fireworks’ crimes against humanity!

Ironically, the woke, presumably pro-“defund the police” crowd is pushing for a law enforcement “crack down” on vulnerable minority neighborhoods. It’s ok because it’s for their own good. What could go wrong:

Given all the risks, Wu suggests it’s time for city and local governments to more aggressively crack down on illegal fireworks—something several California cities are attempting to do this year—and consider shifting to other types of public displays, such as drone light shows. Individuals susceptible to air pollution can limit their exposure on the Fourth of July by wearing masks or watching the show from indoors, Wu says.

“Wearing a mask is not this foreign concept anymore,” she says.

Ding! Ding! Ding! With the addition of a new reason to keep people wearing masks in the summer heat, this article wins libtard BINGO!

Let there be no doubt: it’s not just fireworks or American independence – they don’t want you to enjoy ANYTHING.