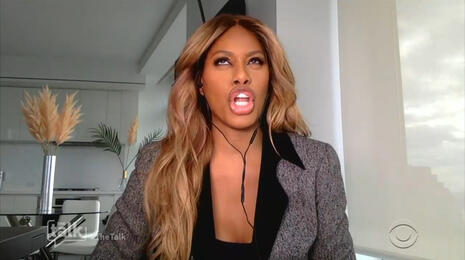 Trans actress Laverne Cox is blaming conservatives for making the transgender exploitation of vulnerable youth such a contentious issue.

Cox, who spoke to Variety in an article posted on June 7, presumably for LGBTQ “Pride” Month, will have increased cultural influence and power with a new role as E!’s red carpet host. As Variety's Caroline Framke hyped, “Cox put a face to a long derided community that was long overdue such consideration.”

"On the other hand, however, trans people are facing unprecedented legal threats to their humanity as anti-trans bills hit states across the country, targeting trans youth in particular without any basis in scientific fact," Framke catastrophized. Hilarious that the people who deny biology want to talk about scientific fact!

Cox, too, poured on the hysteria, claiming dehumanization:

Absolutely, we must insist on recognizing the humanity of everyone (including the unborn!) but that’s a non-sequitur when it comes to protecting girls’ sports and saving children from making life-altering decisions they don’t have the capacity to fully comprehend and consent to yet, like genital and body mutilation and taking dangerous hormone and puberty blocker drugs. This is especially important when “about 80 percent of kids with gender dysphoria” grow out of it.

To Cox, these attacks represent a greater, crucial misunderstanding. “Underlying all this is so much of the work we still have to do about trans people,” she insists. “People still don’t fully believe that trans women are women, trans men are men, trans girls are girls, trans boys are boys and nonbinary people are real. So we still have to understand that trans people are who we say we are.”

Seriously, the standard is to “fully believe” in trans ideology and the rewriting of basic biology? Why isn’t it enough to say to adults, “Ok, you may look, believe, and act however you want with your own body, just don’t push your beliefs on me”? Why does the entire world have to change millennia of scientific, medical, lingual, societal, and cultural norms and understanding to cater to a tiny fraction of less than 1 percent of the total population? And why do we have to subject impressionable children to it, too?

Cox, who wants to be considered the same as a biological woman despite having none of the equipment necessary to bear children, lectured on parental rights. Just imagine this being said about child abuse like Munchausen by proxy:

… it’s just no other parent’s place to tell another how to parent. If it was another issue, we would be like, “Excuse me, this is my child, this is my life, this is their health care, so stay out of it.” That’s what we really should be doing. It’s just fearmongering. It’s deep, that with all the things going on in the world, this has become the priority. That also says a lot, right? Restricting voting and making sure that trans children can’t play sports is their legislative agenda.

Nice twisting of election integrity laws to go along with the perversion of laws protecting children.

Cox went on to concern troll about what kind of messages the “conservative party” should have:

…I think a lot of conservatives were very frustrated when marriage equality became the law of the land, and when that decision came down they were like, “OK, what can we do to fearmonger? What can we do to divide people on cultural issues?” The conservative party doesn’t have an economic message for working class people, so they are weaponizing cultural wars. They’re talking about Dr. Seuss and transgender children playing sports when there’s still a global pandemic and people have lost their jobs. Eviction moratoriums are gonna expire any minute now, people need material access to material resources. And instead of having messaging around that they’re trying to use trans people and cultural wars to gin up sort of this sort of outrage.

Yeah, as if we made this choice and it wasn’t leftist culture jamming it down our throats. It’s conservatives who made up all these trans females suddenly dominating women and girls’ sports and taking spots away from real women and girls? We’re the ones pushing dangerous drugs and procedures on confused kids (the vast majority of whom would naturally go back to their original biological identity)? The backlash is a reaction by hundreds of millions of average Americans to the trans agenda bulldozing over all common sense or safety, especially when it comes to children.

We didn't start the culture wars, but we sure aren't going to back down from the fight to protect our children!