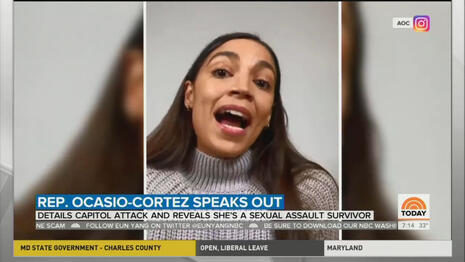 The Instagram Live presentation on her account was a 90-minute stemwinder that saw Rep. Alexandria Ocasio-Cortez (D-NY) stare into the camera and claim to have been sexually assaulted in the past as a way to explain her current “trauma,” compare Republican reaction to the riot to “the same tactics of abusers,” and dramatically recount being terrified she “was going to die” when a man pounding on her office doors came looking for her (he turned out to be Capitol police).

Caroline Framke (formerly of Vox) wrote in Hollywood trade magazine Variety about “The Extraordinary Power of Rep. Alexandria Ocasio-Cortez on Instagram Live.” Framke was wowed by the “incredible, immediate intimacy” of watching AOC on Instagram Live and described how “it feels like witnessing a confession not from a politician, but from a friend who’d been steeling herself to share this truth all along.”

She unfavorably compared commentators on the right to AOC’s missive to before likening it to a famous innovation in presidential communication:

While conservative shock jocks like Alex Jones and Rush Limbaugh or snide internet pundits like Ben Shapiro and Tomi Lahren run on loud graphics and disdain, Ocasio-Cortez most often settles into a lo-fi, straightforward approach that radiates calm rather than fury. FDR had Fireside Chats to reassure and inform his public; AOC has Instagram Live.

“It’s not just an effective piece of messaging, but an extraordinary moment of empathy, broadcast live for everyone to share,” Variety concluded in what amounted to a 5 star review.

Another entertainment outlet, Rolling Stone, focused on AOC’s revelation of a past sexual assault in order to attack those who questioned her account of January 6 in “Alexandria Ocasio-Cortez Said Something Genuine, So Of Course Men Reacted Poorly.”

Ironically, Michael Tracey was quoted as one of those aforementioned men and, instead of being an example of a poor reaction, his words were devastatingly incisive:

“This is a masterclass in emotional manipulation — a genuine political/rhetorical skill. Gotta hand it to her,” wrote infamous Twitter contrarian Michael Tracey. Though he attempted to clarify that he was not referring to her admission that she was sexually assaulted, he later doubled down on his statement. “She invoked her alleged sexual assault in order to shame as abusive those who don’t uncritically affirm her histrionic account of what occurred at the Capitol. If you don’t see the manipulativeness inherent in that rhetorical tactic, you are delusional.”

Indeed, the article went on to do just that, extending #MeToo’s “believe all women” mantra to Ocasio-Cortez’s January 6 story because she brought up sexual assault:

The allegation that AOC’S Instagram Live was part of some elaborate political calculus is highly cynical and paranoid at best, and stunningly callous at worst. Absent clear and compelling evidence, there is no reason to believe any woman is lying about experiencing something as tragically common — and as rarely subject to false reporting — as sexual assault. What is worth noting is why men like Tracey would feel so compelled to poke holes in AOC’s account of her own experience, as if they were the ultimate arbiters of some elusive ideal of truth and integrity. It’s almost as if, by refusing to concede the possibility that a woman had a terrifying, common experience, they don’t have to face the truth: that there are victims all around us, as well as perpetrators.

It's almost as if, by refusing to deal with any claims other than the unprovable sexual assault, they don't have to face all the holes in the rest of her story.

The entire stream was AOC at the height of her rhetorical powers. It showcased her unique ability to not just communicate to the public compellingly to get a political message across, but also authentically, giving the most in-depth, extremely personal account we have yet heard from a lawmaker about what it was like to be inside the Capitol that day. It was also a move of defiance against her Republican colleagues, who have been trying to deflect from their own culpability in the January 6 events by minimizing her (and others’) experiences, insisting that everyone should just move on.

The Cut emphasized the personal nature of AOC’s video, as if that makes it the definitive account of what happened and proves the guilt of Republicans – a perfect example of the “emotional manipulation” Tracey noted succeeding with a friendly audience:

By putting it in such stark personal terms, AOC makes it impossible to overlook the lasting harm — and points out the cowardice, cruelty, and abject absurdity in the GOP’s demand that everyone just move on. How could they? The wounds haven’t healed, and won’t without actual accountability. …

By personalizing the violence in great detail, and refusing to censor herself or downplay her emotions, she made it all the more difficult for Cruz, or anyone else, to silence her by saying she was exaggerating what she felt or that she is at fault for sowing divisiveness. There is no denying, after hearing her harrowing account, that Cruz, Hawley, and other instigators must face a reckoning.

Meanwhile, while other leftists were praising the importance of AOC’s sexual assault claims and intensely personal and emotional story, in comes Slate to scold “Alexandria Ocasio-Cortez’s Sexual Assault Revelation Isn’t the Story:”

But this disproportionate focus reveals a tendency to define women, people of color, and particularly women of color by their personal experiences and particularly their personal traumas, rather than by their beliefs and opinions. That tendency begets another assumption—that their beliefs and their opinions are probably overly informed by these traumas, which makes them easier to dismiss as purveyors of pure emotion rather than informed thought.

Of course, this is nonsense. To the left, "personal experiences and particularly personal traumas" are exactly what are used to determine if someone's beliefs and opinions should be heard.

If this back and forth in liberal logic gives you whiplash, you’re not alone. There are complicated rules on the left about what you can say about AOC’s February 1 Instagram Live video, but one thing’s for sure – anything less than full-throated praise and support for every single word she said is not allowed.