Past and Current Employees: Planned Parenthood ‘Steeped in White Supremacy’ 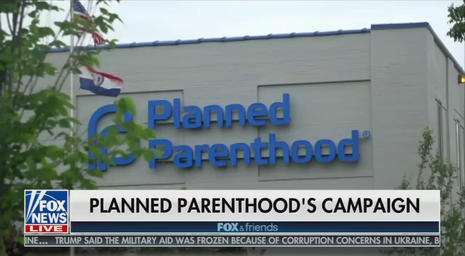 It appears that way, at least for their largest affiliate, Planned Parenthood of Greater New York (PPGNY). The woke mob is trying to take down PPGNY CEO Laura McQuade, whom they accuse of having a “Trumpian leadership style,” in a story that's only been covered by a handful of online outlets.

An open letter to the PPGNY Board of Directors signed by 300 current and former staff members on June 18 alleges “abusive behavior,” “financial mismanagement,” “racism and weaponizing of the work of diversity, equity and inclusion against staff,” and “decimation of institutional knowledge due to unprecedented rates of staff turnover.”

This is definitely part of a racial reckoning; they admit to having been “inspired and emboldened by national movements led by Black people holding organizations and institutions accountable and working to dismantle systems of oppression and white supremacy.” And, let's be honest, nothing says "oppression" and "white supremacy" more than Planned Parenthood's targeting of black babies in the womb.

They are also refreshingly honest about Planned Parenthood having “a history and a present steeped in white supremacy:”

Planned Parenthood was founded by a racist, white woman. That is a part of history that cannot be changed. While efforts have been made to undo some of the harm from institutional racism, many of these issues have worsened under McQuade’s tenure. After years of complaints from staff about issues of systemic racism, pay inequity, and lack of upward mobility for Black staff, highly-paid consultants were brought in three separate times to assess the situation. Each time, employees of color were brutally honest about their experiences, but nothing changed. It is not possible to do justice to the scope and gravity of this issue here.

There is a separate letter written by “both current and former BIPOC (Black, Indigenous, People of Color) employees” of PPGNY “to expand on the issues of racism and anti-Blackness in our workplace mentioned in our general open letter.”

According to this group, PPGNY under McQuade “has effectively gaslit and silenced their marginalized staff thus creating a toxic work environment,” continuing:

The PPGNY Senior Leadership team, despite the visual appearance of diversity, has repeatedly weaponized the language of diversity, equity, and inclusion. Rather than using their true definitions, senior leaders and upper management have used these terms to manipulate and silence those with differing opinions and perspectives. They have leveraged identity politics by putting Black and other people of color in positions of leadership who actively participate in harming Black staff and other staff members of color below them.

At this point, PPGNY’s attempts to present itself as a diverse workplace have been carefully orchestrated and superficial at best. PPGNY repeatedly tokenizes their Chief Equity and Learning Officer, a Woman of Color who is not of African descent, as the “voice” for BIPOC staff. The decision to hire a non-Black person in this role exemplifies the ways in which white-led organizations use non-Black people as a buffer to actually confront and uproot anti-Blackness within organizations.

So, by the way, it’s not enough to have “BIPOC” in leadership positions, they have to be the “right” ones because of “class tensions” between leadership and staff of the same race.

They also claim illegal employment discrimination on the part of PPGNY because “White and non-Black employees are still given more pay and more advancement opportunities than their Black colleagues.”

The entire group is demanding:

1. The immediate removal of Laura McQuade as CEO of PPGNY and all leadership who enable her directly or who are complicit through inaction

3. A thorough, independent investigation into our above mentioned allegations of abuse and financial malfeasance

4. A new independent, external, experienced leader, hired by an independent, expert party, in close cooperation with staff and centering our patients and the communities we serve, to take control and help restore and improve upon the organizational culture of all of our legacy affiliates

After the board put out a statement on June 19 saying it “fully supports” McQuade, the group responded, “We are not surprised, this is exactly how white supremacy ultimately functions–to protect itself, no matter the cost.”

They vowed, “It is time for a reckoning at Planned Parenthood. We will not give up. We are organized, we are unified, we are growing, and we are just getting started.”

To which we say, keep it up, bring the whole thing down! This couldn't be happening to a more deserving organization. Let's see the media try and unpack this one.