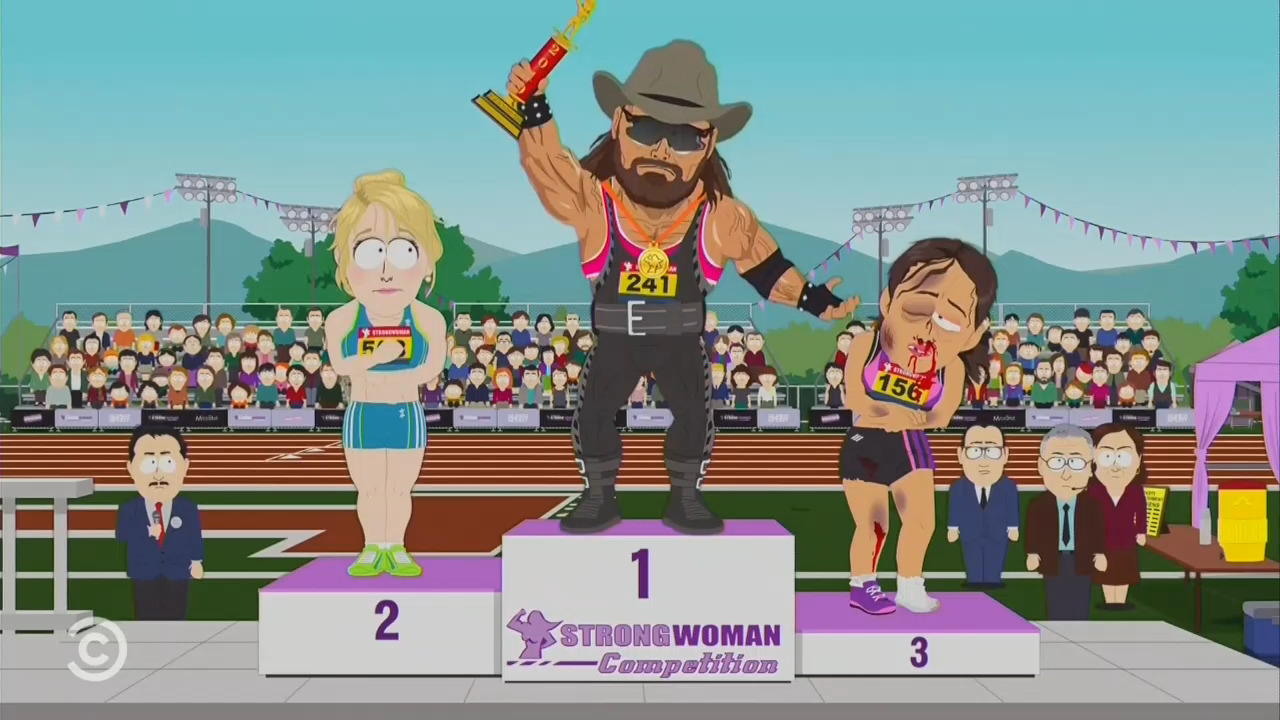 On Wednesday, South Park illustrated the absurdity of allowing men who identify as women into female athletic competitions, in a way only South Park can, in the episode titled "Strong Woman."

PC Principal's girlfriend and mother of his PC Babies, Vice Principal Strong Woman, sought to defend her title at the Strong Woman Competition, but not all went as planned when a trans athlete in the mold of former WWF wrestler Macho Man joined in and beat up on the competition:

Perry: Now, this is the first year that a trans woman is in the competition. How do you feel about that?

Strong Woman: Amazing. I feel honored to be a part of history. I have a lot of incredible trans friends who are athletes, and so we're all inspired this woman's competing.

Perry: Uh-huh, and uh... Have you actually ever met Heather Swanson?

Strong Woman: Uh, no, I've never competed against her before. No.

Strong Woman: Well, what is an average trans athlete? Honestly, I find that kind of bigoted, David.

Perry: Okay, Heather Swanson is actually joining us now. Ms. Swanson, how does it feel to be competing today?

Heather: I can't tell you how free I feel now that I've started identifying as a woman. Now that I can compete as female, I'm ready to smash the other girls!

Perry: And is it correct you just starting identifying as female two weeks ago?

Heather: I'm not here to talk about my transition. I'm here to kick some [bleep] ass. Let me tell you something, Dingleberry –

Heather: I'm gonna roll up the other women here, and I'm gonna smoke 'em. I am the strongest woman this state has ever seen!

Perry: Any words for the challenger, Ms. Woman?

Heather: Luck is for dudes.

Strong Woman was disappointed to have come in second place, and PC Principal wondered if it's unfair, "I guess she just started identifying as a woman a few weeks ago. Doesn't really seem fair."

"Just don't," Strong Woman stopped him. "You'll upset the PC Babies." So true. You can't question even the tiniest thing about trans identity or the PC Babies of the world will go off.

PC Principal wanted to defend his girlfriend, but was called a "transphobe" by "Heather." They got into a confrontation after PC Principal heard that Heather was Strong Woman's ex-boyfriend and got fed up at Heather taunting Strong Woman again:

Announcer: Women's MMA fighting is growing in popularity and no other female fighter is as explosive as Heather Swanson. Yeah! Heather, your story is an inspiration to sports fans everywhere. Congratulations on your shocking success.

Heather: I just hope I can motivate little girls out there. Motivate them to understand that I will beat them at any sport they try. Motivate them to run away like that chicken shit Strong Woman did because I –

PC principal: Alright. Alright. That's enough. You, uh... You made your point, Heather. We get it, okay?

Heather: Oh, hey, Transphobe. This is a nice surprise.

Strong Woman: Oh, God. What is he doing?

PC Principal: Look, everyone I know we're all a little... afraid to have any opinions on this stuff, but there can be situations where it's... not so easy to... what I mean is... [Stammers]

Heather: I didn't count on being the best since identifying as a woman.

PC Principal: Yeah, no shit, 'cause you went through puberty as a male, so your body is completely different.

Heather: And that's exactly what a transphobe would say!

PC Principal: I told you not to call me a transphobe. All I want is to have a discussion.

PC Principal: How am I gonna look my kids in the eyes, Strong? Since they were born, we've taught them to accept and fight for those who are marginalized, that there's no grey area when it comes to inclusion and acceptance. When I go back, all they are going to see is a big fat hypocrite. And now I just used a word to shame people with weight issues.

Strong Woman: "P"... You can't just shut down because you're afraid of how the babies are going to react.

PC Principal: But they're right, Strong. I shoved a trans person. No matter what, I have no right to judge her. Do you think -- Could you try to explain it to the babies?

Strong Woman: You know how they are. They're babies. Their minds are made up before anyone says anything.

I can only imagine how the PC Babies will howl at this episode. You know how they are.