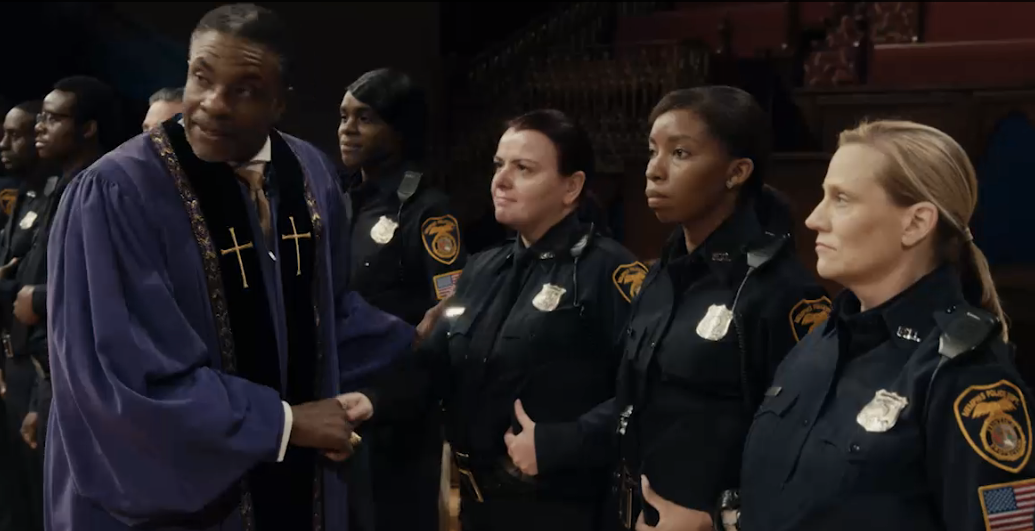 Oprah Winfrey produces and plays a minor role in a new black church drama on her OWN channel called Greenleaf. Greenleaf is a show about a black family by the same name that runs a mega-church in Memphis, Tennessee. Being as they’re all supposed to be “good Christians,” of course they all have dark secrets and skeletons in their closets.

Over the course of the first four episodes, we have learned:

Bishop Greenleaf (Keith David) is the head of the family and the church, he seems for the most part to be a very decent man and minister, but there are hints that he might be abusing the church’s tax exempt status. His wife seems obsessed with status and material things, complaining about being forced to fly commercial. Daughter Grace “Gigi” (Merle Dandridge) has finally returned to the family home after being estranged and leaving the church for many years. Another daughter is obviously married to a closeted gay man (typical TV trope) but it hasn’t been officially revealed on the show yet. The son is cheating on his wife with the church’s secretary - they have sex behind the stage during a church sermon. There are two teenage granddaughters - one of them exclaims while they’re snorting Ritalin, “I love Jesus!”

And last there’s Uncle Mac who is the church’s general counsel - oh and he rapes underage girls, including the third Greenleaf daughter, Faith, who was driven to suicide years later. Oprah's character is an aunt trying to help Grace expose her brother Mac. It’s not clear if the bishop and his wife know of his crimes; although Grace told them of her sister’s rape when they were young, Faith denied it. So, yeah, your typical TV Christians.

All this is familial drama is set against the backdrop of a police shooting in Memphis, but that story really comes to a head in the fourth episode, “Behind Closed Doors.” Surprisingly the show doesn’t go for the obvious Black Lives Matters cheap shots, in fact, the issue is dealt with in a very nuanced way. For one thing, all the major players are black - the bishop, the mayor, the teenage victim, and the officer - so that takes a lot of the more inflammatory racial connotations out of play and makes the situation more about the police force than black vs white.

The fact that the officer involved with the shooting, David Nelson, is a member of Calvary rather than an abstract faceless person is another interesting element to the telling of the story. When a rival mega-church announces plans for a BLM protest, the mayor of Memphis asks Bishop Greenleaf to show public support for the officer and the police with a “Back the Blue” initiative, complete with police officers standing up on the stage during the Sunday service.

The bishop agrees when the mayor offers him more land for the church to expand. But Deacon Connie Sykes is very upset when she finds out and threatens a walkout - “If you go through with this and let those ruffians parade up and down the aisles of our church with guns at their sides, I am going to stand up in the middle of service and walk right out, and invite every other Christian to follow me.” She is not the only one who disapproves and the bishop seems to struggle with the decision internally.

Meanwhile, the girls want to go to the BLM protest, but Gigi challenges her daughter, Sophia, on the case asking, “What if the cop is innocent, too?” She doesn’t want her daughter to go because “these protests have a habit of turning into riots.” Sophia tells a classmate, who asks, “So you mom thinks it’s more dangerous to protest than it is to let a state-sponsored killer like David Nelson go unpunished?”

The girls sneak out to attend the protest. It’s a typical BLM rally, but tame, no rioting. They name other black men who have been killed by police like Walter Scott, Eric Garner, and Tamir Rice and chant “Black Lives Matter!” a lot. Bishop Greenleaf is there and he brings the girls home.

The bishop finally gives his sermon but it’s not all pro-police propaganda. “I’m here to remind our guests, the brave men and women who police our streets, and God bless them all, sincerely, for doing a job I know I’m not brave enough to do myself. Those people you’re shooting out there aren’t shadows, they’re people,” he says. He’s tough but fair and yet Deacon Sykes and others still walk out.

In the end the bishop doesn’t take the payout, he tells the mayor “get those boys in hand,” and says, “I don’t want your land, just do a better job, kill fewer of our children and we'll be fine.”

Kudos to Oprah for creating an unexpected, but refreshing take on police shootings and the Black Lives Matter movement in the black community instead of taking the easy way out.