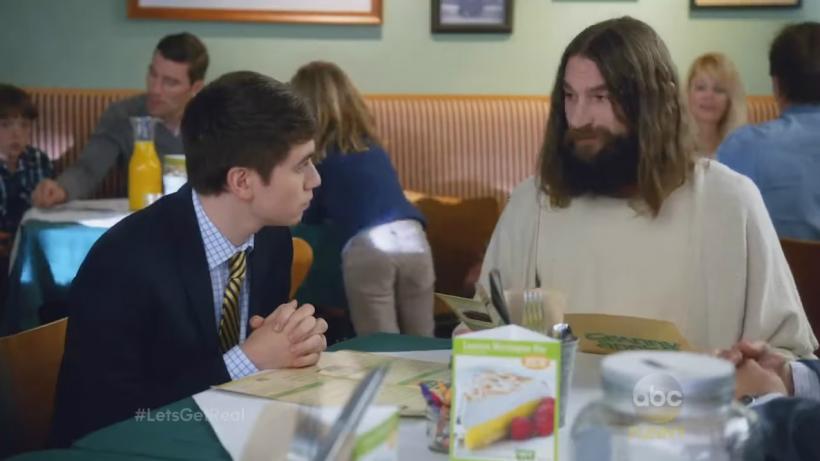 ABC’s new bigoted anti-Catholic show The Real O’Neals makes fun of Catholic teachings and believers to the point that if the network had targeted any other religious group for these attacks, journalists would call it hate speech.

In the two-episode premiere, (sandwiched around an episode of Modern Family, I’m guessing they were going for the gay-friendly audience), there were 93 separate visual or verbal reminders that this was a show making fun of Catholics, 8 admissions of Catholic sins, and I laughed out loud exactly once (at a random, non-Catholic joke).

“Jesus” appeared 52 seconds into the opening scene because “mom always told us to behave as if Jesus were watching.” Only two minutes later the gay 16-year-old protagonist Kenny O’Neal (Noah Galvin) is handed condoms and pressured to have sex by his girlfriend. Which leads to this ridiculous scene where Kenny talks to a hunky male model in the mirror, then a statue of Mary above the toilet as flushed condoms cause the bowl to overflow – “Come on, girl, help me out,” he pleads.

-Kenny: What are you doing in my mirror, shirtless cologne model?

-Model: You tell me. 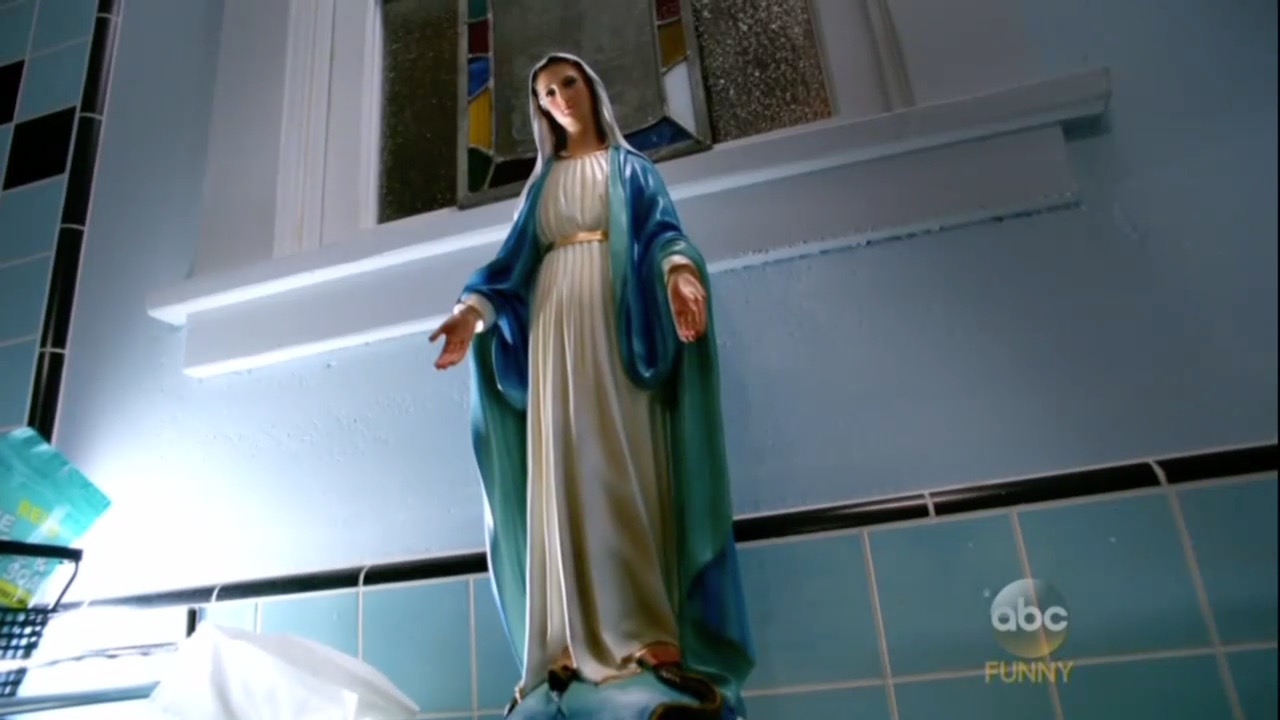 -Model: Yeah, Kenny. Why don't you come out?

-Kenny: I can't come out. Have you ever met my mom? She put a statue of the Virgin Mary over the toilet so we'd put the seat down.

The mother, Eileen O’Neal (Martha Plimpton), is a stereotypical holier than thou character who lays the Catholic guilt on thick and makes everything about religion. She pressures the waitress to donate money to poor children in Africa – “Karen needs to make her own moral decisions. It's her soul that's going to hell if she doesn't give you money.” She makes pancakes in the shape of Jesus to get her son to eat them – “This is my fourth Jesus!” She doesn’t allow her family to go in Jacuzzis; she calls it “The Devil's Chowder…because of the nudity and bacteria.”

Eileen wants to present the O’Neals as the perfect Irish Catholic family to her church community, but by the end of the first episode, all that comes crashing down as it is revealed at parish bingo night that she and her husband Pat (Jay R. Ferguson) are going to divorce, older son Jimmy has an eating disorder, younger daughter Shannon is a thief, and Kenny is gay. They’re “just your typical all-American, Catholic, divorcing, disgraced, law-breaking, gay family.”

The second episode, “The Real Papaya,” deals with the fallout from those very public revelations and the very first scene depicts Kenny waking up in Hell – which, coincidentally, is what being forced to watch a second episode of The Real O’Neals feels like.

-Jimmy: Kenny! There's no one left to wrestle, so I'm wrestling my demons. Whoa! No! No! Aah!

-Shannon: Oh. I stole it from dad, but I forgot to steal the bullets.

-Kenny: Uh, ma, you're bleeding all over the rug.

-Eileen: I'm fine. Your father's roasting vermin for dinner. I'd have given my right arm to see your father cook before the divorce.

-Pat: Oh, and one more bit of bad news, Kenny. Because of our sins, they canceled "Jimmy Kimmel live!"

-Jimmy Kimmel: Now I have to get a real job. What takes like an hour a day and pays a billion dollars?

Eileen is in denial about her son being gay and tries to convince him he’s not by getting him to have sex with his girlfriend. Seriously. She says, “It's like when you were little and you said you hated papaya, but you hadn't even tried it. Then once you tried it, you couldn't get enough.” Even worse, she tries to blame the Church, even though it was the priest who was trying to teach compassion to her.

-Kenny: Hey. Just thought you'd like to know, your plan worked. I just got done doing it with Mimi, and it was so hot and sexy that I am totally straight now.

-Kenny: What? What? No! Gross! Mom, do you realize how wrong this is?!

-Eileen: Wrong? Is it wrong for me to be worried about your everlasting soul? I talked to Father Phil about it, and he agrees.

-Kenny: Oh. Really? This was Father Phil's idea? To trick me into having sex with Mimi by dressing her up as a Mumford & Son?

-Eileen: No. While he was talking to me about compassion, I thought of it myself.

-Kenny: That is some crazy Old Testament [bleep] Mom.

-Eileen: Kenneth Christopher Sebastian O'Neal, do you pray to Jesus with that mouth? [ Sighs ] So, how's the project coming? Do we have a winner?

-Jodi: Oh, I don't really get it, but every time she says the word "Computer," I bedazzle something.

-Kenny: So, yesterday, you were telling me that premarital sex is a sin, but today, you're trying to force me into doing it with a girl?

-Eileen: Because being a -- you know, is a bigger sin.

-Kenny: Well, I am "You know," and you're gonna have to accept that sooner or later.

-Eileen: No. I cannot accept that a smart kid who's got everything going for him is gonna choose to live a life that's not normal.

-Kenny: Normal. So, you don't care if I'm happy as long as I'm normal!

-Eileen: Yes! Why can't you just spend the rest of your life with a trampy girl I can't stand?!

This vile attempt at humor has ABC teaming up with the vicious, conservative-hating Dan Savage, who is an executive producer of the show based loosely on his life. Savage is a gay sex advice columnist and a media darling who regularly tries to say outrageous things about Christians and conservatives for publicity (from telling Ben Carson to “suck my dick” to wishing Republicans were “all fucking dead”). The Supreme Court Justice’s body wasn’t even in the ground before he called for turning “Scalia” into a safe word for kinky sex, in the same way he tried to turn Rick Santorum’s last name into a disgusting word.

After ABC ordered the pilot for The Real O’Neals in 2015, MRC organized a protest, along with other conservative and religious organizations, to boot the anti-religious bigot from prime time TV. Based on these awful first few episodes, he won’t last long. Critics are already bashing the show and, bigotry aside, it is simply not funny. I'm just being real.