Vaccine mandates have been growing in popularity over the last couple months with companies like Tyson, Walmart, Google and Disney now all requiring the shot. But it’s not just theatres and businesses now. Pete Parada, drummer for The Offspring has been booted by his own band members for refusing to get vaccinated due to possible complications related to his medical history. 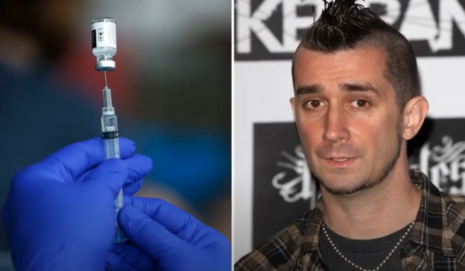 Parada has been a member of this band since 2007 and stated in a lengthy Instagram post that he plans to release music with his daughter now. The musician took to his social media account to explain why his fans would no longer be seeing him on stage or around the band during their upcoming tour.

Given my personal medical history and the side-effect profile of these jabs, my doctor has advised me not to get a shot at this time,” he wrote. “I caught the virus over a year ago, it was mild for me — so I am confident I’d be able to handle it again, but I’m not so certain I’d survive another post-vaccination round of Guillain-Barré Syndrome, which dates back to my childhood and has evolved to be progressively worse over my lifetime.

He explained that for him “the risks outweigh the benefits” and he holds no grudges towards his band. But he can’t promise that many of his fans won’t be upset, and rightfully so. We don’t accept racial discrimmination but prejudice against the unvaccinated, that’s perfectly acceptable.

The drummer went on:

I need to state, unequivocally, that I support informed consent - which necessitates choice unburdened by coercion. I do not find it ethical or wise to allow those with the most power (government, corporations, organizations, employers) to dictate medical procedures to those with the least power.

Parada also explained that those who haven’t yet been vaccinated have varying reasons for their decisions whether it’s a medical condition, “conscientious risk/ benefit analysis,” or “financial instability.”  He also had a strong message for those who aren’t willing to accept perspectives that differ from their own. “Let’s avoid the unfortunate tendency to dominate, dehumanize and shout down at each other.”

If only our politicians actually knew how to control their desire for power, or at least hide it better.

Pay attention, this is only the beginning of a much larger issue.